Some 103 schools and other education facilities were attacked in May, new data from Save the Children reveals, amid growing concern that the students’ safety could be at risk amid the continuing turmoil following the military’s February 1 coup.

The child rights organisation said improvised explosive devices and hand grenades were used in the vast majority of attacks.

“Save the Children is appalled by these attacks, which not only put the lives of children in danger, but also further compromise what is already a disastrous situation when it comes to children’s learning in Myanmar,” it said in a statement.

“Schools are protected places of learning for children that must be free from attacks at all times. Attacks on schools constitute a grave violation against children, and no school should be deliberately targeted.

The coronavirus pandemic had already deprived children in Myanmar of months of schooling when army chief Min Aung Hlaing seized power in a coup on February 1, arresting elected leader Aung San Suu Kyi and senior members of her government.

Since then, thousands have taken to the streets in protest, with the military using force to crack down on those opposed to its rule. The Assistance Association for Political Prisoners says at least 860 people have been killed and nearly 5,000 people are in custody.

During previous periods of military rule, the generals shut down universities and, since February 1, the armed forces have occupied dozens of schools and university campuses across the country. Thousands of teachers who joined the civil disobedience movement have been sacked.

While schools have been set on fire or bombed, it remains unclear who is behind the attacks. The military blames the anti-coup movement, but resistance fighters told independent media in Myanmar that they only target the military and would not harm civilians.

Save the Children told Al Jazeera it had “no reliable information” on those responsible.

UNICEF has also noted an “increase in the number of explosions at schools, education facilities and offices” in recent weeks.

“Violence in or around schools is never acceptable,” the UN agency’s Myanmar office said in a Facebook statement on June 3. “Schools and other education facilities must be protected from conflict and unrest. Attacks on places of learning and education staff and the occupation of education facilities are violations of children’s rights.”

Children in government schools began to return to their classrooms at the beginning of the month, but many youngsters have been too frightened to go.

“I wasn’t able to go to school for the whole of last year because of the virus. And this year I dare not go,” a 10-year-old girl from the central region of Magway told the organisation. “I want to go to school, but I’m scared. Although the school gates are closed, there are soldiers inside, and I’m afraid of the soldiers. I’m afraid that there might be a bomb blast at our school while we are there.”

The Myanmar Teachers Federation told The Irrawaddy, a Myanmar media outlet, that fewer than one million students had returned to school because of concerns about their safety.

Images from the first day of school posted on social media showed armed soldiers at school gates, on buses and even in the classrooms, with some apparently encouraging young children to hold guns.

“Even for us, we are anxious about potential violence when we go outside as the regime forces continue brutal actions against civilians,” the mother of a primary school pupil told The Irrawaddy, expressing concern at the presence of the military. “How could we send our child to a place where we couldn’t see if anything happened to them?”

The security forces have occupied at least 60 schools, and university campuses across the country since March, Save the Children said.

“Armed soldiers have no place in schools or other learning spaces,” it said in the statement. “Under no circumstances should children be made to hold weaponry of any kind. This highly irresponsible behavior by armed personnel is unacceptable, it puts children at risk and violates international standards for safe education.”

Myanmar is a signatory to the UN Convention for the Rights of the Child, which states that all children have the right to a safe education.

Save the Children says the international community, including governments and member states of the Association of Southeast Asian Nations, should condemn the attacks and make safe and inclusive education a priority in their response to the Myanmar crisis.

“Children often bear the brunt of conflict and violence, and the situation for children in Myanmar right now could hardly be more urgent.” the group told Al Jazeera in an email. 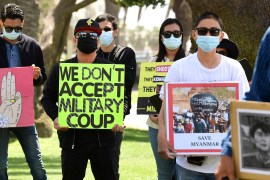 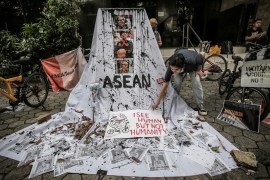 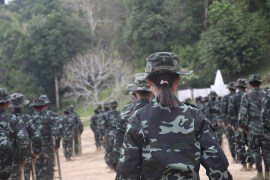 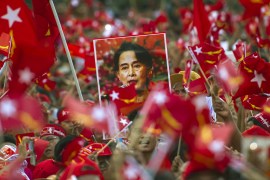