With a vote in favour of a new coalition led by Naftali Bennett, the Israeli parliament ushered in the end of an era.

After 12 years, Benjamin Netanyahu finds himself in the opposition.

However, questions over the new government’s fragility remain. The same applies to Netanyahu, who is unlikely to merely disappear into irrelevance, even though he will have to balance his aspirations for a return and his legal issues simultaneously.

The margin for error was rather narrow, but the new coalition obtained the required votes. Sixty of the 120 Knesset members voted in favour of the new government (one abstained), led by Bennett from the Yamina party and Yair Lapid from Yesh Atid.

According to the coalition agreement, which includes rotation of the prime minister post, Bennett will remain in office until August 2023 before Lapid succeeds.

The new government consists of eight parties, which range from the left to the far right. In addition, for the first time a Palestinian party, the United Arab List (Hebrew acronym Ra’am), is also a member of a government coalition.

The ideological differences are accordingly enormous in the new government, which primarily came together for one reason, Yaniv Voller, senior lecturer in Politics of the Middle East at the University of Kent, told Al Jazeera.

“The coalition was born for one main purpose – to bring Netanyahu’s rule to an end. Members of the coalition share one thing in common: the belief that Netanyahu has corrupted Israel’s political system,” said Voller.

However, with only one purpose in common, future disagreements appear inevitable. “Otherwise, this is a very loose coalition of different ideologies that at one point are bound to clash with each other,” he added.

This raises the obvious question of how the coalition aims to overcome its ideological differences, particularly considering that Bennett leans further to the right on various issues than his predecessor.

Voller said he believes that on specific issues, progress could nonetheless be made.

“Leaders of the coalition parties have described this as a ‘healing government’, whose main goal is to cure the country of Netanyahu’s divisive policies. At least in the first few months, they will more likely focus on issues that there is less controversy surrounding them – restoring public trust in state institutions; mending relations between the government and the Supreme Court; dealing with the rising crime rates in Arab society; dealing with the post-pandemic economic crisis.”

However, in other areas, the apparent diametrically opposed views could become a critical encumbrance.

“When it comes to the more controversial issues, especially concerning the conflict with the Palestinians, I believe that they will have to reach a de facto understanding. Perhaps greater freedom of voting, assuming that on such issues Likud [party] would have no choice but supporting the coalition’s right-wing,” said Voller, adding that the latter is highly speculative at this stage.

In his speech on Sunday, Bennett confirmed his proclivity for unity in lieu of division as he is acutely aware that compromises from all parties involved are required to be successful.

Addressing the conflict with Hamas and relations with the Palestinian Authority will hence be far from being a priority for now.

“I estimate that at least in its first months, the new government will try to sideline the conflict, to deal with domestic issues and de-escalate tensions within Israel, and to delay the unavoidable clash within the coalition,” said Voller.

He sees two scenarios in particular that could make or break the fragile coalition regarding this topic.

“One scenario is that Bennet, to prove that he is not a puppet of his left-wing partners, will advance a more hardline approach toward the Palestinian question, and particularly the settlement question.”

“A more optimistic scenario is one in which the coalition, to preserve some stability, will simply try to maintain the existing status quo and avoid actions that lead to escalation,” said Voller.

However, a paradigm shift towards lasting peace will remain inconceivable, Voller predicted. “I do not see this government signing a conclusive peace agreement with the Palestinians.”

After 12 years of Netanyahu and four elections in two years, Israelis will now hope for some degree of stability within its government. However, past years have shown that one should not have high expectations, and the new coalition will not change this sentiment, Voller argued.

“The coalition is mainly preoccupied with avoiding going for another round of elections. In the short-term, success would be surviving for at least a year or two, stabilising the economy, and avoiding another round of fighting.”

Considering how the previous coalition ended along with the rotation agreement that was in place between Netanyahu and Benny Gantz, leader of the Blue and White party, sceptics could argue that Bennett, a protegee of Netanyahu, may attempt a similar move to avoid a rotation after two years in office.

However, Voller said that Bennett will not utilise such measures.

“Bennett has striven to portray himself as the opposite to Netanyahu, that is, as an honest politician, technocratic in nature, and committed to clean politics. Therefore, I doubt it that Bennett will resort to adopting Netanyahu’s ploys.”

Nonetheless, Bennett has other options at his disposal.

“If Bennett senses that the partnership is not working, he will dissolve the government and go for elections. Nevertheless, he will try to avoid this step as much as possible, for the sake of preserving political stability,” said Voller. 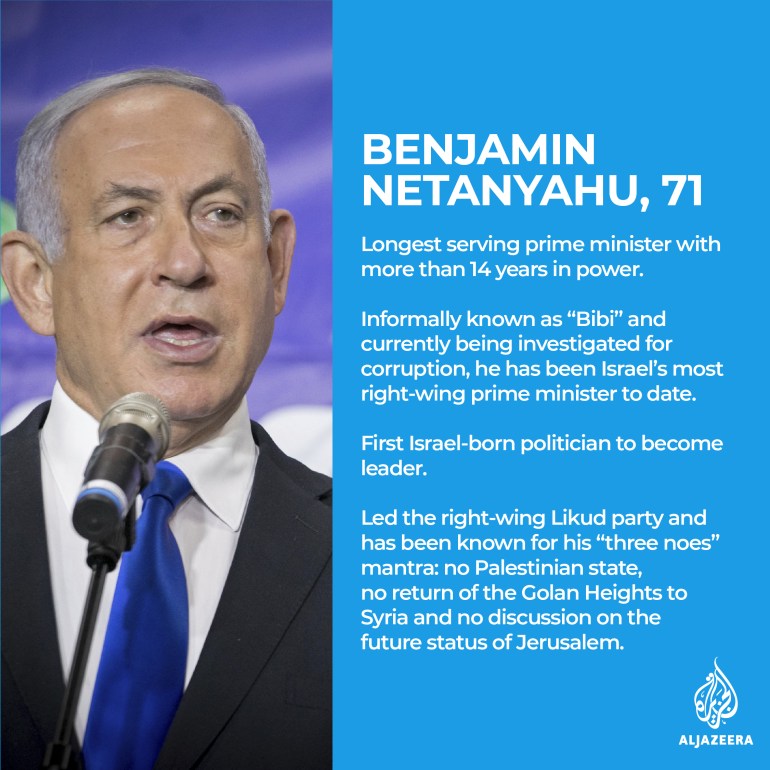 Bennett’s success is Netanyahu’s defeat. No one ruled Israel’s fate longer than the man sometimes described as “King Bibi.”

To the final minutes, Netanyahu tried to prevent the formation of the government by accusing Bennett of election fraud and attempted to pressure Knesset members into defection – without success. In his speech on Sunday, Netanyahu said he was ready to go into the opposition until he could end this “dangerous government”.

He emphasised that he had returned from the opposition once before. However, whether he can facilitate yet another return is far from certain, said Simon Mabon, professor of International Politics at Lancaster University.

“The formation of a new government after such a long period of political and electoral instability suggests that the Israeli public has, on the whole, had enough of Netanyahu’s politics and vision for the future,” Mabon told Al Jazeera.

Nonetheless, Netanyahu’s track record suggests that one must not underestimate his talent to remain omnipresent, either.

“His survival across a tumultuous period in Israeli politics is a testament to his political acumen and a reflection of how popular his right-wing world view continues to be amongst some of the Israeli electorates,” said Mabon.

Netanyahu will hence not be a silent opposition. While his tactics to stop the coalition from taking power failed, he will continue to make attempts at sabotage, Mabon said.

“His quest to bring down the government plays out by trying to disrupt the fragile coalition between unlikely allies. In part, this comes through efforts to seduce possible defectors to the Likud way of thinking.”

One has thus not yet seen the political end of Benjamin Netanyahu. “King Bibi will continue to fight – his quest for power and ego points to that,” said Mabon.

However, with his departure, avoiding legal charges will be more challenging. As Mabon pointed out, the possibility of obtaining immunity from the Knesset and further delaying his corruption trial have now become unfavourable.

“There is precedent for erstwhile political leaders to be imprisoned after leaving office, after all,” said Mabon, referring to Ehud Olmert, who, after having served as Israel’s prime minister, was sentenced to prison for accepting bribes and obstruction of justice.

The trial against Netanyahu has already commenced, yet the court is far from a concluding stage, Amos Hacmun, partner at Tel Aviv-based Heskia-Hacmun Law Firm, told Al Jazeera.

“The trial against Netanyahu is currently in the phase where the prosecution presents its evidence, and its witnesses are subjected to cross-examination by the defence attorneys. The witnesses’ testimonies just started so that there are many more testimonies to collect before it will be concluded and the defence will have its turn to present its witnesses.”

Netanyahu has been indicted on three cases, known as 1000, 2000 and 4000, accusing him of bribery, fraud and breach of trust and involve accepting gifts in return for political favours.

Case 4000, in particular, could be serious for Netanyahu, said Hacmun.

“Being accused in any of those cases is dangerous. However, Case 4000 is probably the one with the most dangerous potential since beyond the criminal behaviour of which Netanyahu is accused, in Case 4000, the amounts involved and the extent of abuse of public resources seems to be by far more than the other cases.”

Whether or not Netanyahu could face jail remains nonetheless unclear at this stage.

“There are tonnes of evidence and endless hours of testimonies that need to be considered before one can deliver a serious opinion as to the expected result of the trial. However, if the trial will end in a conviction, then it would be more realistic to expect a sentence that includes jail time than not,” said Hacmun.