The outgoing prosecutor of the International Criminal Court has sought authorisation from The Hague tribunal to open a full investigation into Philippine President Rodrigo Duterte’s ongoing war on drugs that killed thousands of people, including innocent children.

Prosecutor Fatou Bensouda, whose term ends on Tuesday, said a preliminary probe that began in February 2018 determined “that there is a reasonable basis to believe that the Crime Against Humanity of murder was committed” in the Philippines between July 1, 2016 and March 16, 2019, which was when Duterte ordered that the Philippines withdraw from the court.

The suspected crimes happened “in the context of the government of Philippines ‘war on drugs’ campaign,” Bensouda said in a statement on Monday announcing that she was seeking judicial authorisation to proceed with a full investigation.

“Information obtained by the Prosecution suggests that state actors, primarily members of the Philippine security forces, killed thousands of suspected drug users and other civilians during official law enforcement operations.”

Duterte launched his deadly campaign against narcotics shortly after his victory in the May 2016 presidential elections.

Duterte ran on a single issue of fighting crimes in the Philippines, and during his campaign and later as president, he repeatedly urged police to “kill” drug suspects.

The latest government data shows that as of the end of April 2021, police and security forces have killed at least 6,117 suspected drug dealers during operations, although earlier government figures showed at least 8,600 deaths.

A Philippine police report in 2017, however, referred to 16,355 “homicide cases under investigations” as accomplishments in the drugs war.

As early as December 2016, Al Jazeera had already reported more than 6,000 deaths in the drug war, raising questions about the inconsistency of the government’s numbers.

Rights groups say the number of deaths could be at least 27,000, and accuse the authorities of carrying out summary executions that killed innocent suspects including children. Countless people were also killed by “unknown” gunmen.

Police say the suspects were killed when they resisted arrest and became violent, but there have been documented cases of suspects being executed, or survivors saying police shot unarmed civilians.

The drug war killings have also continued even in the middle of the coronavirus pandemic and lockdown, as Duterte vowed that there is no stopping in pursuing suspects.

Bensouda said prosecutors also reviewed allegations of “torture and other inhumane acts, and related events” dating back to November 1, 2011, “all of which we believe require investigation”.

Those allegations centre in the city of Davao, where Duterte served as mayor for about two decades. In 2017, a retired police officer had linked Duterte and his men to nearly 200 killings in Davao.

He also said that the ICC “has no jurisdiction” of the alleged crimes, adding that the police officers have “the right to defend” themselves using “reasonable force” during drug operations, “and therefore, justified by the principle of necessity and proportionality.”

In an address recorded this week before the news of Bensouda’s request broke, Duterte called on human rights organisations to take a closer look into his war on drugs.

“You would notice that there are really persons who die almost daily because they fought back,” he said, warning drug dealers: “Do not destroy the country. I will kill you.”

Duterte had previously called Bensouda “that black woman”, while calling another international human rights investigator, Agnes Callamard as “skinny” and malnourished.” Callamard is now the secretary general of Amnesty International.

The “war on drugs” has been a cornerstone of Duterte’s presidency since he came to power promising to crush crime, despite criticism from opponents and human rights groups of widespread abuses.

Amnesty International welcomed what it described as a “landmark step” noting that the killings continued “unabated”.

“This announcement is a moment of hope for thousands of families in the Philippines who are grieving those lost to the government’s so-called ‘war on drugs’,” Amnesty Secretary General Agnes Callamard said in a statement.

“This is a much-awaited step in putting murderous incitement by President Dutrete and his administration to an end.”

In Manila, the news of the ICC prosecutor’s move was welcomed by human rights groups.

In a statement, Param-Preet Singh of Human Rights Watch said that Duterte’s previous threats  “may finally come back to haunt him”.

A possible investigation is “especially welcome given the United Nations Human Rights Council has yet to effectively condemn the Duterte government’s atrocities,” she said, while urging the UN body to back the probe and “course-correct” and stand up for the victims of the killings.

The International Coalition for Human Rights in the Philippines (ICHRP) also pressed the Human Rights Council to act and initiate “a long overdue independent investigation” into the killings.

Peter Murphy, ICHRP spokesperson, said the case against Duterte “is already well documented”, and it is up to the UN body to “send a strong message that it too will no longer allow the Philippine government to continue its campaign of human rights violations with impunity.”

The National Union of People’s Lawyers (NUPL) President Edre Olalia said the announcement “was all worth the wait, notwithstanding the long nights of grief and grim days of fear”.

For the #Philippines, the families of the 1000s of victims, the activists and journalists who relentlessly, despite all the risks, uncovered massive unlawful killings and impunity, denounced State incitement and demanded justice: the #ICC decision means vindication and hope

“Crimes against humanity are crimes against all. No one is exempt or invincible, no matter how arrogant the impunity, or deceiving the pretension,” he said in a statement to Al Jazeera.

In a separate statement to Al Jazeera, the human rights group, Karapatan, which has been assisting families of slain drug suspects, said the Bensouda’s decision “is yet another damning indictment of the Duterte government’s murderous policies that have killed – an continue to kill – thousands of Filipinos with impunity.”

Many of those killed in Duterte’s crackdown had been on a drug watch list compiled by authorities or had previously surrendered to police, while a significant number of children and teenagers were victims, Bensouda’s office said in a report in December.

In June 2020, the UN said at least 73 children had been killed in the drug war, with the youngest just five months old.

Duterte announced that the Philippines was withdrawing from the ICC in March 2018. The decision came into force a year later.

The court, however, still has jurisdiction over the alleged crimes that happened while the country was still a member of the court.

When he announced he was going to withdraw from the court, Duterte defended his drug crackdown, saying in a 15-page statement that it is “lawfully directed against drug lords and pushers who have for many years destroyed the present generation, especially the youth”.

Judges at the global court have 120 days to issue a decision on the prosecutor’s request.

Incoming ICC prosecutor Karim Khan will now oversee the Philippine files. Khan has previously visited the Philippines to look into the deadly war on drugs. 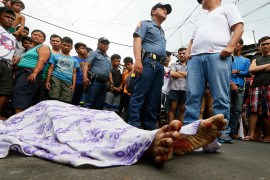 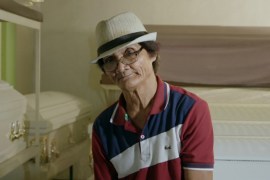 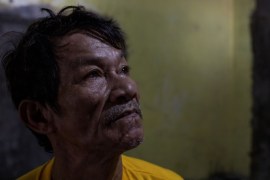