A man accused of running down a Muslim family in the Canadian city of London, Ontario, this month, killing four people including a teenage girl, now faces terrorism charges, authorities announced on Monday.

The London Police Service said in a statement that Nathaniel Veltman’s four counts of first-degree murder “constitute terrorism offences” and that federal and provincial prosecutors had agreed to begin terrorism proceedings.

Veltman is accused of deliberately hitting five members of the Afzaal family with a pick-up truck while they were out for an evening walk on June 6.

Salman Afzaal, 46, his 44-year-old wife Madiha Salman, their 15-year-old daughter Yumna and her 74-year-old grandmother, Talat Afzaal, were killed in the attack, while the couple’s nine-year-old son was seriously injured.

The 20-year-old, who made a brief in court on Monday via video, has yet to enter a plea.

Police have said Veltman attacked the family “because of their Islamic faith”.

The attack has shaken Muslim communities across Canada, which for years have called for action to address Islamophobia and bigotry, especially following a deadly mass shooting at a mosque in Quebec City in January 2017.

Saboor Khan, a friend of the family, told the Associated Press news agency that upgrading the charges against Veltman was “the right thing to do”.

“The family and the community has been terrorised and many of us are afraid to leave our homes,” Khan said.

The National Council of Canadian Muslims (NCCM), a national advocacy group, said on Monday that the terrorism charges were “an important development”, but would comment more later.

Canadian Deputy Prime Minister Chrystia Freeland also reacted to the new charges, saying: “It is really important for us to name it as an act of terror … and it is important for us to identify the terrible threat that white supremacism poses to Canada and to Canadians.”

A funeral for the Afzaal family drew hundreds of mourners to the Islamic Centre of Southwest Ontario over the weekend.

Raza Bashir Tarar, high commissioner for Pakistan to Canada, said during Saturday’s service that the entire nation of Pakistan – where the family was originally from – “stands shoulder-to-shoulder with you in this hour of grief, in this time when our hearts are bleeding because of the atrocity that has befallen this wonderful, marvellous family”.

Thousands of supporters also marched from the location where the family was killed to a mosque 7km (4.4 miles) away.

Still, many members of Canada’s Muslim community remain frightened. Selma Tobah, a 31-year-old graduate student who lives in London, told Al Jazeera last week that many community members feel as though “it could have been any one of us.”

Calls for concrete action to root out Islamophobia are growing, as well.

NCCM last week called on Prime Minister Justin Trudeau’s government to host a National Action Summit on Islamophobia “to chart a path forward for Canada in ending violence against Muslims”.

The country’s minister of diversity and inclusion and youth, Bardish Chagger, responded to that call on Friday, saying the government would be “hosting a series of summits including a National Summit on Islamophobia to coordinate further action”.

Veltman’s next court date is scheduled for June 21. 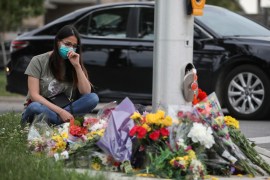 Canada anti-Muslim attack: ‘It could have been any one of us’

Prime Minister Justin Trudeau says killing of four members of a Muslim family in Ontario is a ‘terrorist attack’. 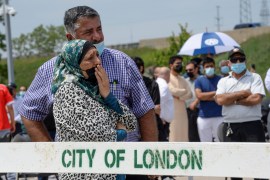 Grief, mourning at funeral for Muslim family killed in Canada 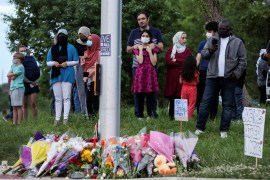 ‘Motivated by hate’: Muslim family run over in Canada

Police say driver ran over a family in Ontario ‘because they were Muslim’, killing four people including a teenage girl.