Right-wing protesters are planning to hit the streets of Madrid to denounce a controversial Spanish government proposal to offer pardons to the jailed Catalan separatists behind the failed 2017 independence bid.

The mass protest, which is scheduled to start at midday (10:00 GMT) on Sunday, will up pressure on Prime Minister Pedro Sanchez who has called for understanding over the planned gesture that has dominated political debate for weeks and reactivated the controversy over Catalan separatism.

“I understand there may be people who could have objections over this decision that the government may take, given what happened in 2017,” he said on Wednesday during an official visit to Argentina.

“But I ask for your trust. I ask for understanding and for magnanimity because the challenge facing all of us – to promote coexistence – is worth it.”

Although Sanchez’s left-wing government has not said anything concrete on the matter, all indications suggest the pardons will be granted before the summer break.

But the proposal has generated a huge backlash from the right-wing opposition, which has accused the minority government of caving in to pressure from separatist parties, on whose support it partially depends.

“Sanchez is planning pardons to legitimise an ongoing crime … (in) a historic error that won’t solve anything, only to keep his government from going under,” said opposition leader Pablo Casado, head of the right-wing Popular Party (PP).

Spain’s Supreme Court has also opposed the move to offer clemency to those convicted over their role in the referendum and a short-lived declaration of independence, saying it saw “no evidence or indication of remorse” from the prisoners to justify any such pardon.

The Supreme Court convicted 12 Catalan separatists for their role in the crisis, with nine of them handed jail terms of between nine and 13 years in October 2019.

The prisoner serving the longest sentence of 13 years is Oriol Junqueras, head of the ERC (the Republican Left of Catalonia) which is a key parliamentary ally for Sanchez’s government.

In a letter published on Monday, Junqueras signalled support for the idea of a pardon from Madrid after previously rejecting the idea out of hand, also admitting that the separatists had made errors back in 2017.

“We must be mindful of the fact that our response was also not seen as fully legitimate by part of society,” he wrote.

He also expressed support for a Scottish-style referendum carried out in agreement with Spain – an option which Madrid is not willing to discuss.

“All separatist leaders are aware this will be a very costly decision for the socialists because most Catalans are in favour of the pardons but most Spaniards are against,” said Ana Sofia Cardenal, a political scientist at Catalonia’s Open University.

But hardline separatists, among them the JxCat party of ex-Catalan leader Carles Puigdemont who fled Spain to avoid prosecution after the 2017 independence bid, have not given up on unilateralism, and have repeatedly demanded an amnesty for the prisoners – which is not on the table. 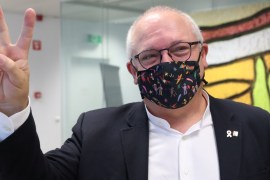 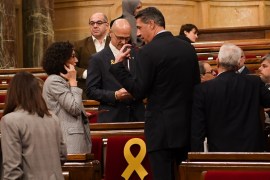 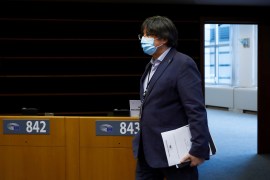 The move could see Spain restart efforts to have separatist leader extradited to face trial.