The leaders of the G7 countries ended a three-day summit with a diverse set of initiatives, including a pledge to vaccinate poorer countries against the coronavirus, a promise to make large corporations pay their fair share of taxes and a plan to tackle climate change with a blend of technology and money.

In a joint communique delivered on Sunday at the end of the meeting in the British southwestern city of Cornwall, the leaders of the G7 countries – Canada, France, Germany, Italy, Japan, the United Kingdom and the United States – sought to show that international cooperation is back after the upheavals caused by the pandemic and the unpredictability of former US President Donald Trump.

Here is a round-up of the G7’s main initiatives:

The G7 made ambitious promises, such as sharing vaccine doses with less well-off nations that urgently need them. UK Prime Minister Boris Johnson, who held a press conference at the conclusion of the summit, said the group would pledge at least 1 billion doses, with half of that coming from the US and 100 million from Britain.

Many of the promised doses will flow through COVAX, a global vaccine buying system backed by the World Health Organization and Gavi, the vaccine alliance.

The pledge does not represent entirely new resources, and the donation is far short of the number of shots needed to fully vaccinate poorer nations. Moreover, the plan does not address distribution gaps that could make it difficult to deliver doses.

WHO chief Tedros Adhanom Ghebreyesus and other public health officials commended the vaccine pledge but said it is not enough. To truly end the pandemic, he said, 11 billion doses are needed to vaccinate at least 70 percent of the world’s population by mid-2022.

“We need more and we need them faster,” Tedros said.

The G7 also urged China to cooperate with the UN health agency on a “transparent” second-phase probe into the origins of the global coronavirus pandemic.

“We … call for a timely, transparent, expert-led, and science-based WHO-convened Phase 2 COVID-19 Origins study including, as recommended by the experts’ report, in China,” the group said in their final statement.

Ramping up action against climate change

Climate change was a key focus of the leaders’ final day of talks with the G7 countries formally backing the ramp-up of collective action to tackle the environmental crisis.

“We commit to … halving our collective emissions over the two decades to 2030, increasing and improving climate finance to 2025 and to conserve or protect at least 30 percent of our land and oceans by 2030,” read the joint communique.

The seven leaders also agreed to raise their contributions to meet an overdue spending pledge of $100bn a year to help poorer countries cut carbon emissions and cope with global warming, but campaigners said firm cash promises were missing.

Alongside plans billed as helping speed infrastructure funding in developing countries and a shift to renewable and sustainable technology, the world’s seven largest advanced economies again pledged to meet the climate finance target.

However, climate groups said such promises lacked detail. A spokesman for British Prime Minister Boris Johnson said individual nations were expected to set out the size of the increases “in due course”.

Max Lawson, Head of Inequality Policy at Oxfam, said it was “unacceptable that most of the G7 missed the opportunity to make new pledges of climate finance.”

“Developing countries were looking for progress on this front ahead of landmark climate talks in Glasgow. Vague promises of new financing for green development projects should not distract from this goal,” he said.

The decision had been widely anticipated after finance ministers earlier this month embraced placing a global minimum tax of at least 15 percent on large multinational companies, in an attempt to stop corporations from using tax havens to avoid taxes and thus robbing some countries of much-needed revenue. The proposal will now go to G20 nations meeting in Italy next month.

The wealthy nations demanded Russia take action against those conducting cyberattacks and using ransomware, and called for an investigation into the use of chemical weapons on Russian soil.

“We call on Russia to urgently investigate and credibly explain the use of a chemical weapon on its soil, to end its systematic crackdown on independent civil society and media, and to identify, disrupt, and hold to account those within its borders who conduct ransomware attacks, abuse virtual currency to launder ransoms, and other cybercrimes,” a communique issued after the conclusion of the leaders’ summit in Britain said.

Immediate halt to the war in Ethiopia

The G7 also called for an immediate end to hostilities in Ethiopia’s Tigray region.

“We are deeply concerned by the ongoing conflict in Ethiopia’s Tigray region and reports of an unfolding major humanitarian tragedy,” said the communique. “We call for an immediate cessation of hostilities, unimpeded humanitarian access to all areas and the immediate withdrawal of Eritrean forces.”

Fighting broke out in the region in November between government troops and the region’s former ruling party, the Tigray People’s Liberation Front (TPLF). Troops from neighbouring Eritrea also entered the conflict to support the Ethiopian government.

The leaders of the wealthy democracies say they will work together to challenge China’s “non-market economic practices” and to call on Beijing to respect human rights in Xinjiang and Hong Kong.

US President Joe Biden had wanted to persuade fellow democratic leaders to present a more unified front to compete economically with Beijing and strongly call out China’s “nonmarket policies and human rights abuses”.

The G7 communique said: “With regard to China, and competition in the global economy, we will continue to consult on collective approaches to challenging non-market policies and practices which undermine the fair and transparent operation of the global economy.”

The leaders also said they will promote their values by calling on China to respect human rights and fundamental freedoms in Xinjiang, where Beijing is accused of committing serious human rights abuses against the Uighur minority, and in the semi-autonomous city of Hong Kong. 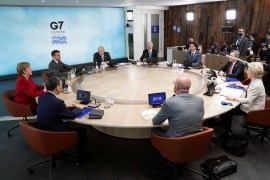 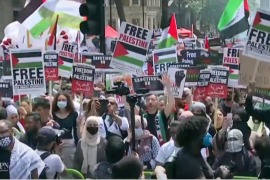 Protesters march to Downing Street and call on G7 leaders to end their support to Israel following Gaza assault. 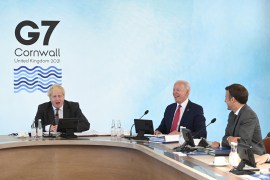 The ‘Build Back Better World’ project is aimed squarely at competing with China’s Belt and Road Initiative.