Police in the US city of Austin, Texas, say they are searching for two suspects after a shooting early on Saturday injured 14 people, including two critically.

Gunfire erupted just before 1:25am (06:25 GMT) on Saturday along Sixth Street, a popular area filled with bars and restaurants.

The street was barricaded to keep out vehicles at the time of the shooting, Austin Police Department Interim Chief Joseph Chacon said.

Authorities initially said 13 people had been wounded in the incident, which comes amid a recent uptick in gun violence across the United States, but they later increased the number to 14.

Chacon said police are searching for two male suspects, but he declined to disclose details such as whether both fired shots, saying the investigation was ongoing and the department was working to take them into custody.

He said investigators believe it started as a dispute between two parties.

“Most of the victims were innocent bystanders, but we’re still sorting out all of the victims to see what their involvement is in this case,” Chacon said.

FINAL Active Attack: Updated patient count is 13, the 13th patient was transported by private vehicle. Further information requests should be directed to @Austin_Police. #ATCEMS personnel are clearing the scene shortly. Continue to avoid the 6th St area. No other info available.

Earlier, Chacon said officers responded quickly to the scene and were able to “immediately begin life-saving measures for many of these patients, including applications of tourniquets; applications of chest seals”.

Chacon also said some officers transported patients to hospitals in their police cruisers due to the nature of the scene, where it was hard to contain the crowd and get ambulances to those who were injured.

Investigators were reviewing surveillance video and other evidence from the area, Chacon said.

One witness, Matt Perlstein, told KXAN-TV that he was waiting with a friend to enter a bar when the shooting began.

“Everything was totally fine,” Perlstein said, then gunfire erupted. “We just heard like … a bunch of gunshots going off. Everyone got on the ground. We couldn’t even comprehend what was going on at the time.”

In a statement on Saturday, Texas Governor Greg Abbott said the Texas Department of Public Safety was working with Austin police “to respond to this shooting and ensure that the perpetrators are captured and punished to the fullest extent of the law”.

The incident is the latest in a recent string of mass shootings across the country.

US President Joe Biden has called gun violence “a national embarrassment” and urged stricter gun control laws – though such efforts are staunchly opposed by many Republican legislators and gun lobby groups.

In recent years, Democrats have called for universal background checks, which are broadly popular among Americans, as well as a ban on military-style “assault” weapons, but conservatives remain steadfastly against strict, new gun control measures.

Biden in April announced a series of executive actions to try to stem gun violence.

The Gun Violence Archive, a US non-profit, says 610 mass shootings were reported in 2020, up from 417 the previous year and 336 in 2018. The group defines a mass shooting as any incident in which four or more people are shot or killed, not including the attacker. 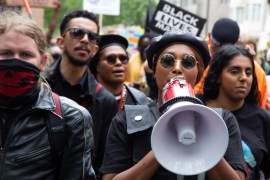 UK police say Sasha Johnson did not appear to have been targeted, but she had received death threats in the past. 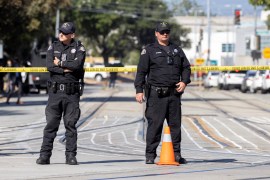 The alleged attacker, an employee of the California city’s transit service, killed at least eight at a local rail yard. 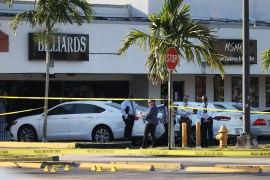