Gunmen have shot Katumba Wamala, Uganda’s minister of works and transport, in what police described as a “targeted drive-by shooting” which left the former top general’s daughter and driver dead.

Four attackers riding on two motorcycles with concealed number plates followed Wamala from his home in the capital, Kampala, for 4km (2.5 miles) before they sprayed his vehicle with bullets shortly before 9am (06:00 GMT) on Tuesday, a police statement said.

“This is the first major shooting since 2019 and we strongly believe it was a targeted and not random incident.”

The style of the attack echoed that of several others over the years in which many high-profile Ugandans have been killed, with the perpetrators never brought to justice.

The general’s daughter, Brenda Nantogo, and driver Haruna Kayondo were killed in the attack, while another bodyguard survived. Wamala, who once served as army chief, was wounded in an arm.

“The exact motivation towards the targeted shooting is not yet established. We consider such attacks as a form of organised crime, with a potential of extremism, aimed at undermining the prevailing stability,” Lokech said.

White-clad forensic police swarmed the scene of the shooting, where bullet holes riddled the rear and driver’s side of Wamala’s car – an official army vehicle easily identified by its distinctive military green number plates.

Wamala’s wife Catherine and a son also visited the scene.

In a video addressed to his children, Wamala spoke out about the attempt on his life.

“I’ve survived. We have lost Brenda. That’s God’s plan. I love you guys. Please pray for mummy. Mummy’s in a terrible, terrible state, please pray for her,” he said, his voice shaking with emotion.

The pigs who do not value life shot at Gen. Katumba killed his daughter and driver and injured him. Condolences on the loss of the two Ugandans. I talked to Gen. Katumba twice on the phone. He is being well-managed.

In a statement posted on Twitter, Uganda’s President Yoweri Museveni slammed the attackers as “pigs who do not value life”.

“I talked to Gen. Katumba twice on the phone. He is being well-managed,” he said, adding: “We already have clues to those killers.”

Museveni said one of the bodyguards fired a warning shot which saved the general’s life, adding they should have “shot to kill”.

“We could be having a dead terrorist instead of scaring away the terrorists.”

Tuesday’s shooting was the latest in a series of attempted killings of high-profile targets by motorcycle-riding assassins in Uganda’s capital.

In June 2018, Ibrahim Abiriga, a leading politician from Museveni’s National Resistance Movement party, was killed alongside his bodyguard in similar circumstances.

In March 2017, witnesses described how Uganda police spokesman Andrew Kaweesi was killed in a hail of bullets, also by four masked assailants riding two motorcycles and near the site of the latest attack on Wamala.

And in March 2015, Joan Kagezi, a prosecutor in charge of investigating an attack in Kampala in 2010, was shot dead by men on motorbikes as she returned home.

No one has been convicted of any of those killings.

Museveni said a new system of “digital beacons” on all vehicles and motorcycles would stop them from being used in crimes. 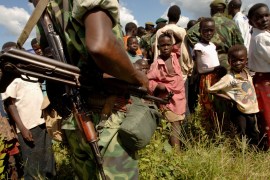 UN court is holding hearings this week in long-running dispute between DR Congo and Uganda over 1998-2003 damages. 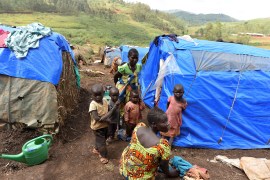 Uganda says the more than $13bn in reparations sought by DRC over Ituri conflict could ruin its economy. 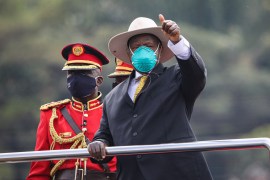 The ceremony comes following the bloodiest pre-election crackdown in years and widespread allegations of irregularities.