Colombia will keep its border with Venezuela shut until September 1, scrapping earlier plans to reopen on June 1, the nation’s Foreign Ministry has said in a decree.

According to the document dated May 31, humanitarian situations, the transport of cargo and merchandise, as well as the departure of foreign nationals will be exempt from the closure.

Those exempt, according to the document, must comply with the country’s COVID-19 pandemic health measures.

The Colombian government ordered the closure of all land and river border crossings into the country back in March last year, in order to mitigate the spread of the pandemic.

Violence on the border

But in recent months, the border has also been the site of violent clashes between the Venezuelan army and armed groups operating in Colombia.

Late on Monday, the Colombian Defence Ministry said Venezuela released eight soldiers who were captured in combat with Colombian armed groups in the border state of Apure.

The troops were taken in May amid fighting along the Colombian border that has killed at least a dozen soldiers since March and spurred thousands of civilians to flee to Colombia.

“Via the operation ‘Centenary Eagle,’ the eight military professionals kidnapped by irregular Colombian armed groups have been rescued,” the ministry said in a post on Twitter, adding it was still “in search of” two other soldiers.

Venezuelan President Nicolas Maduro has offered only vague statements about the identity of the combatants, but opposition leaders and rights groups say they are former members of Colombia’s FARC rebel group.

Colombian government leaders say Maduro has granted safe harbour to former FARC factions that disavowed a 2016 peace deal, and that the Venezuelan military is now being drawn into conflicts between rival illegal groups.

The Chamber of Commerce of the city of Cucuta, a Colombian city near the Venezuelan border, which relies on cross-border commerce criticised the decision to keep the border shut. In a statement, the group said the move would encourage irregular border crossings and would cause further economic losses to both countries.

“Clearly, with this, we lost the opportunity to reactivate the economy, [and] control COVID-19 along the binational bridges,” Carlos Luna, president of the Chamber of Commerce’s joint committee told local media.

Prior to the pandemic, hundreds of Venezuelans used to cross into Colombia daily to buy food, medicine and supplies that are lacking in Venezuela, a nation suffering from poverty and hyperinflation.

Colombia hosts at least 1.7 million Venezuelan refugees, according to the UN refugee agency. 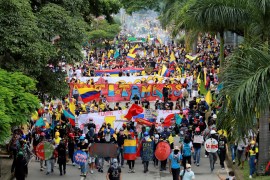 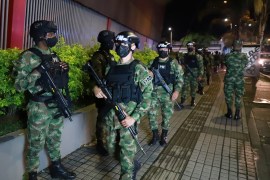 Colombian soldiers deployed in Cali after deadly day of protests 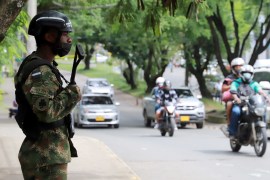 The statement pointed to reports that 14 people have died since Friday amid huge anti-government protests in Cali.