A popular mixed martial arts fighter who joined anti-coup protests in Myanmar has been wounded by a homemade bomb and later arrested following an alleged blast – among many others in at least three cities – as the military government struggles to assert control of the country amid a mounting death toll and defiant protests.

Anti-coup protests were held on Friday across the country, including the city of Magway west of the capital, Naypyidaw. A pre-dawn strike was also held in the Natmouk district of Magway, with protesters carrying torches and the red banner of the National League of Democracy party of Aung San Suu Kyi.

Young protesters also held “lightning strike” marches against the military in the Thamine and Thaketa districts of Yangon, while there have also been reports on social media of security forces carrying out a raid early on Friday in Yangon’s Hledan area. Authorities also detained several people, despite not having arrest warrants.

The military’s Myawaddy TV reported on Thursday that the mixed martial arts fighter, Phoe Thaw, 36, was arrested in hospital while receiving treatment for leg wounds sustained while allegedly testing a homemade bomb late on Wednesday at a Yangon gym.

Security forces claimed to have found bomb-making materials, arms and ammunition when they searched the gym. He was among four people detained and accused of colluding to commit violent acts, it said.

Phoe Thaw is well-known in Myanmar and was caught on camera during the protests holding a sign that challenged coup leader, Min Aung Hlaing, to a cage fight.

Images on Myawaddy TV on Thursday showed him on a stretcher, his legs covered in wounds and burns.

A former colleague, who spoke to the Reuters news agency on the condition of anonymity, said the homemade bomb had been left at the gym car park by a policeman posing as a civilian.

Small blasts are becoming more frequent in towns and cities in Myanmar, some at government or military buildings, which the coup leaders say are proof of a violent rebellion by supporters of Aung San Suu Kyi’s overthrown government.

A unity government comprised of former politicians, pro-democracy groups and ethnic minority armies says the explosions are being orchestrated by the military, which is seeking to cling to power by eradicating its enemies.

Following earlier explosions on Wednesday, which hit a bus station in Mandalay as well as at a bank and a military-owned telecoms company in Naypyidaw, Min Aung Hlaing called for “effective action” against the perpetrators.

“They are destroying the country,” MRTV quoted him saying.

The station also reported that arrest warrants were being sought for 40 medical workers and teachers accused of promoting a civil disobedience campaign.

The incident comes days after the military reported five people, including a politician in Aung San Suu Kyi’s party, were killed in an explosion in the Bago region, with bomb-making materials recovered from the scene.

Media outlets Irrawaddy and the Democratic Voice of Burma on Thursday said a local government administrator was knifed to death in Mandalay, the second such killing this week, after the fatal stabbing of a military-appointed official in Yangon.

Myanmar has been in chaos since a February 1 coup, which ended 10 years of economic reform and tentative steps towards democracy initiated by the military after 49 years of rule in the impoverished but resource-rich country.

Months of protests and strikes have crippled the economy, disrupting banking, business and much of the bureaucracy, prompting concern that Myanmar is edging closer to becoming a failed state.

UPDATE: Myanmar army says Pho Thaw, who was seriously injured in a blast in a gym in Bahan, was making bombs in the gym when the blast occurred

The human rights monitor, Assistance Association for Political Prisoners reported late on Thursday that the death toll from the military crackdown since the beginning of the coup has already reached 772, while 3,738 are currently detained or have been sentenced.

Al Jazeera could not independently verify the numbers due to reporting restrictions.

In another development, more youths took to social media on Thursday to declare their intent to train to fight in the unity government’s newly formed “defence force”, threatening to attack the well-equipped military if more civilians are killed. 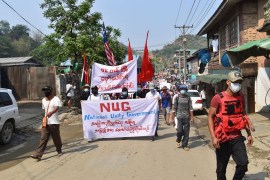 Defence force aimed to protect civilians from security forces and could be a precursor to establishing a federal army. 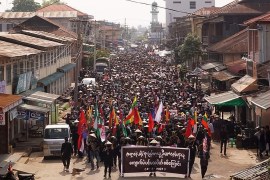 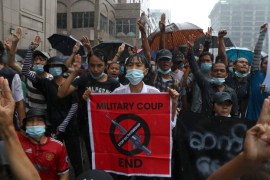 UN calls for restoration of democracy in Myanmar, end to violence