More than 170 Palestinians have been injured after Israeli police stormed the Al-Aqsa Mosque and dispersed worshippers elsewhere in occupied East Jerusalem, as weeks-long tensions between Israel and the Palestinians over Jerusalem soared again.

Earlier in the day, tens of thousands of Palestinian worshippers packed into the mosque on the final Friday of Ramadan and many stayed on to protest in support of Palestinians facing eviction from their homes on Israeli-occupied land claimed by Jewish settlers.

During the past week, residents of Sheikh Jarrah, as well as Palestinian and international solidarity activists, have attended nightly vigils to support the Palestinian families under threat of forced displacement.

Israeli border police and forces have attacked the sit-ins using skunk water, tear gas, rubber-coated bullets and shock grenades over the past few days. Dozens of Palestinians have been arrested.

US ‘extremely concerned’ about violence in Jerusalem

The US State Department said it is “extremely concerned” about the violence in Jerusalem and called on Israeli and Palestinian officials “to act decisively” to deescalate tensions.

“There is no excuse for violence, but such bloodshed is especially disturbing now, coming as it does on the last days of Ramadan. This includes Friday’s attack on Israeli soldiers and reciprocal ‘price tag’ attacks on Palestinians in the West Bank, which we condemn in no uncertain terms.”

Price added that the US is also “deeply concerned” about the potential eviction of Palestinian families in Sheikh Jarrah and Silwan neighbourhoods of Jerusalem.

We are extremely concerned about ongoing confrontations in Jerusalem, including on the Haram al-Sharif/Temple Mount and in Sheikh Jarrah. We call on Israeli and Palestinian officials to act decisively to deescalate tensions & bring a halt to the violence. https://t.co/WV5adgCfmS

The United Nations has urged Israel to call off any forced evictions in Israeli-annexed east Jerusalem, warning that its actions could amount to “war crimes”.

“We wish to emphasise that East Jerusalem remains part of the occupied Palestinian territory, in which international humanitarian law applies,” Colville said.

“The occupying power… cannot confiscate private property in occupied territory,” he said, adding that transferring civilian populations into occupied territory was illegal under international law and “may amount to war crimes.”

At least 184 injured in Jerusalem clashes

The Reuters news service reports that 178 Palestinians and six police officers have been injured after Israeli police stormed the Al-Aqsa Mosque compound and dispersed worshippers in East Jerusalem.

The Palestinian Red Crescent ambulance service said 88 of the Palestinians injured were taken to hospital after being hit with rubber-coated metal bullets.

The Palestinian Red Crescent emergency service said they have now recorded 163 people injured after Israeli police stormed the Al-Aqsa Mosque and dispersed worshippers elsewhere in Jerusalem, including 83 who were hospitalised.

The Red Crescent also said it had established a field hospital in Jerusalem to deal with minor and moderate injuries to reduce the pressure on hospitals.

PalestineRCS established a field hospital in Jerusalem to deal with minor and moderate injuries to reduce pressure on hospitals’ ER. Tens of injured Palestinians are being referred to hospitals for treatment. pic.twitter.com/YRNJOjaMeo

Hours after clashes first broke out, large reinforcements from the Israeli police forces continued to stream into the Al-Aqsa Mosque compound.

Palestinian activists reported that Israeli forces were continuing to target worshippers in the compound as a large numbers of Palestinians held prayers inside the mosque.

Calls for Israeli police to withdraw

Appealing for calm on the compound through the mosque’s loudspeakers, Sheikh Omar al-Kiswani, the director of Al-Aqsa Mosque, called on Israeli police to halt their attacks and withdraw from the mosque courtyard.

“Police must immediately stop firing stun grenades at worshippers, and the youth must calm down and be quiet!”

“The downward and declining movement of the Zionist regime has begun and will not stop,” said Khamenei as Iran marked its own al-Quds, or Jerusalem, Day.

Ismail Haniya, chief of the Hamas political bureau, has warned of “consequences for the aggression” at Al-Aqsa Mosque.

Haniya reportedly contacted a number of officials in the region calling on their support to stand up to the attacks on Palestinian worshippers in Al-Aqsa, reported Palestinian media.

Mahmoud al-Zahhar, another member of the Hamas political bureau, condemned Arabs leaders for remaining “silent as they watch the attack on Al-Aqsa Mosque”.

He said the only solution to the situation in Jerusalem would be through “armed resistance”.

Situation expected to ‘flare up’ in next few days

Reporting from Ramallah, Al Jazeera’s Nida Ibrahim said that the situation likely to flare up again over coming days.

“We know that two Palestinians have been seriously wounded at least. The rest are still going to hospitals.

“Also, we’ve heard from our sources in Jerusalem that there are Palestinians who were leaving the Al-Aqsa compound that are getting beaten up by the Israeli police,” she said.

“We are expecting this situation to flare up even further as on Monday, there is what Israelis call the Jerusalem Day. It coincides with Laylat-ul-Qadar, which is the holiest nights during Ramadan,” added Ibrahim.

Dozens remained near the entrance of Sheikh Jarrah neighbourhood where Israeli police had erected barricades to stop them from entering the residential area.

Some chanted a refrain common at Jerusalem protests: “With our soul, with our blood, we will redeem you, oh Aqsa.”

Israeli police attacked worshippers who were praying in the Masjid al-Qiblatain inside Al-Aqsa with stun grenades and rubber bullets.

Meanwhile, clashes took place between Israeli security forces and Palestinians trying to enter Al-Aqsa through the Bab Al-Silsila, one of the gates to the mosque.

Israeli police also attacked young Palestinians in front of the Damascus and Es-Sahire gates of the Old City.

“Strongly condemning the attack this evening on al-Aqsa Mosque, our first Qibla. It is inhumane for Israel to target innocents praying during Holy Ramadan,” Foreign Minister Mevlut Cavusoglu said on Twitter, referring to the Muslim holy month.

“Will always stand by the just cause of the people of #Palestine,” Cavusoglu added, wishing a speedy recovery to those injured in the Israeli raid.

Strongly condemning the attack this evening on al-Aqsa Mosque,our first Qibla. It is inhumane for Israel to target innocents praying during Holy Ramadan. Wishing speedy recovery to our injured brothers and sisters. Will always stand by the just cause of the people of #Palestine.

Palestinian president Mahmud Abbas said in a televised statement that the Israeli government is fully responsible for the recent incidents in Jerusalem, as well as any repercussions that result from the continuing escalation.

He also voiced “full support for our heroes in Aqsa”.

He underlined that the “brutality and terrorism” of the Israeli settlers in East Jerusalem would only make Palestinians more attached to their national right.

Turkey called on Israel to abandon its policy of building illegal settlements in East Jerusalem.

The Turkish official said Israel maintained its “occupation policy” in East Jerusalem and the West Bank without a pause, and it was taking new steps to expand illegal settlements or transfer Palestinian houses to illegal settlers, which could pave the way for further destabilisation in the future.

US: ‘Critical’ to de-escalate Jerusalem tensions

The United States called for de-escalation in occupied East Jerusalem, and warned against carrying out a threatened eviction of Palestinian families.

She said it was “critical” to “de-escalate tensions” and avoid any unilateral steps that could worsen the situation – such as “evictions, settlement activity and demolition”.

At least 53 Palestinians were injured and 23 were hospitalised in confrontations with Israeli police at the Al-Aqsa Mosque in occupied East Jerusalem’s Old City, according to the Palestinian Red Crescent rescue service.

It said most were wounded in the face and eyes by rubber-coated bullets and shrapnel from stun grenades fired by Israeli police.

Right now—the last Friday of Ramadan, the most sacred time of year for Muslims—Israeli forces are shooting rubber bullets & stun grenades at Palestinians inside Al Aqsa mosque in occupied Jerusalem, the third holiest site in Islam. There is no escaping the occupation’s violence. pic.twitter.com/Cixd9GSBfH

Palestinian families in Sheikh Jarrah say they are ‘terrified’

“What if they massacre us?” he asked. “Our families are terrified.”

Right now in Sheikh Jarrah: settlers are walking around armed while no Palestinians are allowed in. LOOK AND LOOK AGAIN.

What if they massacre us?! Our families are terrified. Who’s to save us?! pic.twitter.com/tic35KCFfN

Israeli police blocked off the entrances of the Sheikh Jarrah neighbourhood to hundreds of Palestinians and solidarity activists trying to enter the area, said activists.

Protesters who were prevented from entering Sheikh Jarrah held a group iftar, the evening meal which breaks the daily fast during Ramadan, and held a vigil at the police barricades.

The spokesman for the United Nations High Commissioner for Human Rights said the evictions, “if ordered and implemented, would violate Israel’s obligations under international law” on East Jerusalem territory it captured and occupied in the 1967 Middle East war.

“We call on Israel to immediately halt all forced evictions, including those in Sheikh Jarrah, and to cease any activity that would further contribute to a coercive environment and lead to a risk of forcible transfer,” spokesman Rupert Colville said.

Tens of thousands of Palestinian worshippers had earlier packed into the mosque on the final Friday of Ramadan and many stayed on to protest in support of Palestinians facing eviction from their homes on Israeli-occupied land claimed by Jewish settlers.

However, thousands of Palestinians from the occupied West Bank were blocked from reaching the Al-Aqsa Mosque as Israeli forces set up several roadblocks and checkpoints along the way to the holy site.

Continuing tensions in the city at the core of the Israeli-Palestinian conflict were front and centre in the Friday sermon given by Sheikh Tayseer Abu Sunainah. 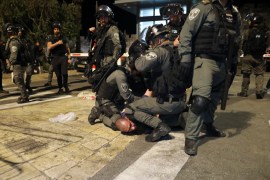 Tens of thousands of Palestinian worshippers earlier packed Al-Aqsa mosque on the final Friday of Ramadan. 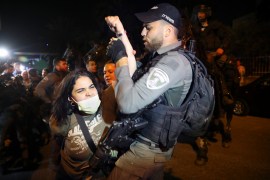