The United Kingdom and France deployed maritime patrol vessels to the waters off the Channel island of Jersey on Thursday as a dispute over post-Brexit fishing rights escalated.

The moves came after French trawler crews angry at restrictions placed on their access to UK fishing grounds after the latter’s departure from the European Union sailed to Jersey in a flotilla to stage a protest. They had arrived at dawn, with some crew holding red flares aloft.

At least one of the fleet of about 50 fishing boats entered Jersey’s main port of St Helier during the protest and briefly blocked the Commodore Goodwill, a cargo vessel and ferry that connects the Channel islands to the UK mainland.

The UK said it had sent two naval gunboats to “monitor the situation” in the waters surrounding the island in response.

British Prime Minister Boris Johnson said the vessels would remain off Jersey, which sits 14 miles (23 kilometres) off the northern French coast and 85 miles (140 km) south of the UK mainland’s shores, as a precautionary measure.

France reacted in turn following the UK’s move, dispatching two of its own maritime patrol boats to the area, hours before the flotilla of fishing boats left the shores of Jersey in the early afternoon.

An official from the French presidency said the deployment of patrol vessels from both France and the UK was aimed at preventing clashes between trawlers on opposing sides of the row. 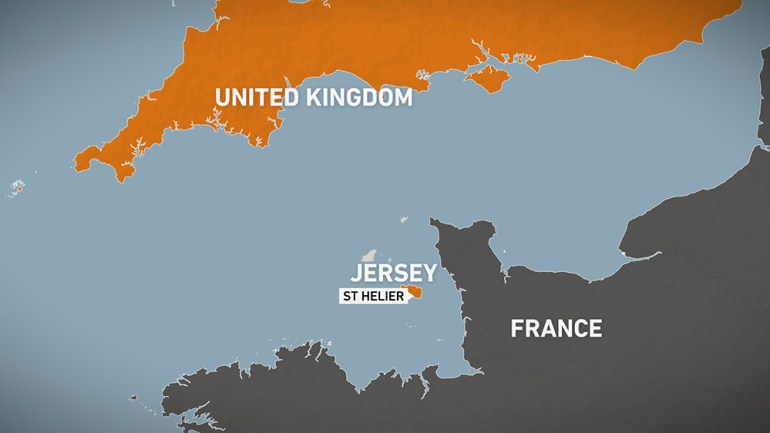 It was at least 20 km away from the two British naval vessels, the HMS Severn and HMS Tamar, which were on the south-western side of the island.

Al Jazeera’s Natacha Butler, reporting from onboard a French fishing vessel at the scene early on Thursday morning, said disagreements between the UK and France over post-Brexit fishing rights that have been rumbling for weeks were now “escalating”, with both sides “upping the rhetoric”.

France has warned it could cut off electricity to Jersey amid the ongoing row, a threat the UK has branded “unacceptable”.

The European Commission, the EU’s executive arm, called for calm on Thursday over the dispute but also accused the UK of not respecting the terms of the post-Brexit trade deal agreed to by the two sides.

Thursday’s stand-off came after Jersey’s government said the island had issued new fishing permits, which included new conditions for license-holders, in accordance with post-Brexit trade terms between the UK and EU.

Under the trade deal brokered between London and Brussels, Jersey must allow European vessels into its waters.

But the permits issued by the self-governing British Crown Dependency have angered French trawler crews and the French government, who said the terms had been imposed unilaterally and without discussion, and that they placed unfair restrictions on French fishing vessels, including the time they could spend in Jersey’s waters.

Island officials have defended their approach, saying the Brexit trade deal stipulates licenses take into account how much time a vessel spent in Jersey’s waters before the UK’s departure from the EU.

The European Commission has argued that until further justifications have been provided by the UK, Jersey should not be attaching new conditions to the issuance of licenses.

In an apparent bid to defuse the situation, Jersey government officials held talks with representatives of the protesters on Thursday.

But the discussions were not positive, said Hugo Lehuby, a spokesman for the Normandy Regional Fisheries Committee.

“We’re getting deeper into deadlock,” Lehuby told Reuters. “Either this gets resolved, or retaliatory measures are taken.”

Summing up the depth of feeling of the protesters, Al Jazeera’s Butler said they were “angry, frustrated and upset”, adding they felt their “livelihoods” were at stake.

“The French fishing community here say they will not be able to survive unless they regain access to these waters,” she said.