Qatar has ordered the arrest of Finance Minister Ali Shareef al-Emadi as part of an investigation into alleged misuse of public funds and abuse of power, and relieved him of his ministerial responsibilities.

Qatar News Agency (QNA) reported on Thursday that the attorney general had ordered the arrest after the review of documents and reports regarding crimes related to the public sector.

An “expanded” investigation was under way, it added.

“The attorney general has ordered the arrest of Minister of Finance Ali Sharif al-Emadi, and his questioning about matters raised in the reports regarding crimes pertaining to public office, such as damage to public funds, exploiting one’s post, and abuse of power,” QNA said.

Qatar’s Emir Sheikh Tamim bin Hamad Al Thani issued a decree relieving Al Emadi from his responsibilities as finance minister, according to a statement from the emir’s office later on Thursday.

The Emir also announced the appointment of Ali bin Ahmed al-Kuwari, Qatar’s minister of commerce and industry, to take up the responsibilities of finance minister in addition to the duties of his current role.

The decree comes into immediate effect from the date it was issued and will be published in the official gazette, said the statement.

Al Emadi, who oversaw the growth of Qatar National Bank, has served as finance minister since 2013.

He sits on the board of Qatar’s powerful $300bn sovereign wealth fund, the Qatar Investment Authority.

Qatari Foreign Minister Sheikh Mohammed bin Abdulrahman bin Jassim Al Thani told Reuters news agency that the probe was related to al-Emadi’s capacity as finance minister, and not to his posts at either the sovereign fund or the bank.

“There are no allegations related to his roles in any other entities. We are confident that our companies and entities are running the highest levels of corporate governance and we are conducting regular reviews and audits for the governance of our companies,” Sheikh Mohammed said.

“Business is continuing as usual in our companies and our sovereign wealth fund,” he added. He declined to provide further details of what he described as an ongoing investigation.

Al-Emadi steered Qatar’s economic policies during the 2014-15 oil price crash that prompted the tiny nation – as well as other Gulf countries – to accelerate plans to diversify the economy.

Qatar, a leading producer of liquefied natural gas, saw its economy shrink by 3.7 percent last year due to the coronavirus crisis and lower global energy demand.

However, the contraction was less than expected and was the smallest in the Gulf region, International Monetary Fund data showed.

Al-Emadi was named 2020’s best minister in the region by The Banker, an international financial magazine that organises an annual celebration of finance ministers. As Chairman of the Board at Qatar National Bank, he helped evolve the firm into the biggest lender in the Middle East.

Qatar, which will host the football World Cup next year, has invested heavily in infrastructure over the past few years in the run-up to the event, which means spending on big projects is set to decrease this year, the finance ministry has said.

Real gross domestic product is expected to grow 2.2 percent this year thanks to the rollout of vaccines, a gradual easing of coronavirus-related restrictions and an increase in oil demand and prices. 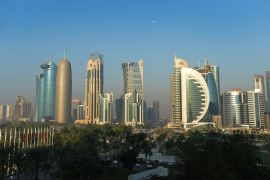 Qatar said it could allow foreign investors to fully own listed firms, which could trigger nearly $1.5bn in inflows.