Beirut, Lebanon – French Foreign Minister Jean-Yves Le Drian is in Beirut for talks with Lebanese leaders in an attempt to end months of political paralysis that has stalled the formation of a new government in the crisis-hit country.

Le Drian met President Michel Aoun at Baabda Palace on Thursday morning for about 30 minutes during which they discussed developments related to the government formation process, according to a presidential statement.

Aoun asserted it was his constitutional duty to “maintain sectarian and political balance in the government formation process”. He also assured the French foreign minister Lebanon was taking the reforms promised to France in September last year and asked for assistance in an investigation into looted funds transferred abroad.

In a Twitter post on Wednesday evening, Le Drian said he was planning to send a “message of great firmness to political leaders” during the talks.

“Firmness in the face of those hindering the formation of a government,” he said. “We have taken national action, and this is just the start.”

Lebanon has been functioning with a limited caretaker government since Prime Minister Hasan Diab resigned on August 10, days after a massive explosion at the Beirut port killed hundreds and wrecked much of the capital. The country continues to reel from a crippling economic crisis that has rendered more than half its population into poverty.

Former Prime Minister Saad Hariri was tasked in October with forming a new government but has been at odds with President Aoun over ministerial positions and the size of the upcoming government.

Not clear if France can succeed in its latest attempt to bring about a deal on a cabinet – many believe a deal in #Lebanon linked to: US-Iran talks in Vienna, Saudi-Iran talks in Baghdad and reported Saudi-Syria talks in Damascus https://t.co/8aLfGvdCHg

Le Drian’s visit is one of several from French officials following the Beirut port explosion, including President Emmanuel Macron who has been urging Lebanese officials to form a government that will enact reforms and unlock international development aid.

Last week, Le Drian announced that Paris had begun imposing travel restrictions on Lebanese officials for alleged corruption and obstructing the formation of a government, without naming the affected individuals.

The French Ministry for Europe and Foreign Affairs did not respond to an Al Jazeera request about the names of the sanctioned officials.

Separately, Aoun’s adviser Salim Jreissati told Al Jazeera the French foreign minister was giving officials a “push” for a new government, “but it depends on the designated prime minister’s reaction”.

Meanwhile, Le Drian met opposition and civil society groups for two hours on Thursday at the French ambassador’s Pine Residence. Among the groups were the Kataeb party, Taqaddom, the National Bloc, and Beirut Madinati.

She added that the groups stressed that the country’s next government should focus on economic reforms and hold general elections due in 2022.

“We need to hold elections on time before the country collapses. We want this democratic process to continue,” Hatayan said. “We want the international community to know that there is a serious political alternative that is ready to take on elections.”

Hatayan said the meeting did not address sanctions, travel bans, or other matters. “The other things aren’t our business,” she said. “Travel bans or not, it doesn’t change the work we need to do [as a political opposition].” 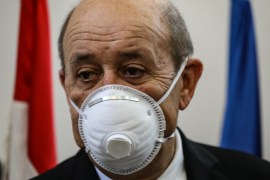 No names announced as gov’t imposes entry restrictions as sanction for role in Lebanon’s political crisis or corruption. 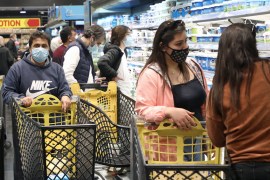 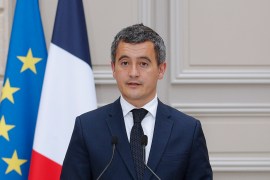