Former Maldives president and current Parliament Speaker Mohamed Nasheed was injured in a blast outside his family home on Thursday, police said in a statement.

“Following an explosion … Speaker of Parliament President Mohamed Nasheed has sustained injuries and is currently receiving treatment at ADK Hospital [in the capital Male],” the statement said on Thursday.

Two close family members, who asked not to be identified due to the sensitivity of the situation, told Reuters news agency that Nasheed was talking and responsive before being treated under anaesthesia at the hospital.

President Ibrahim Mohamed Solih, a close ally of Nasheed, said an investigation into the explosion was under way.

Images from state TV channel PSM showed security services securing the scene of the incident in the capital Male. A foreign tourist was also injured, the channel reported.

“Cowardly attacks like these have no place in our society. My thoughts and prayers are with President Nasheed and others injured in this attack, as well as their families.”

“They have put him under anaesthesia. There is a deeper cut on one of his arms,” the family member told AFP, speaking on condition of anonymity.

At least one of his bodyguards was also taken to hospital. State TV channel PSM reported that a foreign tourist was also injured.

In a statement on Twitter, Foreign Minister Abdulla Shahid said: “Cowardly attacks like these have no place in our society. My thoughts and prayers are with President Nasheed and others injured in this attack, as well as their families.”

The explosion took place as Nasheed was getting into his car in the capital Male, an official from his Maldivian Democratic Party (MDP) told AFP by telephone.

“It looks like some sort of an improvised explosive device, possibly rigged up to a parked motorcycle,” the official said adding that an investigation was under way.

Residents in Male said the blast was heard across the capital.

India’s Foreign Minister Subrahmanyam Jaishankar said he was “deeply concerned” at what he described as an attack on Nasheed.

“Wish him a speedy recovery. Know that he will never be intimidated,” Jaishankar said on Twitter.

He became the country’s first democratically elected president after winning the first multiparty elections in 2008.

He was toppled in a coup in 2012 and was unable to contest the 2018 presidential elections after he was convicted of criminal charges.

However, he returned to the country from self-imposed exile after his party won the 2018 presidential elections and then entered parliament.

Maldives is known for its luxury resort islands but has seen rare violent attacks. In 2007, a blast in a park in the capital wounded 12 foreign tourists. In 2015, former President Abdulla Yameen escaped unharmed after an explosion on his speedboat. 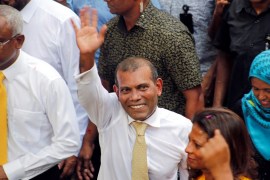 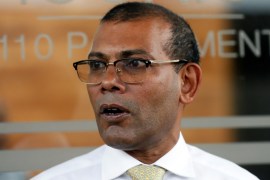 Nasheed, who had been in exile since 2016, welcomed at Male airport by president-elect and hundreds of supporters. 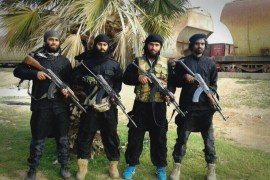 101 East investigates why young men leave the tourist paradise of the Maldives to take up arms in Syria.