Egypt and Turkey said they had held “frank” discussions during the first official diplomatic talks between the regional rivals for eight years, a joint statement said.

“The discussions were frank and in-depth,” the statement released by Cairo and Ankara said on Thursday.

“They addressed bilateral issues as well as a number of regional issues, in particular the situation in Libya, Syria, Iraq, and the need to achieve peace and security in the Eastern Mediterranean region,” it added.

A Turkish delegation, headed by Deputy Foreign Minister Sedat Onal, met on Wednesday and Thursday in Cairo with an Egyptian team led by his counterpart, Hamdi Loza.

Ankara and Cairo have both faced US pressure since the departure of their ally, former President Donald Trump, and both have been extending olive branches to their neighbours.

Erdogan said on March 12 that the two countries have held “intelligence, diplomatic and economic” contacts, adding that he hoped for “strong” ties between the two nations.

Egypt welcomed the move, calling it a “good initiative from the Turkish side that establishes a favourable atmosphere to discuss issues of dispute between the two nations”.

The two countries have also been on opposite sides of the conflict in oil-rich Libya, which descended into chaos in the aftermath of the 2011 NATO-backed uprising that overthrew ruler Muammar Gaddafi.

According to two Egyptian intelligence sources, Turkey is ready to hold a tripartite meeting between Turkish, Egyptian and Libyan officials to agree on disputed issues in Libya, including the presence of foreign fighters.

Turkey said on Thursday that it agrees that all foreign mercenaries in Libya need to leave the country, but Ankara has a bilateral agreement with the Libyan government for its troops to be stationed there.

The Turkish delegation also told Egyptians that Ankara could not hand over Muslim Brotherhood leaders wanted by Egypt, adding that most of those leaders had now legalised their residency in Turkey, the sources said.

Turkish officials did not comment on the content of the talks. However, Turkish Vice President Fuat Oktay said Ankara is fully open to improving its ties with every country in the region, not just Egypt. 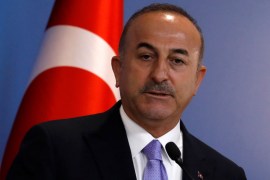 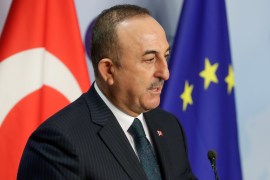 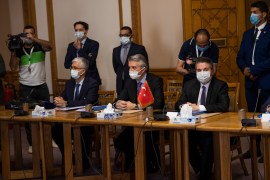 Egyptian and Turkish officials meet for talks to mend rift

Egypt says ‘exploratory’ talks will focus on steps ‘that may lead towards normalisation of ties’ between two countries.