Riot police used tear gas to disperse demonstrators from the main public square in the capital, Bogota, at around 3pm (20:00 GMT) on Wednesday, as well as in other parts of the city where people had assembled.

But the protesters have said they will continue to take to the streets, despite right-wing President Ivan Duque withdrawing the contentious tax reform that pushed them to protest in the first place last week.

“We can’t let this government of Duque continue to keep making things harder for the poorest of us,” she told Al Jazeera, brandishing an anti-government placard.

The protests were sparked by an unpopular tax reform that the government said aimed to stabilise an economy ravished by the coronavirus pandemic. But working- and middle-class Colombians said the plan favoured the rich while placing more pressure on them.

Duque withdrew the proposal on Sunday and his finance minister resigned a day later, but the protesters are now calling for a withdrawal of a proposed health reform and a guaranteed basic income of one million pesos ($260) for all Colombians, among other demands.

“Although the tax reform was the initial spark, current protests in Colombia reflect a wide range of social, political and economic grievances that the Duque government will be hard-pressed to address with existing scripts for national dialogue,” said Arlene Tickner, a political science professor at Bogota’s Rosario University.

Violence increased late on Monday in the country’s third-largest city, Cali, where protesters said police opened fire to disperse the crowds. Videos of police misconduct in Cali – which Al Jazeera was unable to independently verify – were shared widely on social media on Tuesday.

The death toll related to the protests remains widely disputed and wide-ranging between the government and independent NGOs. Colombia’s human rights ombudsman says 24 people have died, while local NGO Temblores, which documents police abuse, estimates that 37 have been killed.

There have been reports of looting and vandalism during some of the protests and those acts have been condemned by local politicians.

Disturbances worsened in Bogota on Tuesday evening, with 30 civilians and 16 police officers injured, the mayor’s office said in a statement, adding that a mob tried to “burn alive” 10 police officers by setting fire to a small police station.

Meanwhile, various United States officials, the United Nations and the European Union have denounced the national police force for opening fire on demonstrators. Celebrities, including Colombia-born musician Shakira – who has been known to steer clear of commenting on political issues – have also spoken out about the violence.

“I ask the government of my country to take urgent measures now to stop the violation of human rights and restore the value of human life above any political interest,” the singer tweeted in Spanish on Tuesday.

But according to Tickner, “growing international pressure to stop police brutality and respect human rights has had little effect on state-executed violence and accountability” so far.

In a video on Wednesday, Duque repeated government allegations that illegal armed groups are engaging in acts of vandalism and looting and he said more than 550 arrests had been made.

“There will be no truce with those who commit these crimes – all of society will take them to justice,” Duque said.

The president had earlier urged a national dialogue “to listen and construct solutions” ahead of the marches, similar to that of 2019, when Colombians had taken to the streets over economic inequality, a slow implementation of the peace process and rising insecurity.

Elizabeth Dickinson, a senior Colombia analyst at the International Crisis Group, said that although illegal groups may have in some cases infiltrated the current protests, “there is no way you could credibly claim that any armed or criminal group is motivating or coercing protesters to the street”.

What is happening is a “legitimate social movement”, she told Al Jazeera.

“Here in the capital Bogota, the number of people living in extreme poverty has tripled in just a year, so this is a real moment of social crisis across the country and I think the protests could be more enduring than in 2019.”

Nevertheless, Sergio Guzman, a political analyst who runs the firm Colombia Risk Analysis, said many of the protesters’ demands are unrealistic – and will not be welcomed by the Duque government.

“Demands such as universal basic income are not feasible under any scenario,” he told Al Jazeera, adding that the protesters have yet to establish a negotiating position that would be considered realistic or acceptable by the government, either.

However, he said the government needs to start addressing more of the protesters’ concerns, especially police brutality.

Dickinson agreed and also said both sides are currently very entrenched in their positions.

“Protesters’ demands are really growing by the day,” she said. “It’s a list of very significant changes for the state and for right or wrong, they would entail very significant, deep reforms to the way that the state functions.” 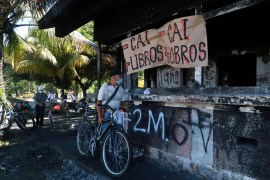 The protests, which began last week, demanded the withdrawal of a tax reform proposed by the government. 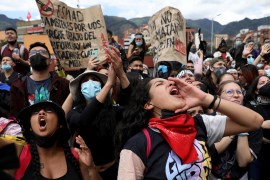 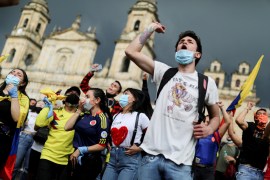 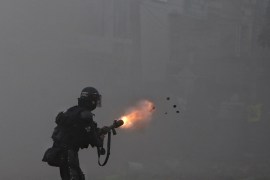