By Charlotte Peet
Correction10 May 2021
An earlier version of this story misspelled Bruno Sousa's name. This has been corrected.

Local media showed live footage of seven armed young men hopping through the roofs of North Zone’s Jacarezinho favela in the early hours of Thursday morning, as bulletproof helicopters hovered over them.

The report said the “extremely suspicious criminals” were attempting to escape from the police. Two passengers on the metro were hit by a stray bullet and one police officer was killed.

Videos and photos shared with Al Jazeera by residents showed grenade explosions, as well as horrific scenes of corpses lying in corridors, multiple bullet holes on residents doors, blood-stained mattresses and clothes and blood flowing down staircases in the favela’s narrow alleys.

The Brazilian media widely applauded the operation – they and Rio’s Civil and Federal Police force have said was a justified crackdown on drug trafficking and other violent crimes in the community.

But human rights activists, residents and public security specialists were horrified and said that the attack could have been motivated by other factors.

“Never in my life have I seen a police operation as lethal as this,” Bruno Sousa, a researcher from Rio’s Centre for Studies on Public Security and Citizenship told Al Jazeera.

“The police officer was killed before 9am in the morning, this could have influenced the number of deaths with the police invading with more force,” added Sousa, who was born and raised in the Jacarezinho favela.

Meanwhile, the United Nations on Friday urged an independent investigation.

“We are calling on the office of the prosecutor to conduct an independent thorough and impartial investigation according to international standards,” Ravina Shamdasani, spokesperson for the UN’s rights office, told Al Jazeera.

“We remind the Brazilian authorities that the use of force should be applied only when strictly necessary and as a last resort where there is an imminent threat to life or serious injuries,” said Shamdasani.

The police have yet to release information on who was killed but residents said that most of the killings were not from shoot-outs.

“One of the men asked to hide in my home. When the police came, I told them that there was someone here, as they would have come in anyway. They went to my daughter’s room and shot him instantly,” said one favela resident in a video shared with Al Jazeera.

“How is my daughter going to sleep now?”

Monica, a human rights activist, who was also in the favela when the raids took place said the police invaded homes in what she describes as “true extermination”.

Joel Luiz Costa, a lawyer and resident of the favela whose team visited multiple houses after the shootings took place, called the operation “cruel” and “barbaric” in a video posted on social media. He said there were clear signs of “execution-style killings”.

Last year, Brazil’s Supreme Court ordered the police to suspend operations during the COVID-19 pandemic, which is raging in Brazil, restricting them to “absolutely exceptional circumstances”.

Initially, after the Supreme Court ban deaths from police operations plunged 70 percent compared with the average from previous months, according to a study from Rio’s Federal Fluminense University. But deaths have since returned after Rio Governor Claudio Castro took office last October.

The country’s highest court has yet to comment whether Thursday’s deadly operation falls under that exception.

The court also requires the police to ask the Public Ministry for approval at least 24 hours before an operation.

Media reports said the Public Ministry had approved of the operation. But Sousa, of the Centre for Studies on Public Security and Citizenship, claimed that the ministry only received information of the operation three hours after it began.

According to a report by the Human Rights Watch, more than 1,200 people were killed by the Rio police force last year. The majority of the people killed are from poor, lower-class neighbourhoods and peripheries.

A separate report from Fogo Cruzado, a digital platform that monitors armed violence in Rio, said that more than 100 children have been killed by stray bullets in the past five years, and the majority go unpunished.

“Operations like today unfortunately are very common in Rio de Janeiro. The police treat raids as completely normal, which each time become more violent. When we have the most deadly police operation in our history, this says a lot,” Cecilia Oliveira, founder of Fogo Cruzado, told Al Jazeera.

Oliveira said aside from the city’s police force, the state and Public Ministry should also be held accountable.

“The Public Ministry rarely investigates police violence, this gives the police impunity. The police don’t do anything alone. It’s not just the finger of the police that pushes the trigger.” 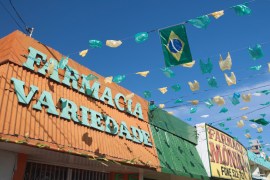 Brazil’s constitution grants its people the right to healthcare, but what does it take for reality to meet aspirations? 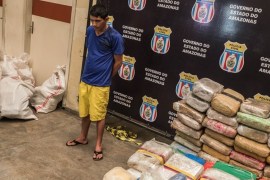 Brazil’s prisons: A battleground in the drug wars

A growing gang war over drugs is fuelling bloodshed in Brazil’s neglected and overcrowded prisons. 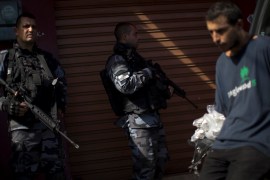