Amnesty International and more than 200 other non-governmental organisations have called for a global arms embargo on Myanmar given the continuing violent crackdown by the military on protesters following the coup there in February.

“It is time for the UN Security Council to use its unique powers to impose a comprehensive global arms embargo in order to try and end the military’s killing spree,” Lawrence Moss, senior UN Advocate for Amnesty International, said on Wednesday.

Mere condemnation by the international community has so far had no effect, he said.

“No government should sell a single bullet to the junta under these circumstances,” the group added. “Imposing a global arms embargo on Myanmar is the minimum necessary step the Security Council should take in response to the military’s escalating violence.”

The country has been in turmoil since the military deposed civilian leader Aung San Suu Kyi on February 1, triggering a mass uprising of daily protests and a nationwide boycott from civil servants.

So far, nearly 770 people have been killed in deadly crackdowns, according to a local monitoring group and more than 4,500 people have been imprisoned. The military government has reported a far lower death toll which it blames on “rioters”.

The appeal echoes a February 24 declaration by more than 100 non-governmental organisations, which urged the Security Council to act swiftly to halt the flow of weapons to the military government.

The Security Council has issued several statements since the coup, calling on the military to restore democracy and halt the excessive use of force against protesters.

But the group of NGOs said that “time for statements has passed”.

“The Security Council should take its consensus on Myanmar to a new level and agree on immediate and substantive action,” said the group.

“An arms embargo would be the centrepiece of a global effort to protect the people of Myanmar from further atrocities and help bring an end to impunity for crimes under international law,” it added.

Speaking from the UN Headquarters in New York, Al Jazeera’s Kristen Saloomey said that the group believed the international community had so far failed to resolve the situation in Myanmar.

“The UN Security Council has met on Myanmar at least five times, but most of those meetings have been behind closed doors and the situation is only appearing to get worse.”

Saloomey added, however, that with the Security Council divided over Myanmar, with China against imposing sanctions, it is unclear whether a resolution will be issued.

“Many diplomats on the council share the same concerns with the group of NGOs … others believe soft pressure should continue,” she said.

The appeal for an arms embargo came as a shadow government of deposed Myanmar politicians said on Wednesday it has set up a “people’s defence force” to protect civilians in the face of the police and military deploying deadly arms against anti-coup protesters.

A group of deposed lawmakers who call themselves the National Unity Government (NUG) and are working underground to oppose the military government said in a statement that the force is intended as a precursor to a “Federal Union Army”, referring to a long-touted idea of bringing anti-coup dissidents together with Myanmar’s ethnic rebel fighters into an army.

Some in the anti-coup movement have called for unity among Myanmar’s myriad rebel armed groups to defeat the military’s well-trained soldiers.

A few of the groups have condemned the military coup and the use of violence against unarmed civilians. Some are also providing shelter and even training to dissidents who flee into their territories.

But the more than 20 groups – made up of disparate ethnic minorities agitating for more autonomy – have long distrusted the ethnic Bamar majority, including politicians affiliated with Aung San Suu Kyi’s government.

An official of the Karenni National Progressive Party (KNPP) – which has said it is sheltering anti-coup dissidents – expressed scepticism at the NUG announcement.

“As far as I know, it is the people themselves who walk into the jungle and receive the training from the (ethnic armed organisations) … it is not decided by the NUG,” said KNPP Vice Chairman Khu Oo Reh.

He added that while the NUG has spoken with many rebel groups about a militia made up of civilians, “I have no idea what their intentions are.” 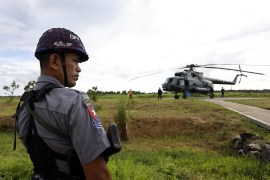 The Kachin Independence Army says the helicopter was shot down in retaliation for air strikes by the Myanmar military. 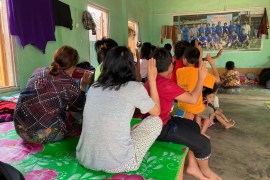 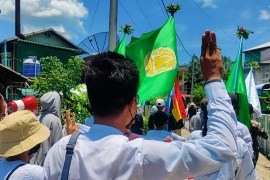 Generals who seized power in February 1 coup seek to further isolate country amid continuing opposition to their rule.