The head of Libya’s unity government has told Al Jazeera he is hopeful that thousands of foreign mercenaries will soon withdraw from the country.

Libya’s Prime Minister Abdul Hamid Dbeibah said in an interview with Al Jazeera Arabic, to be screened on Wednesday, that following discussions with several countries, there were “hopeful signs” that foreign armed groups would leave Libya.

The presence of an estimated 20,000 foreign fighters and mercenaries on Libya’s territory is seen as a threat to the United Nations-backed transition leading to December 24 elections.

Libya’s unity government has for months demanded their “immediate” withdrawal.

The North African country descended into chaos after dictator Muammar Gaddafi was toppled and killed in a 2011 NATO-backed uprising, resulting in multiple forces vying for power.

Fighting only came to a halt last year and a formal ceasefire in October was followed by the establishment of a unity government led by interim premier Dbeibah in March.

The unity government, which replaced two rival administrations that had ruled eastern and western regions of the country, has also prioritised reconciliation efforts ahead of the national elections, Dbeibah said.

Dbeibah told Al Jazeera that while 80 percent of state institutions have been unified, the military institution remains divided. He added however that the 5+5 Joint Military Commission was working on unifying the military.

The commission consists of five senior military officers from the UN-recognised Government of National Accord (GNA) in Tripoli and five from its rival, the self-styled Libyan National Army (LNA) of eastern-based renegade military commander Khalifa Haftar.

Dbeibah said his unity government does not coordinate matters with Haftar, but instead all coordination is carried out in Benghazi with the help of the police services and mayor.

He added that the elections will be held on time.

“We want the constitution, the elections, and the end of the transitional phase,” he told Al Jazeera.

Sources told Al Jazeera last month that the cabinet meeting was postponed after gunmen loyal to Haftar prevented a government delegation from entering the city.

They described armed men and civilians loyal to Haftar stopping Dbeibah’s security detail after their plane landed at Benina Airport.

The move forced the delegation – which was planning to prepare for the first visit to Benghazi by Dbeibah since he assumed office in March – to fly back to Tripoli.

The incident underscored the continued friction between rival camps in Tripoli in the west and Benghazi in the east – the stronghold of Haftar’s LNA.

The rival administrations were formed in the west and east in 2014, further dividing the country already beset by chaos and violence that followed the 2011 uprising against Gaddafi.

Dbeibah was appointed in March to lead the new Government of National Unity (GNU) through a UN-facilitated process aimed at bringing peace and stability to Libya with the reunification of state institutions and an election in December.

The GNU was approved by the eastern-based parliament and the Tripoli and Benghazi administrations, which peacefully handed over their powers.

But the war-torn country faces a myriad of challenges.

In addition to the presence of armed groups, disputes continue over the flow and distribution of Libya’s substantial oil revenues, parliament has opposed Dbeibah’s budget plans and the main highway across front lines remains closed.

Dbeibah also told Al Jazeera that he remained committed to the GNA’s 2019 maritime agreement between Libya and Turkey, which aimed to boost Turkish maritime rights and influence in the Eastern Mediterranean and angered Greece and Cyprus.

“We disagree with Greece in its evaluation of the Libyan-Turkish maritime agreement. It serves Libyans and we will not give up on it,” he said. 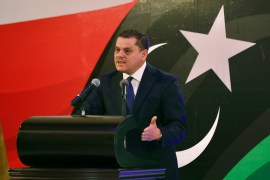 PM Abdul Hamid Dbeibeh’s trip to Benghazi planned for Monday called off after gunmen stop delegation at the airport. 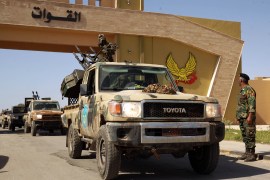 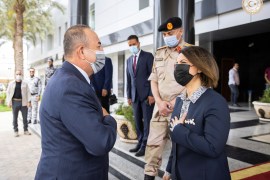