Teklay Hailay* has been so worried since November 4 that he has had trouble sleeping. That is when Ethiopian Prime Minister Abiy Ahmed declared in a televised speech the start of military operations in Ethiopia’s Tigray state in response to what he described as “traitorous” attacks on military camps.

The offensive came on the heels of steadily growing tensions between the federal government and the Tigray People’s Liberation Front (TPLF), which used to rule the northern region of some six million people.

Abiy, who in 2019 won the Nobel Peace Prize partly for his efforts to end two decades of frozen conflict with neighbouring Eritrea, rushed to declare victory over the TPLF in late November after government forces entered the regional capital, Mekelle. But fighting has dragged on and reports of mass atrocities keep emerging, leading to fears of a protracted conflict with devastating effects on the local civilian population.

What has garnered less attention, however, is the plight of Teklay’s ethnic kin: the Irob, a minority group with their own distinct language who live among the much larger Tigrayan population in the embattled region. Numbering about 60,000, of whom an estimated 35,000 live in semi-arid mountainous areas in Tigray’s northeastern corner bordering Eritrea, the Irob now face an existential crisis in addition to the humanitarian suffering caused by the ongoing conflict, activists say.

“The social structure of the Irob community has been turned totally upside down,” Teklay, who lives in the capital Addis Ababa, told Al Jazeera. “Many, perhaps up to 50 percent of the original population … fled to regional cities in Tigray and even to Addis Ababa, leaving mostly elderly and children behind.” 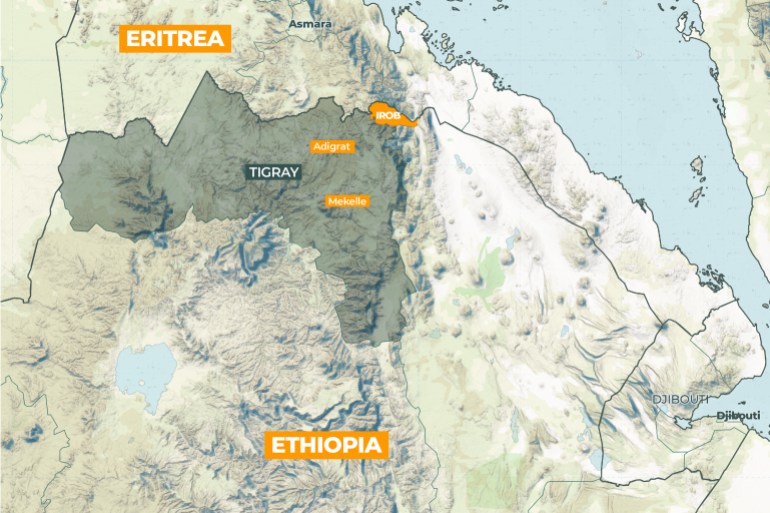 Since the early days of the conflict, the Irob district has been under the total control of Eritrean forces who crossed into Ethiopia to support its federal troops in the fight against the TPLF.

The Eritrean government of Isaias Afwerki and the TPLF, which for decades used to dominate Ethiopian politics until Abiy took power three years ago, have a longstanding animosity over a complex territorial, economic and political dispute that in 1998 devolved into a brutal two-year war that killed tens of thousands of people.

With the Irob district inaccessible and under a communications blackout over the past six months, Teklay has only been able to receive scattered information on the humanitarian situation from people who fled south to other cities in Tigray and Addis Ababa.

“I have helped to conduct memorial rites [in Addis Ababa] for 63 Irob natives killed by Eritrean troops, with some of the deceased being my relatives and friends,” he said. “Among the 63 dead is a young man, whose farmer father was abducted by Eritrean soldiers more than two decades ago, never to be seen again.”

The 40-year-old said the restrictions in Irob areas have made it “impossible to know the real death toll” – but that is not the only thing that has him worried. There are major fears of starvation, too.

“The conflict started just as the crop harvest season was about to start, a major concern for an already food insecure area,” he said.

Teklay and other Irob people living across Ethiopia are keeping a low profile, especially after the arrest earlier this year of Dori Asgedom, leader of the pro-Irob Assimba Democratic Party over his opposition to the war, according to activists.

This means it has fallen to people in the diaspora such as Fissuh Hailu to try to raise awareness about the plight of the Irob community.

“Ever since the start of the war, Eritrean forces have engaged in indiscriminate killings and shellings of Irob areas,” said Fissuh.

“People are terrified and live in constant fear of [a] next round of civilian massacres and abduction by the invading forces. Civilian properties have all but been looted in the area.”

Fissuh also said he had received reports that Eritrea had already appointed local administrators, with the “Eritrean military continuing to terrorise, starve the locals as well as forcing the[m] to slaughter their animals to feed them”.

The reports could not be independently verified.

While the Irob community, like the rest of Tigray, has been enduring the disastrous impact of the conflict that has killed thousands of people and displaced nearly two million, the Irob also fear that if peace comes someday, it could be at their expense.

That is because the Ethiopia-Eritrea Border Commission (EEBC) that was formed in the aftermath of the 1998-2000 war handed approximately one-third of Irob land to Eritrea, even though the decision has not been enforced. Addis Ababa refused to implement it unconditionally and instead called for dialogue. Eritrea said there was no need for talks and stressed the only way forward was the unconditional demarcation of the border.

“If the decision of the EEBC is implemented as it is, this tiny Irob land and people will be divided into two belligerent nations. That, almost certainly, will be the end of the existence of the Irob minority as a viable ethnic group,” argued Fissuh.

He said his community had not yet recovered from the effects of the bitter 1998-2000 war when the fresh round of torment struck the Irob six months ago. “During the two-year border war, the Irob community, just like now, was under Eritrean occupation, with Eritrean forces evicting the locals and forcibly disappearing 96 community members,” Fissuh said.

Martin Plaut, a longtime observer of politics in the Horn of Africa, said the Irob are potentially looking at a bleak future, with the division of the community, as envisaged by the EEBC, being the most likely scenario.

“The Irob district has effectively been annexed by Eritrea, which is treating it as part of its territory,” he told Al Jazeera. “Links with the rest of Ethiopia have apparently been cut and maps of humanitarian aid show that none appears to be reaching the area – leaving people on the edge of starvation,” added Plaut.

“It’s almost as if Ethiopian Prime Minister Abiy has washed his hands of the Irob.”

Al Jazeera reached out to Eritrea’s information ministry and to Eritrea’s mission to the African Union for comment, as well as to the office of the Ethiopian prime minister, but no response was received by the time of publication. This article will be updated upon receipt of a response.

*Name changed to protect their identity