A senior Hamas official has said Israel must halt its “aggression” in both the Gaza Strip and Jerusalem as Egypt’s intelligence chief met the Palestinian group’s leaders in the besieged coastal enclave to try to bolster a ceasefire between Hamas and Israel.

Khalil al-Haya spoke after meeting Abbas Kamel, who visited Gaza after meeting Israeli Prime Minister Benjamin Netanyahu on a trip aimed at shoring up an informal ceasefire brokered by Cairo.

His visit – the first by an Egyptian intelligence chief to the enclave since the early 2000s – was also aimed at discussing reconstruction plans following the recent Israeli bombardment of Gaza, according to Egyptian and Palestinian officials.

Kamel, who has not given public statements, is the highest-ranking Arab official to visit Gaza since 2018. He met with Yahya Sinwar, the top Hamas leader in Gaza.

“We discussed several files, most importantly the necessity to oblige the occupation to stop its aggression on Gaza, Jerusalem, Sheikh Jarrah and all over Palestine,” al-Haya told reporters. He said Israel must also fully lift the blockade it imposed on Gaza when Hamas seized power from rival Palestinian forces in 2007 after winning 2006 elections.

“If this happens, then calm and stability could return,” he said.

Egypt played a pivotal role in brokering a ceasefire between Israel and Hamas, which governs the Strip, bringing an end to 11 days of fighting.

The flare-up in violence followed weeks of tensions in occupied East Jerusalem ahead of a now-delayed court ruling on the forced expulsion of Palestinian families in the Sheikh Jarrah neighbourhood. Israeli forces cracked down on protesters in the neighbourhood and at the nearby Al-Aqsa Mosque compound, which is revered by Muslims and Jews, who call it the Temple Mount.

After issuing an ultimatum demanding Israeli forces stand down from sites in occupied East Jerusalem, Hamas fired a barrage of rockets into Israel, with Israel launching air raids on Gaza shortly afterwards.

Israel bombarded the territory from air, land and sea for 11 days, killing at least 253 people, including 66 children. Rockets fired by armed groups in Gaza killed at least 12 people in Israel.

Al-Haya ruled out linking Gaza’s reconstruction to Hamas’s release of two Israeli civilians and the remains of two Israeli soldiers killed in a previous military campaign.

The Egyptian-brokered truce has held but did not address any of the underlying issues that remain.

Gaza has been under a crippling Israeli-Egyptian blockade since 2007.

The siege has slowed and, at times, completely halted the flow of basic necessities including fuel into the Strip. It has also stopped the flow of construction materials needed to rebuild much of the enclave’s infrastructure, which was damaged in the previous Israeli military campaigns of 2008, 2012 and 2014.

Kamel’s visit is seen as an effort by Cairo to regain a more vital role in mediation between Israel and Hamas and revive the stalled Israel-Palestinian peace process.

Following the meeting with Kamel in Gaza, Sinwar said “there is a real chance for progress to be made” on resolving the issue of prisoners, though he added that Hamas demanded those negotiations be held separately from the ceasefire talks.

Meanwhile, Al-Haya was also expected to announce plans by Cairo to build a housing city in the enclave.

Kamel also met Palestinian President Mahmoud Abbas in the occupied West Bank city of Ramallah on Sunday and handed him a message from el-Sisi affirming Cairo’s support for Palestinians and Abbas, MENA said. 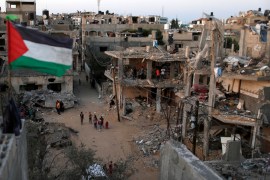 In first Israeli FM visit to Egypt in 13 years, talks include reconstruction of the ravaged Palestinian enclave. 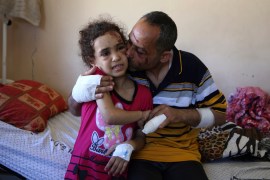