The event was not announced in advance and media reports said guests were invited at the last minute to the Roman Catholic cathedral in central London, adding even senior members of Johnson’s office were unaware of the wedding plans.

He is only the second British prime minister to marry while in power, and the first in nearly two centuries. The last was Robert Jenkinson in 1822.

“The prime minister and Ms Symonds were married yesterday afternoon in a small ceremony at Westminster Cathedral,” Johnson’s office said on Sunday.

“The couple will celebrate their wedding with family and friends next summer.”

Weddings in England are currently limited to 30 people because of COVID-19 restrictions.

Johnson, 56, and Symonds, 33, have been living together in Downing Street since Johnson became prime minister in 2019.

On Saturday, the cathedral was suddenly locked down at 1:30pm and Symonds arrived 30 minutes later in a limo, in a long white dress with no veil, media reports said.

The couple announced last year they were engaged and expecting a child. Their son, Wilfred Lawrie Nicholas Johnson, was born in April 2020, just weeks after Johnson left intensive care as he recovered from a severe case of coronavirus.

Earlier this month, the Sun newspaper reported wedding invitations had been sent to friends and family for July 2022.

Political colleagues sent congratulations to the couple as the news became official on Sunday.

“I think it’s a wonderful thing for both of them that they have made their marriage vows to one another,” senior minister Nadhim Zahawi told Sky News.

Work and Pensions Secretary Therese Coffey congratulated the couple on Twitter, and so did Northern Ireland’s First Minister Arlene Foster.

“Huge congratulations to @BorisJohnson & @carriesymonds on your wedding today,” she wrote.

He was once fired from the Conservative Party’s policy team while in opposition for lying about an extramarital affair. He has been divorced twice and refuses to say how many children he has fathered.

Johnson’s last marriage was to Marina Wheeler, a lawyer. They had four children together but announced in September 2018 they had separated. The couple only finalised their divorce last November.

Johnson also reportedly has a daughter born as the result of an affair. 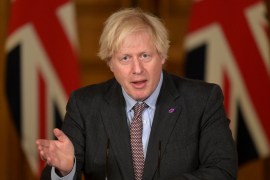 Is Boris Johnson’s ‘mea culpa’ really the best the UK can expect?

Britain’s prime minister has apologised for 100,000 COVID-19 deaths, but says ‘we did everything we could’. Really? 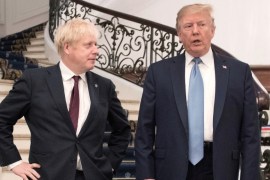 After a mob of Trump supporters invaded the US Capitol on January 6, some have changed their tune. 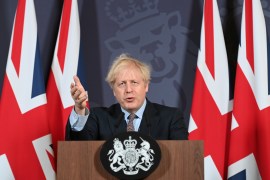