The mother of eight, along with thousands of other already internally displaced people (IDP), fled there after armed militiamen on April 4 stormed Abu-Zar camp and burned it down amid a resurgence of violence between members of the region’s Masalit and Arab communities.

“You only carry your children and the most important papers and run,” said the 56-year-old, who has already been displaced twice since the beginning of the war in Darfur nearly 20 years ago.

Witnesses accused militias affiliated with the Rapid Support Forces (RSF) – a paramilitary unit established from the remnants of the former “Janjaweed” militia which is blamed for past atrocities – of attacking the site that hosted some 14,000 people. The flare-up grew out of a shooting that killed two people from the Masalit community, according to the United Nations humanitarian affairs agency, with both sides then mobilising armed men.

“Because of a problem between some people, militiamen attacked so many neighbourhoods in Hai al-Jabal first, killing and burning, till they entered Abu-Zar camp,” Hussain told Al Jazeera on the phone. “They came on nine vehicles with their DShK [Russian anti-aircraft weapon] to burn our camp, so we ran away,” she said.

“How can we stay in the fire and burning?” 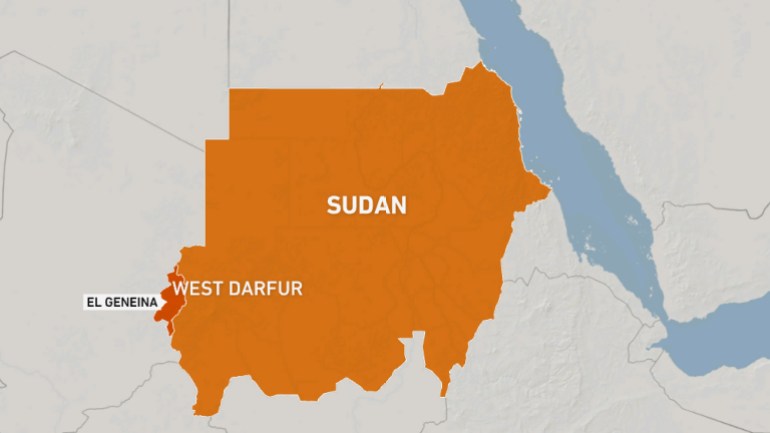 The latest bout of fighting killed at least 130 people and prompted Sudan’s government to declare a state of emergency in the region. It came on the back of waves of violence in and around El Geneina, as well as other parts of Darfur and South Kordofan causing hundreds of deaths. The escalation also forced the UN to suspend all humanitarian activities in El Geneina, an aid-delivery hub, in a decision affecting more than 700,000 people.

Many of the city’s government buildings have now been turned to makeshift hosting sites for IDP fleeing militia attacks on their camps.

According to the UN, in the first four months of this year, some 237,000 people have been newly displaced, almost five times as many people for the whole of 2020.

This coincides with the withdrawal since the start of the year of joint UN-African Union peacekeeping forces (UNAMID), set up in 2007 to protect civilians and facilitate humanitarian aid.

The pulling out followed the signing of an ambitious peace deal in October last year between some rebel groups and Sudan’s transitional government in Juba, the capital of neighbouring South Sudan. The groups that signed the landmark agreement, most of whom hail from the Zaghawa community in north Darfur, included the Justice and Equality Movement (JEM) and the Sudan Liberation Army-Minni Minawi (SLA-MM). JEM’s Gebril Ibrahim has since become Sudan’s finance minister, while SLA-MM’s Mini Minawi has been appointed governor of Darfur.

But an SLA faction led by Abdelwahid Mohamed al-Nour, which draws support from the Fur tribe, did not sign the deal.

Meanwhile, there have been complaints over the implementation of the Juba deal, which sets out terms to integrate rebels into the security forces, be politically represented and have economic and land rights, by some of the signatories.

“The government is not keen, unwilling, and not ready to implement the security arrangements,” Sulieman Sandal, JEM’s political secretary, said last week.

The conflict in Darfur erupted in 2003 when mostly non-Arab rebels took up arms against the Arab-dominated central government in the capital, Khartoum, accusing it of political and economic marginalisation. In response, longtime ruler Omar al-Bashir armed the RSF to crush the revolt. Hundreds of thousands of people have been killed and millions displaced in the war, which saw al-Bashir indicted by the International Criminal Court (ICC) for alleged war crimes, genocide and crimes against humanity.

The fighting has slowed down over the years but clashes periodically break out. In 2019, al-Bashir’s military overthrow after months of protests against his rule raised hopes among many Darfuris, but attacks against civilians have continued. In the meantime, former RSF commander Mohamed Hamdan Dagalo, better known as Hemeti, has become the deputy head of Sudan’s ruling sovereign council.

“After al-Bashir’s fall, local Arab communities felt emboldened by the rise of the RSF at the national level, but they [are] also worried that Hemeti’s policy of reconciliation with non-Arab communities and rebels could backfire on them,” said Jerome Tubaina, a researcher for the International Federation for Human Rights who was on a recent visit to West Darfur.

“On their side, the Masalit, the historically dominant community in the state, felt it was time for them to reclaim the land they had lost during the war,” he added.

Some of the Masalit who had fled to neighbouring Chad when the war began returning to the region after al-Bashir’s overthrow, but they found their lands were taken by Arabs.

Mohamed Abdullah al-Douma, governor of West Darfur state, has on multiple occasions blamed militias coming from Chad for launching attacks against civilians. At the same time, many Darfuris accuse Sudanese government forces of failing to protect them in the wake of UNIMAD’s withdrawal, with some members of the Masalit community reportedly reforming their own militias.

“There were deaths on both sides. All government forces remained unable to stop the violence,” Tubiana said of the recent fighting.

“The only hope is that the new joint forces that should be created by the Juba agreement, this time including former rebels, could do better,” he said.

But back in El Geneina, displaced civilians are still insecure.

“We don’t feel safe here,” said El-Nour Abdullah speaking from the building of the Ministry of Agriculture in the city. The 35-year-old has taken shelter there with his newly-wed wife and parents since January after Arab militias burned down the Krinding IDP site the previous month.

“Even last night there was a shooting between different armed people at a market in central El Geneina; some [people] then threatened the doctors at the hospital to stop treating other patients and to treat their injured person,” Abdullah told Al Jazeera.

“There’s no feeling of safety here,” he said.