Dozens of people died when Mount Nyiragongo volcano, one of the world’s most active, roared back into life a week ago, sending rivers of lava spreading towards the nearby city of Goma that destroyed thousands of homes along the way. The lava stopped just short of the city limits, but thousands more people fled on Thursday when the government warned that the volcano could erupt again at any time.

Most people have headed to the town of Sake or the Rwandan border in the northeast, while others have fled by boat across Lake Kivu. Nearly 10,000 people are taking refuge in Bukavu on the lake’s southern bank, according to Governor Theo Ngwabidje, many of them in host families.

In Sake, some 20 kilometres (13 miles) northwest of Goma, people slept wherever they could – on the side of the road and inside classrooms and churches.

Kabuo Asifiwe Muliwavyo, 36, said she and her seven children had not eaten since arriving on Thursday.

“But since we moved, there is nothing here … We are starving.”

Evacuee Eugene Kubugoo told AFP news agency the water was giving children diarrhoea and said: “We don’t have anything to eat or any place to sleep.”

Hassan Kanga, a lawyer who fled after the eruption, said: “They told everyone that assistance would be organised, that money would be disbursed by the government.

“And yet, you find us under the stars.”

Al Jazeera’s Malcolm Webb, reporting from Goma, said “people have lost everything they own”.

“Many live hand to mouth – it’s hard to make a living in Goma; there’s a lot of money moving around in this city, it’s the nexus for the mineral trade, but there are very few formal jobs and almost zero support from the government’s public services,” he said.

“This is absolutely devastating for the people who have lost all of their earthly possessions and their homes and in some cases, even relatives, under the smoldering pile of lava.”

“With an increased risk of a cholera outbreak, we are appealing for urgent international assistance to avert what could be a catastrophe for children,” said Edouard Beigbeder, UNICEF’s representative in the DRC.

The evacuation order was issued about 1am local time on Thursday after radar images showed molten rock flowing under Goma.

The movement of magma caused cracks in the ground and hundreds of earthquakes, which could allow it to burst through to the surface in a fresh eruption, the Goma Volcano Observatory (OVG) said.

Volcanologists say the worst-case scenario is of an eruption under the lake. This could release hundreds of thousands of tonnes of carbon dioxide (CO2) that are currently dissolved in the water’s depths. The gas would rise to the surface of the lake, forming an invisible cloud that would linger at ground level and displace oxygen, asphyxiating life.

But the frequency and intensity of the ground tremors had lessened in the last 24 hours, suggesting the risk of a fresh eruption was subsiding, Celestin Kasareka Mahinda of the OVG said on Friday.

“I don’t think we will have a second eruption. The problem is the risk of fractures, but the risk is small, around 20 percent,” he told Reuters.

Congolese authorities, meanwhile, reopened the main road which was split in two by lava, the UN Office for the Coordination of Humanitarian Affairs (OCHA) said on Thursday.

On Friday, almost all of the shops and banks in central Goma were closed, and just a handful of people and some motorcycle taxis were on the usually bustling streets.

In the poorer districts in the north of the city, a handful of stores were open and there were more people, including children who gambolled near a water truck.

“I will stay in the city. I know that I’m in imminent danger but I don’t have a choice,” said Aline Uramahoro, who has a beer store. “I will leave when the volcano starts spitting.”

Herman Paluku, who gave his age as 94, said he had seen them all – and insisted he would not budge this time.

“There is a small hill near here which means that the lava does not reach us. And that’s what protects us a bit,” he said in Swahili, his hands sweeping the air.

“I can never leave here, in this situation. I can’t.” 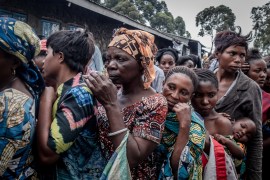 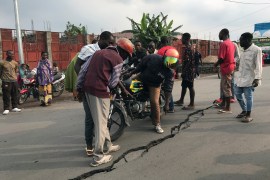 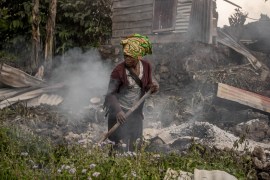