A Burkina Faso government spokesperson confirmed the move in a WhatsApp message, saying “journalists and reporting teams’ safety and the dignity” of the internally displaced people (IDPs) were “essentially” the two reasons behind the ban.

“In the future, these two factors should be taken into consideration and the government could then consider alternative arrangements,” the spokesperson added.

It is understood a May 2020 report by Oxfam focusing on the plight of female IDPs and their vulnerability to sexual abuse may also have played a part in the government’s decision to ban journalists, according to a senior humanitarian source.

Burkina Faso’s Ministry of Women, National Solidarity, Family and Humanitarian Action has been rejecting requests by journalists to visit IDP sites since as early as October 2020, one month before Burkina Faso’s election that returned President Roch Kabore to office.

Al Jazeera spoke by phone to several people living at an IDP site in the northern town of Barsalogho. Asked what they thought of the ban, one person replied: “Well, if the journalists can’t have access to us to report, how will people be aware of the situation and help?”

Asked if they felt their dignity was being violated by reporting carried out by journalists, the person replied: “[The government] are the highest authority and we can’t say no to them, but if they can help us to get out of this situation, that’s OK. Regarding the ban, it’s really confusing.”

Al Jazeera also spoke to five other IDPs who also said they were against the ban.

Burkina Faso has been gripped by a security crisis that has spread across the western portion of the Sahel region in recent years, killing thousands of people and leaving some 3.5 million in need of humanitarian aid.

There are more than 1.2 million IDPs – about one in 20 people in the country – spread across 269 official IDP sites, according to recent figures from the Burkinabe government. Last year, the United Nations said Burkina Faso’s displacement crisis was the fastest-growing in the world.

The largest official IDP sites are in towns and cities such as Djibo, Fada N’Gourma and Koungoussi, where the surrounding countryside is blighted by near-daily attacks. The cities themselves have large military presences, offering a degree of security to IDPs.

There are, however, several large IDP sites in towns and cities where there has never been a security incident in the urban area or the roads connecting them to the capital, Ouagadougou – one example being Kaya, a major humanitarian hub that up until last year, was frequently visited by journalists reporting on the IDP crisis.

Now, the ban has caused concern about press freedom and visibility for the country’s humanitarian crisis among journalists and aid workers alike – rules banning journalists from visiting IDP sites do not exist in other Sahelien countries affected by the conflict between state forces and armed groups linked to al-Qaeda and ISIL (ISIS).

Assane Diagne, West Africa director of media freedom organisation Reporters Without Borders, offered this statement in response to the ban: “No information is worth the life of a journalist. So, any measure for the protection of the journalists in the Sahel region is welcomed. But, we fear that the fight against insecurity will serve as a pretext to block or censor information on displaced people. The ideal strategy would be to find the means to ensure the safety of the journalists who wish to cover this area and to count on their professionalism and their sense of responsibility.”

Last month, two Spanish journalists and an Irish conservationist were killed in an ambush in eastern Burkina Faso, while earlier this month a French journalist was kidnapped in neighbouring Mali. However, the Spanish journalists were not reporting on IDPs and were working in an area known to be extremely dangerous.

A French freelance journalist, who covers Burkina Faso and asked for their name to be withheld, told Al Jazeera: “I don’t understand the reasons for the restrictions, since most sites seem to be secured and supervised, not to mention the fact I have always worked with respect for people’s requests for anonymity.”

They pointed out the ban may even serve to increase the risk to journalists’ safety since media workers can no longer travel to IDP sites with most NGOs that offer security. Some may seek to access less secure, unofficial sites.

“Without access to the field and to these essential testimonies, how can we tell the story of the displaced? How do we put a face on the batches of figures and the reports? The Sahel crisis seems to me more and more dehumanised and the information more incomplete and biased,” the journalist added.

“It robs IDPs of the opportunity to tell their stories and violates their rights to be heard by the international community. It also denies the general public a chance to assess whether enough is being done to alleviate their suffering and mobilise for change.”

IDPs kept away from cities

Further compounding the invisibility of the humanitarian crisis, community leaders say IDPs are also being discouraged from going to big cities, with people that have made their way to Ouagadougou – where there are no official IDP sites – saying they have received little to no government support.

“There is no support from the government for IDPs in Pazani at the moment,” said Ali Tapsoba, a community leader and IDP at the Ouagadougou suburb hosting an estimated 3,000 peop,e.

“Two weeks after our arrival [in July 2019], children received food kits. And from that date onwards, we have received nothing from the government.”

Meanwhile, the IDPs at Barsalogho said the situation at their site was not getting better either. “We have access to care, but there is a food issue. We have food but, it’s not sufficient for everyone,” said the person interviewed for this story.

“That is why we are suffering.” 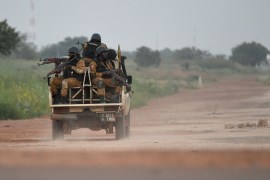 Armed groups displace some 17,500 people in Burkina Faso in recent days, UNHCR says, in attempt to cause ‘mayhem’. 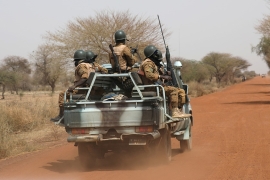 Gunmen kill 18 in Burkina Faso attack, force many to flee