Tehran, Iran – Seven candidates have been allowed to run in Iran’s presidential elections on June 18, and none of them is a prominent reformist or pragmatist.

The interior ministry on Tuesday announced the list handed to it the night before by the Guardian Council, a 12-member constitutional vetting body overseen by Supreme Leader Ayatollah Ali Khamenei that is tasked with evaluating potential candidates’ qualifications.

Among the 585 other hopefuls who were disqualified by the council were supreme leader adviser and former parliament speaker Ali Larijani – a pragmatist conservative who has veered more to the centre in recent years – and current reformist First Vice President Eshaq Jahangiri.

Former two-term President Mahmoud Ahmadinejad was also, as expected by many, disqualified. While signing up, he said he would boycott the elections if he was prevented from running.

Tuesday’s results only solidify conservative Raisi’s position as by far the top candidate, as Larijani and Jahangiri were seen as the only candidates who could have a remote chance of challenging Raisi in an election expected to have low voter turnout amid public disillusionment.

Several candidates have already resigned in favour of Raisi and more are expected to follow suit before election day.

Raisi released a short video saying since he heard about the final list, which was leaked by hardline news website Fars on Monday night, he has been trying to lobby high-level officials to qualify other candidates in order to make the election more “competitive”.

Unconfirmed reports on Tuesday also said outgoing moderate President Hassan Rouhani sent a letter to the supreme leader asking him to allow reformist and moderate candidates to be qualified in order to level the playing field.

His government had protested the “removal” of these candidates earlier this month since the Guardian Council had abruptly made a proclamation, which some viewed as illegal, changing election laws.

The council had declared that it would only consider candidates aged between 40 and 75, who have no criminal record – including political dissent – and are able to prove at least four years of senior executive leadership experience.

That proclamation had automatically disqualified prominent reformist Mostafa Tajzadeh, who was jailed for seven years following the 2009 Green Movement which disputed Ahmadinejad’s reelection, and current ICT minister Mohammad Javad Azari Jahromi, who will be 40 later this year.

Foreign Minister Mohammad Javad Zarif also said he will not run shortly after a leaked confidential audiotape of him candidly discussing internal power struggles drew the public ire of the supreme leader.

Asked by state television on Tuesday whether all political orientations enjoy representation in the elections, Guardian Council spokesman Abbas Ali Kadkhodaei said “there is no necessity for the council to make decisions based on political groups or factions” since it only considers the constitution.

Disqualified applicants are not allowed to appeal the council’s decision.

Sadegh Amoli Larijani, the disqualified Larijani’s brother who has a seat at the Guardian Council, said in a tweet after the list was published that in his 20 years at the council, he has “never found its decisions so indefensible”.

He said he found fault with the council’s decisions on both those who were qualified and those disqualified, alleging interference by security organisations in the decision-making process.

Approved candidates can now start campaigning until June 16, two days before the election, allowing for a one-day period when campaigning is banned. Candidates will have three televised debates whose dates have not been announced.

The interior ministry has said it could extend voting until 2am on June 19 since the polls will not operate at full capacity to observe COVID-19 guidelines in the country worst hit by the virus in the Middle East.

Health minister Saeed Namaki on Tuesday warned that if health protocols are broken during the election, Iran could soon face a fifth deadly wave of the virus. 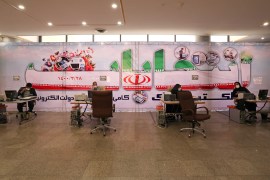 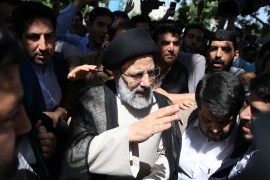 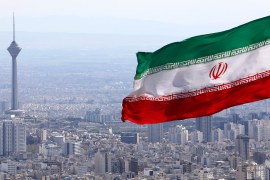 The periodic rise of voting in Iran does not point to an affirmation of the ruling regime’s legitimacy.