It was one of the several landmark structures targeted by Israeli fighter jets during its 11-day assault on the besieged Gaza Strip.

The nine-floor al-Johara Tower in the heart of Gaza City was struck by several missiles on May 12. It housed Matar’s law firm, which was previously an apartment owned by her father.

The 34-year-old was at home watching the news when she found out the building was targeted. 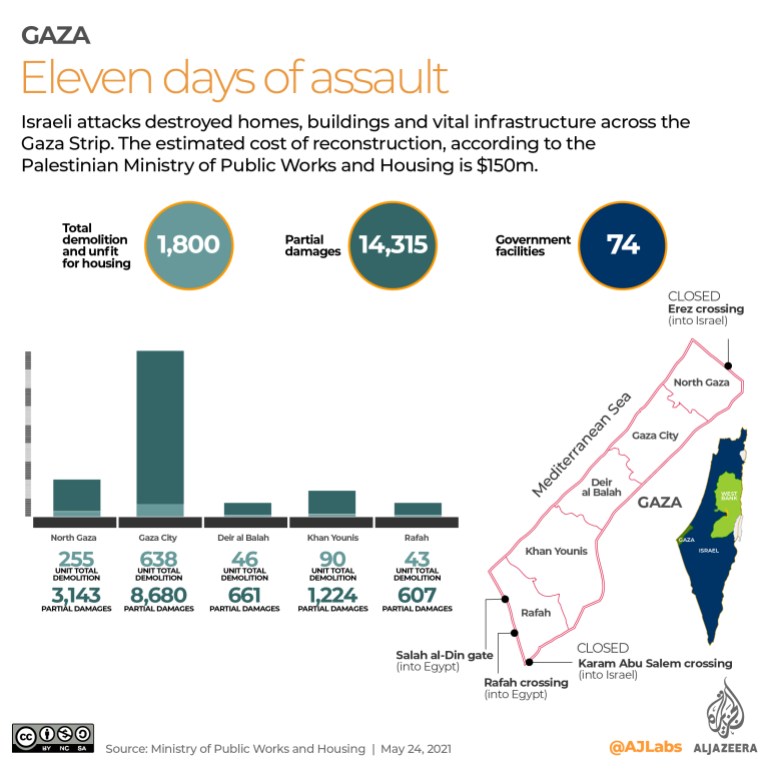 “Finding out this way consumed me. I felt helpless,” Matar told Al Jazeera, crying. “I couldn’t stop it. I couldn’t tell them, please just leave my office alone, please don’t do anything to harm it. It was my baby.”

Starting her business was a “lifelong dream”. On a regular day, Matar and her colleagues would spend up to 12 hours in the office that she described as a “second home”.

She had many of her personal belongings in the office, including several awards, pictures of her late fiance and gifts from her friends.

All of that was destroyed in a blink of an eye. But what remained, she said, are “endless memories engraved in my heart”.

Matar knows rebuilding her business will not be easy. Like many others, she wonders how so much will be brought back while Gaza remains under siege. More importantly, she asks, who will pay for all the damage.

Israel’s bombardment killed 253 Palestinians, including 66 children. Wreckage and rubble surround makeshift camps across Gaza, which has been under a crippling siege since 2007.

The attacks also destroyed 1,800 residential units that are now unfit for housing, and partially destroyed at least another 14,300 housing units, forcing tens of thousands of Palestinians to take shelter in United Nations-run schools.

Some 74 public buildings, including local municipalities, were also destroyed, according to figures released by the information ministry run by Hamas, the group that governs the Gaza Strip.

Since the announcement of the ceasefire, homeowners, shopkeepers and businesses have been assessing damages incurred and examining what has been left of their lives.

Tamer Baker, 27, stood in his partially damaged restaurant as he recalled how he made it out alive.

On May 10, it was targeted by an air strike, demolishing more than half of it. Baker rushed out when he received a warning, moments before it was hit.

“I have no idea how I will ever be compensated,” Baker told Al Jazeera. “I can’t afford rebuilding it, given the extent of the damage.”

The restaurant, opened in August last year, was one of the few in western Gaza that overlooked the Mediterranean.

In September, it was shut for three months due to coronavirus-related restrictions.

“More than 50 people worked here. They had families. Now, their livelihood is gone,” Baker said.

Last week, Palestinian officials said it would cost around $150m to rebuild the damage to industry, power and agriculture in the already impoverished enclave.

While the UN’s Central Emergency Response Fund said it released $18.5m for humanitarian efforts, several countries have promised to pour in millions of dollars in aid.

On Tuesday, Israel finally allowed the opening of the Karam Abu Salem (Kerem Shalom in Hebrew) crossing for some of the aid to go through.

The crossing is the main passageway that transfers necessities to Gaza’s nearly two million residents, and is one of two passageways controlled by Israel.

The third, the Rafah crossing, is controlled by neighbouring Egypt.

Israel’s siege of Gaza has also stopped the flow of construction materials needed to rebuild much of the enclave’s infrastructure, which was damaged in the previous Israeli military campaigns of 2008, 2012 and 2014.

Construction materials only enter Gaza through the Karam Abu Salem crossing and must be cleared by layers of bureaucracy.

Additionally, money for reconstruction is channelled through the Ramallah-based Palestinian Authority’s (PA) ministry of finance, in conjunction with the UN office in Gaza.

Materials and building plans also require approval from the Coordinator of Government Activities in the Territories (COGAT), an Israeli military unit that is responsible for civilian matters in the occupied territories.

The conditions that have impeded reconstruction since the last round of violence in 2014 are still in place, Firas Masri, a political analyst, said.

“When reconstruction does begin in earnest, COGAT will inspect all materials serving both a civilian and military purpose, what they deem ‘dual-use materials’,” Masri told Al Jazeera.

These approvals are hard to obtain, and need to be accompanied by a list, including the names of people who have requested the construction material. 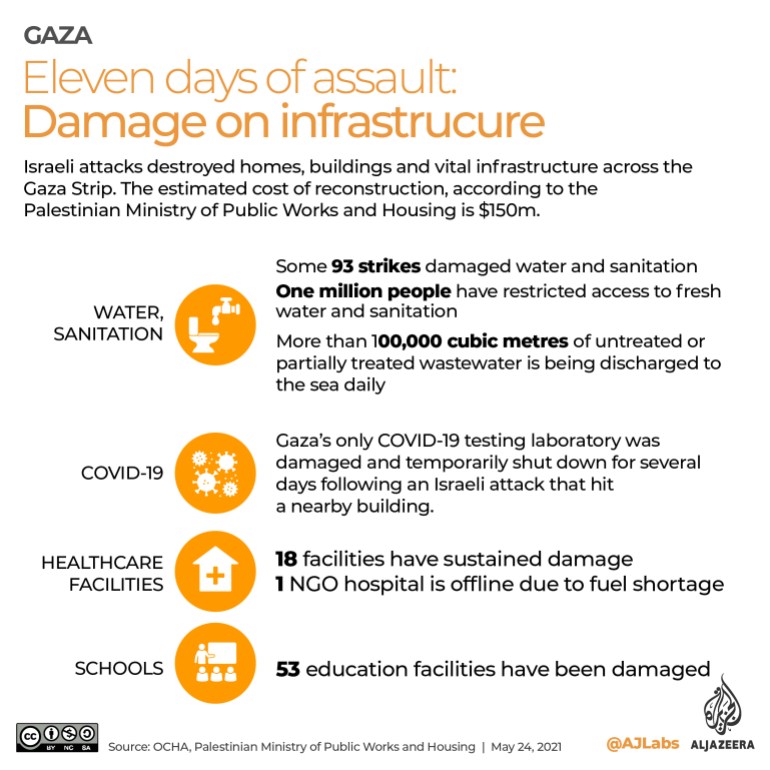 “It’s unclear whether or not COGAT will revive the 2014 Gaza Reconstruction Mechanism to inspect dual-use materials. But doing so will severely impede reconstruction efforts,” Masri said, referring to  a three-way agreement between the PA, the Israeli government, and the UN that has governed the reconstruction of Gaza since 2014.

Gaza-based companies already registered with COGAT’s approval system may get priority to import construction materials, but regardless of who brings in the material, the majority of the goods will likely come from Israeli industries, Firas said.

“As a result, Israel’s economy gets a financial benefit for the payments and the taxes it imposes on the goods upon entering Gaza.”

There are other “major obstacles” that will stand in the way of reconstruction in Gaza, according to Mohammed Abu Jayyab, a Gaza-based economist.

Major among them are conditions set by US President Joe Biden’s administration that will lead reconstruction efforts agreed on by the UN and Hamas’s rival, the Fatah-led PA.

Speaking in Jerusalem on Tuesday, US Secretary of State Antony Blinken promised to “rally international support” for Gaza, while also pledging “significant” US contributions.

Blinken made clear that Washington intended to ensure that Hamas, which it regards as a “terrorist” organisation, did not benefit from the aid.

“Hamas will undoubtedly reject any intervention or supervision by the PA, whether it is regarding the reconstruction itself, or as a mediator that may receive the funds needed for reconstruction,” Abu Jayyab said.

The two groups have been at loggerheads since Hamas took control of Gaza in 2007 after defeating PA President Mahmoud Abbas’s long-dominant Fatah party in parliamentary elections.

“There is clearly a severe level of miscommunication between authorities in Ramallah and in Gaza, especially in terms of agreeing on what the damages sustained are, and what programmes are needed to overcome this,” Abu Jayyab added.

Moreover, financial support may also be a heavily politicised process, where funds from certain countries may be tied to political conditions.

Aby Jayyab added that some Arab countries may provide funding hoping to gain an “important role in the region”.

Regardless of the coming challenges, Matar and Baker remain hopeful that Gaza’s skyline will one day be restored.

“We all hope for things to be as they once were,” Matar said. “It’s just a matter of time.”