Authorities in the Democratic Republic of Congo have urged residents of the eastern city of Goma to evacuate after a volcano overlooking the area erupted.

Lava from Mount Nyiragongo approached Goma’s airport late on Saturday, as thousands of residents carrying mattresses and other belongings fled the border city on foot – many towards the frontier with Rwanda. The lava flow has now stopped after reaching Goma’s suburbs, AFP news agency reported.

It is one of the world’s most active volcanoes and is considered among the most dangerous.

“The evacuation plan for the city of Goma has been activated,” Communications Minister Patrick Muyaya tweeted late on Saturday. “The government is discussing the urgent measures to take at present.”

The plan was activated after an emergency meeting in Kinshasha, he added. 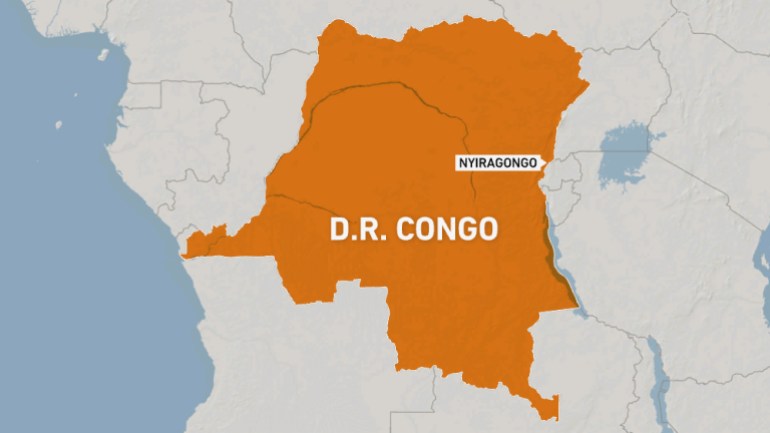 The presidency said President Felix Tshisekedi will cut short a trip to Europe to return to Congo on Sunday.

The military governor of North Kivu province, of which Goma is the capital, confirmed the eruption of the Nyiragongo volcano at around 7:00pm (17:00 GMT).

General Constant Ndima urged residents of Goma, a city of two million people that sits on Mount Nyiragongo’s southern flank and the north shore of Lake Kivu, to remain calm.

‘Goma is the target’

Earlier on Saturday, residents reported a strong smell of sulphur on the streets of the eastern town and a red glow filling up the sky above the city.

The lava initially flowed east towards Rwanda, said Dario Tedesco, a volcanologist based in Goma. But later in the night, new fractures opened in the volcano allowing lava to flow south towards Goma, he said.

“Now, Goma is the target,” Tedesco told the Reuters news agency. “It’s similar to 2002. I think that the lava is going towards the city centre.”

“It might stop before or go on. It’s difficult to forecast,” he said.

INSO, which coordinates safety for non-governmental organisations, said in a note that the lava had cut off a main road that runs north from Goma.

“The situation is deteriorating,” he said in a note, asking all residents near the airport to “evacuate without delay”. At this stage, he said, “the other districts of the city were not in danger” as the lava was unlikely to reach those areas.

On the streets of Goma, panic spread quickly.

The first departures from the city came even before the official confirmation of the eruption came. Power was out across much of the city on Saturday night and phone lines were busy, according to Reuters.

“We are panicked because we have just seen the entire city covered by a light that is not electricity or lamps,” said John Kilosho. “We don’t know what to do. We don’t even know how to behave. There is no information.”

Others fled to the city centre from villages and neighbourhoods threatened by lava on the northern outskirts.

“We looked at the sky and saw the red colour of the volcano,” said Richard Hazika Diouf from the Majengo neighbourhood.

“We have fled to seek shelter in town.”

Rwanda’s Ministry in Charge of Emergency Management said more than 3,500 Congolese have crossed the border.

Rwandan state media said they would be lodged in schools and places of worship.

Volcano watchers have been worried that the volcanic activity observed in the last five years at Nyiragongo mirrors that in the years preceding eruptions in 2002 and 1977.

Volcanologists at the OVG, which monitors Nyiragongo, have struggled to make basic checks on a regular basis since the World Bank cut funding amid embezzlement allegations.

In a bulletin on May 10, the observatory said there had been increased seismic activity at Nyiragongo earlier in the month.