Israel and Palestinian armed groups have agreed to a ceasefire, bringing an end to an 11-day assault that has killed more than 240 people.

Since 2008, Israel has waged four wars on the Palestinian territory, killing thousands of people, mostly civilians. During Israel’s latest offensive on Gaza, Israeli attacks damaged at least 51 education facilities, including 46 schools, two kindergartens, an UNRWA (The United Nations Relief and Works Agency for Palestine Refugees in the Near East) training centre, and parts of the Islamic University of Gaza, according to the United Nations’ latest humanitarian report.

At least 66,000 people are still sheltering in 58 UN-run schools across the Gaza Strip.

Israeli raids also damaged at least six hospitals and 11 primary healthcare centres, including Gaza’s only COVID-19 testing laboratory that was left inoperable following an Israeli attack that hit a nearby building on May 17.

Gaza’s electricity network also suffered damage, leading to 20-21 hours of daily power outages. This has affected water and sanitation facilities across the strip, leaving at least 250,000 people without access to drinking water.

Gaza has a population of about 2.1 million people living in five governorates – North Gaza, Gaza City, Deir al-Balah, Khan Yunis, and Rafah. Bordered by Israel and Egypt on the Mediterranean coast, the strip is about 365 square kilometres (141sq miles) – about the size of Cape Town, Detroit, or Lucknow. At only 41km (25 miles) long, it can take less than an hour to drive from Rafah in the south to Beit Hanoun in the north.

In the following series of maps, Al Jazeera takes you on a journey across Gaza’s five governorates highlighting key locations including hospitals, schools, universities, UN compounds, refugee camps, crossings and other vital infrastructure.

The district of North Gaza shares a 10km-long (six-mile-long) border with Israel. The Gaza Strip is surrounded by a heavily fortified perimeter consisting of a concrete wall and double-wired fencing. Anyone who steps within one kilometre (0.6 miles) of this barrier is in danger of being shot by the Israeli army, which patrols Gaza’s northern and eastern borders.

The Erez crossing, managed by the Israeli army, is Gaza’s only northern crossing into Israel. From there, Palestinians with special permits – usually for urgent medical treatment – are allowed to leave Gaza on their way to Jerusalem or the West Bank. Gaza is only a 100-km (60-mile) drive to Jerusalem but because of tight security measures, this journey can take several hours. Since 2007, Israel has imposed a sea and air blockade of Gaza.

North Gaza is home to the largest refugee camp in the Strip. The Jabalia refugee camp covers an area of 1.4sq km (0.5sq miles), and with a population of 114,000 people is one of the most densely populated places on Earth. 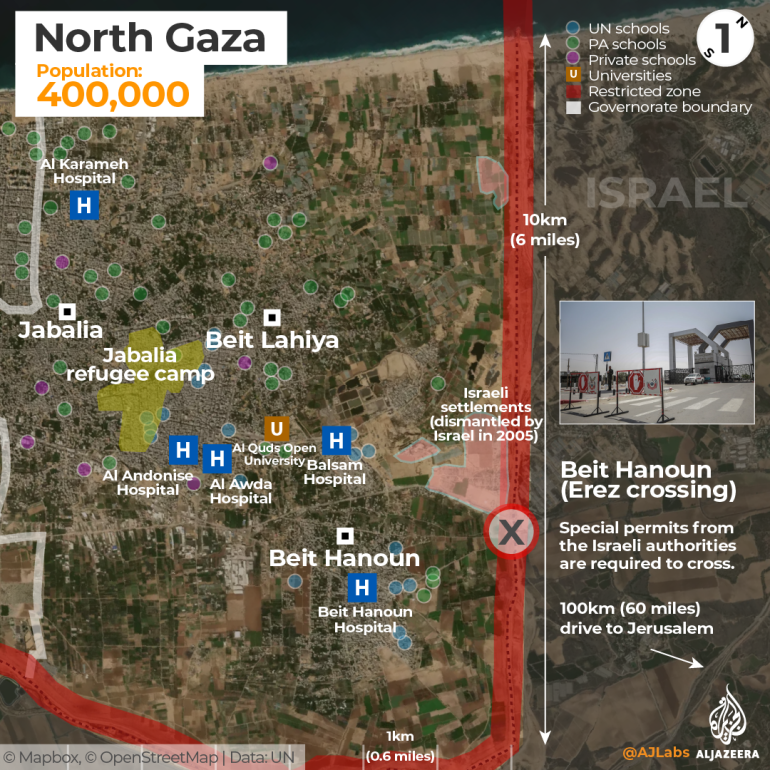 Gaza City is the largest and most populous city within the Gaza Strip, with about 700,000 residents. Rimal, Shujaiya and Tel al-Hawa are among its most well-known neighbourhoods.

At the heart of the Rimal neighbourhood is Al Shifa Hospital – the largest medical facility in the Gaza Strip. Intensive care units there are desperately overcrowded and are “having lots of difficulties in running equipment”, Gaza journalist Youmna al-Sayed reported on Thursday.

Surrounding the hospital are several UN compounds including UNRWA (The United Nations Relief and Works Agency for Palestine Refugees in the Near East), UNSCO (The office of the United Nations Special Coordinator for the Middle East Peace Process) and UNDP (UN Development Programme) compounds. Gaza’s top universities – including the Islamic University of Gaza, Al Azhar University and the Al Aqsa University, which are just a few hundred metres apart – are also located in the Rimal neighbourhood.

The Shati refugee camp, also known as Beach Camp, is located along Gaza’s Mediterranean coastline and is the third-largest out of the Gaza Strip’s eight camps. 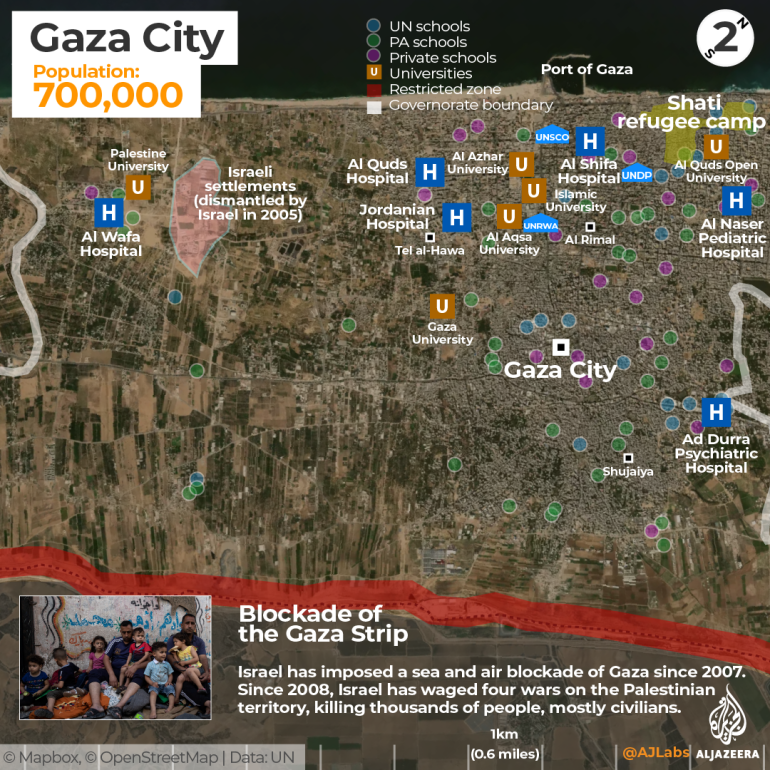 Named after the “Monastery of the Date Palm”, Deir el-Balah is one of Gaza’s largest agricultural producers. It is also home to four refugee camps; Nuseirat, Al Bureij, Al Maghazi and Deir el-Balah.

Gaza’s only operating power plant is located along the district’s boundary with Gaza City. For the past 10 years, the Gaza Strip has suffered from chronic electricity shortages, which have severely affected its ability to provide essential services including health, water and sanitation services, manufacturing and agriculture.

Only 5 percent of Gaza’s water is safe to drink and 68 percent of its population suffer from food insecurity, according to the UN. 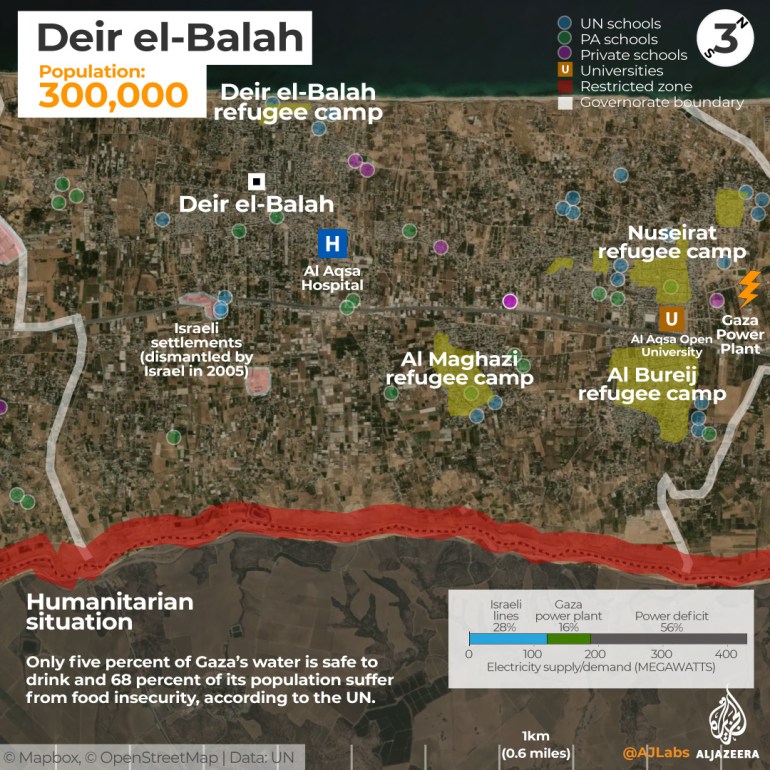 In 2005, nearly 8,000 Jewish settlers and Israeli troops living in 21 settlements around Gaza were relocated mostly to the occupied West Bank following a decision by then-Israeli Prime Minister Ariel Sharon to unilaterally disengage from the Gaza Strip. Most of these settlements were in Khan Yunis

Israel claimed its occupation of Gaza since 1967 has ended as it has pulled its troops and settlers from the territory but international law views Gaza as occupied territory because Israel has full control over Gaza’s borders, airspace and territorial waters. 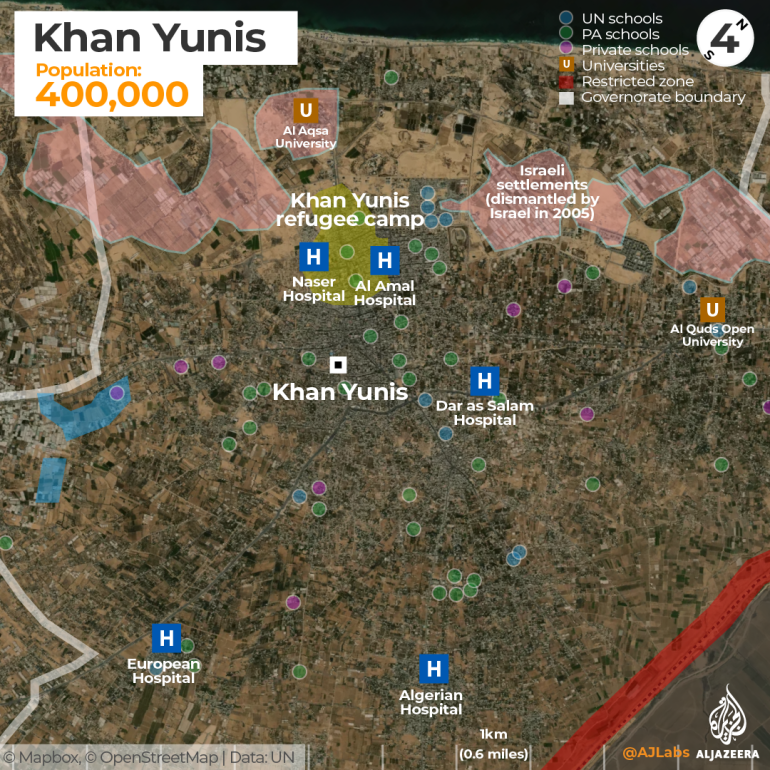 Rafah is the southernmost district of Gaza with a population of 250,000 people. The district is best known for the crossing with Egypt that bears its name.

In 2020, the Rafah crossing and the Erez crossing into Israel were only open for 125 days, according to the UN. Palestinians who wish to leave must apply for a limited number of passes to leave the Gaza Strip. This process may take weeks or months, depending on the status of the border.

Those who are able to get through the Rafah crossing must then make a six-to-eight-hour journey through the Sinai Desert passing several Egyptian checkpoints on their way to Cairo, 400km (250 miles) away. Rafah’s second crossing into Egypt is the Salah al-Din gate used for transporting goods.

The third crossing from Rafah is the Israeli-controlled Karem Abu Salem (Kerem Shalom) crossing. On May 18, it temporarily opened to allow the passage of humanitarian and commercial cargo. However, only five of the 24 permitted trucks were allowed through before it was prematurely closed.

Gaza has no functional airports after Israel bombed and demolished the Yasser Arafat International Airport in 2001, only three years after it opened.

Gaza again is the scene of widespread destruction and human suffering and remains the place often described as “the world’s largest open-air prison”. 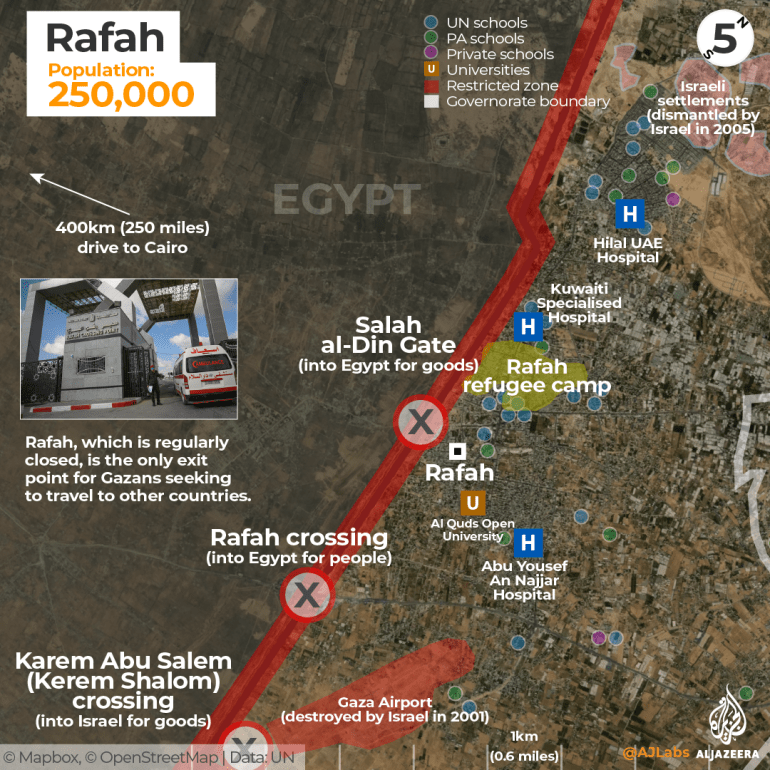