United States Senator and former Democratic presidential candidate Bernie Sanders has introduced a resolution to block a $735m arms sale to Israel amid the close US ally’s continuing bombardment of the Gaza Strip.

Sanders introduced the legislation on Thursday, in hopes of blocking the sale of Joint Direct Attack Munitions and Small Diameter Bombs.

It comes a day after Democrats in the House of Representatives introduced similar legislation after being notified of the sale on May 5.

“At a moment when US-made bombs are devastating Gaza, and killing women and children, we cannot simply let another huge arms sale go through without even a congressional debate,” Sanders said on Twitter.

At a moment when U.S.-made bombs are devastating Gaza, and killing women and children, we cannot simply let another huge arms sale go through without even a Congressional debate. https://t.co/nLoDFmLGr1

“I believe that the United States must help lead the way to a peaceful and prosperous future for both Israelis and Palestinians. We need to take a hard look at whether the sale of these weapons is actually helping do that, or whether it is simply fueling conflict.”

Support for Israel remains strong among US legislators, although a group of progressives have increasingly called for a more critical approach to the ally, to which the US provides about $3.8bn in virtually unconditional aid every year.

A growing number of more moderate Democrats and some Republicans have also joined calls for a ceasefire amid the continuing escalation, in which Israeli strikes have killed 230 Palestinians, including 65 children, in Gaza since May 10.

Twelve Israelis, including two children, have also been killed by rockets fired by armed groups in Gaza.

After days of silence, Biden voiced his support for a ceasefire on Monday in a call with Benjamin Netanyahu.

On Wednesday, Biden made his firmest statement to Netanyahu since the escalation began, telling him that he expected “a significant de-escalation today on the path to a ceasefire”.

Still, the Israeli leader after the call said he was “determined” to continue bombarding Gaza until Israel’s “aim is met”.

The US, meanwhile, has repeatedly blocked a United Nations Security Council joint statement calling for a ceasefire, with US envoy to the UN Linda Thomas-Greenfield saying the US does “not judge that a public pronouncement right now will help de-escalate”.

Once considered sacrosanct, US arms sales and military support to Israel have increasingly been publicly questioned by some legislators.

After introducing legislation to stop the most recent arms sale in the House, progressive representative Alexandria Ocasio-Cortez tweeted that the “US should not be rubber-stamping weapons sales to the Israeli government as they deploy our resources to target international media outlets, schools, hospitals, humanitarian missions and civilian sites for bombing.

“We have a responsibility to protect human rights,” she said. 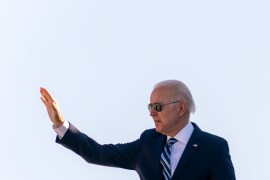 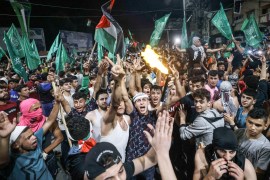 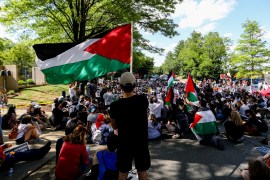 Are attitudes towards Palestine shifting in the US?

President Joe Biden faces calls from within his party to do more to end the current Palestinian-Israeli crisis.