In a bid to prevent more people’s arrival in Ceuta, Spain has upped security along its shared border with Morocco, fired tear gas into the buffer zone between the countries, and returned people who have managed to cross into its enclave in North Africa.

More than 8,000 people – mostly men, but also some women and children – entered Ceuta on Monday and Tuesday after swimming around a breakwater that extends into the Mediterranean Sea, or climbing over the border fence that separates the Spanish territory from Morocco.

More people arrived on Wednesday, although in far lower numbers, after both countries moved to stem crossings.

At least one person has died attempting to make the crossing, according to Spanish authorities.

Ceuta, with a population of 80,000, is on the northern tip of Morocco across from Gibraltar. 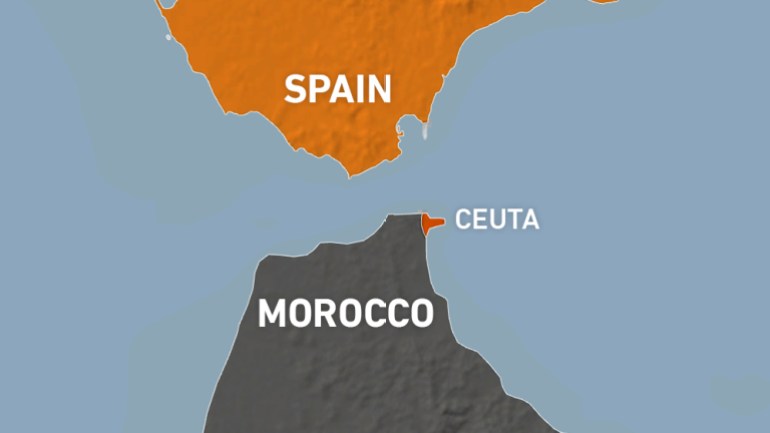 “We have never seen such an arrival of this magnitude,” said Red Cross spokeswoman Isa Brasero. “The city has the means to take care of all the people that arrive to its shores, but you never imagine that you will face this type of situation.”

On their side, Moroccan police on Wednesday drove hundreds of young men away from the border fence and stopped others from approaching.

Spanish Prime Minister Pedro Sanchez meanwhile promised to “restore order” after the unprecedented surge in arrivals, telling Parliament on Wednesday that about 4,800 migrants and refugees had already been sent back to Morocco.

Some of those who made the crossing were unaccompanied children, however, which Spanish law says must be taken into care by the country’s authorities.

But according to The Associated Press news agency, Spanish police ushered back some teenagers who appeared to be below 18.

‘A show of disrespect’

In his address to Parliament, delivered a day after he visited Ceuta, Sanchez criticised Moroccan officials for a “lack of border control” in comments that could escalate a diplomatic row between his government and Rabat.

“This is an act of defiance,” he said. “The lack of border control by Morocco is not a show of disrespect of Spain, but rather for the European Union.”

Meanwhile, Spanish Foreign Minister Arancha González Laya said for the first time in public that Madrid believes Morocco loosened its border control in retaliation against a decision by Spain last month to give medical assistance to a rebel leader from Western Sahara, a disputed territory held by Morocco.

Rabat had been angered by the assistance to Brahim Ghali, who heads the Polisario Front, an Algeria-backed breakaway movement that seeks to establish an independent state in the Western Sahara region.

“It tears our hearts out to see our neighbours sending children, even babies … [because] they reject a humanitarian gesture on our part,” González Laya told Spanish public radio.

As people continued to attempt to reach Ceuta on Wednesday, Spanish soldiers in combat gear and police officers patrolled the border, while swimmers were escorted back to Morocco.

Ceuta’s social services buckled as they attempted to respond to the simmering humanitarian crisis.

Hundreds spent the night in the streets, parks or on the hills bordering the city.

About 2,000 children were sent to warehouses run by charity groups.

AP journalists saw unaccompanied children sleeping on the floor of a warehouse, as well as in tent beds set up by the Red Cross.

Many shops were closed in Ceuta, a city of 20 square kilometres (7.7 square miles).

City head Juan Jesús Vivas, with the main opposition right-wing People’s Party, said school attendance dropped by 60 percent on Tuesday with families concerned for what he called “an invasion”.

Among the arrivals were sub-Saharan Africans, who often migrate to flee poverty or violence at home and saw the suddenly porous border as a chance to avoid an even more deadly sea journey to the Spanish mainland.

Aisha Diakaté, 25, fled conflict in Mali in 2018 after rebels killed her parents. She ended up in Morocco where she struggled to find work and had to beg to survive.

She walked from Tangier and then swam across the border with her small child in arms. Now, after sleeping outside a warehouse, she was crushed to hear that she could be deported.

“I swam here with my child, why are they now asking me to go? That’s not right,” Diakaté said.

“We have nothing. If we return to Morocco, it is just suffering.”

The developments came as Spain’s High Court on Wednesday served Ghali with a June 1 summons for a preliminary hearing in a war crimes case against him, a court document seen by Reuters news agency showed.

The summons is the first step towards a potential trial of the Polisario Front leader.

But Ghali, who is currently in hospital in northern Spain, declined to sign the summons, saying he had to refer to the Algerian embassy first, the document said.

Ghali and other leaders of the Polisario Front are accused by human rights groups and Western Sahara individuals of genocide, murder, terrorism, torture and disappearances, the document said.

Spain has previously said its decision to allow Ghali’s hospitalisation was a “humanitarian gesture”.