Muhammed Ishaq Hamid, 25, was critically wounded during the clashes and was pronounced dead upon arrival at a hospital in Ramallah.

Two Israeli soldiers were also reported to be injured by Palestinian gunfire.

The development came late on Tuesday during a general strike throughout the occupied West Bank to mourn the mounting carnage in Gaza as the death toll from Israeli air attacks reached 213 in the besieged enclave.

“My family is originally from Haifa but were driven out by the Israelis during the first Arab-Israeli war and were forced to flee abroad,” Randa, who took part in the demonstration with her children and grandchildren, told Al Jazeera.

“The situation is very miserable. Palestinians have the right to fight the occupation because Israel kills many of our people and drives people from their own land.”

Seven-year-old Ahmed Alian, from Jelazon camp near Ramallah, was dressed up in military uniform and holding a fake gun.

“We are here today because of the deaths in Gaza, especially those of children, and the situation in East Jerusalem,” his mother, Rana Alian, told Al Jazeera.

Two Palestinians were killed earlier in the day and more than 100 wounded throughout Tuesday.

Ubaidah Jawareh was killed by Israeli soldiers during clashes in the Aroub refugee camp north of East Jerusalem, while another Palestinian was shot dead in Hebron City by Israeli forces after they alleged he was armed with a knife and explosives and about to carry out an attack.

Throughout Tuesday, heavy clashes were also reported in other cities in the occupied West Bank, including Hebron, Bethlehem, Nablus, Beit El near Ramallah and Budrus.

Since Monday, at least 10 Israelis and two workers from Thailand were also killed in rocket attacks from Gaza. 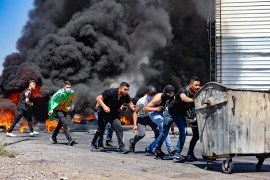 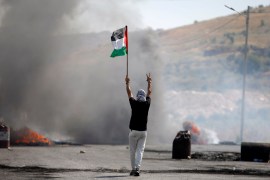 Hundreds of Palestinian demonstrators faced off with Israeli troops who shot and killed at least 11 people. 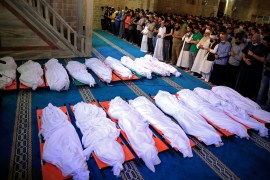