A third United Nations Security Council emergency meeting in a week – amid the deadly Israeli offensive in Gaza – has again ended with no concrete outcome after the United States blocked a joint statement calling for an immediate ceasefire between Israel and Hamas.

The meeting on Sunday came after the US reportedly twice blocked over the last week resolutions that would have condemned Israel’s military response and called for a ceasefire. Nearly 200 people, including 58 children, have been killed in the intense bombing of the besieged enclave of two million people.

Israel has justified its bombing campaign as a retaliation to rocket attacks by Hamas fighters. But the Gaza-based Hamas movement said its actions were a response to the Israeli policy of forced displacement of Palestinians in occupied East Jerusalem and the storming of Al-Aqsa Mosque by Israeli forces last week. Israel had missed a Hamas deadline to withdraw its forces from the mosque compound.

The latest round of inaction also comes as US President Joe Biden has given no signs of plans to step up public pressure on Israel, instead repeatedly stressing Israel’s right to defend itself.

Critics, including members of Biden’s party, have accused the administration of whitewashing Israeli strikes, which have killed at least 198 Palestinians in Gaza and wounded more than 1,000 others.

At least 10 Israelis, including two children, have been killed by rockets launched from Gaza since Monday.

US ambassador to the United Nations, Linda Thomas-Greenfield, told the emergency meeting that the US was “working tirelessly through diplomatic channels” to stop the fighting.

“The United States has made clear that we are prepared to lend our support and good offices should the parties seek a ceasefire,” she said.

Still, no joint statement emerged from the council, despite negotiations lead by Norway, China and Tunisia.

The US, China, France, Russia and United Kingdom are all permanent members of the security council, giving them veto power over joint statements. China had previously called out the US as being the sole dissenting voice on the issue.

On Monday, a senior Fatah official told Al Jazeera that they were disappointed with the US position.

“The positive and serious vibes in the recent Biden’s call to President Abbas did not reflect themselves on the US position at the UN Security Council last Tuesday,” Sabri Saidam, Fatah Central Committee member, told Al Jazeera, referencing the Saturday call between Biden and Palestinian president.

“Deeds not words is what’s needed!” he added.

Israel’s Ambassador to the UN, Gilad Erdan, in turn accused Hamas of carrying out indiscriminate attacks for political gain and putting its own civilians at risk.

On Sunday, Israeli President Benjamin Netanyahu said the Israeli air raids were continuing at “full-force” and would “take time”, adding he “wants to levy a heavy price” from Gaza’s Hamas rulers.

US Ambassador Thomas-Greenfield warned during the meeting that the return to armed conflict would only put a negotiated two-state solution to the decades-old conflict further out of reach.

However, the US has shown little willingness to diverge from its support of Israel.

In a phone call with Netanyahu on Saturday, Biden focused on civilian deaths from Hamas rockets. A White House readout of the call made no mention of the US urging Israel to join in a ceasefire that countries in the Middle East were pushing.

US Representative Adam Schiff, Democratic chairman of the House intelligence committee, urged Biden on Sunday to step up pressure on both sides to end the current fighting and revive talks to resolve Israel’s conflicts and flashpoints with the Palestinians.

“I think the administration needs to push harder on Israel and the Palestinian Authority to stop the violence, bring about a ceasefire, end these hostilities, and get back to a process of trying to resolve this longstanding conflict,” Schiff, a California Democrat, told CBS’s Face the Nation programme.

Meanwhile, a growing group of US senators on Sunday called for a ceasefire. Democratic Senator Chris Murphy and Republican Todd Young, the senior members of a foreign relations panel, said in a statement: “As a result of Hamas’ rocket attacks and Israel’s response, both sides must recognise that too many lives have been lost and must not escalate the conflict further.”

Prominent US progressive Alexandria Ocasio-Cortez has called Israel an “apartheid state” amid the continuing bombardment of the Gaza Strip.

“The devastation in Gaza is unconscionable. We must urge an immediate ceasefire. The killing of Palestinians and Israelis must end. We must also take a hard look at nearly $4 billion a year in military aid to Israel. It is illegal for US aid to support human rights violations,” he tweeted on Sunday. 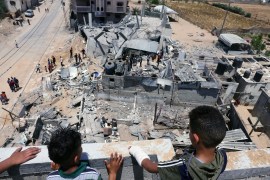 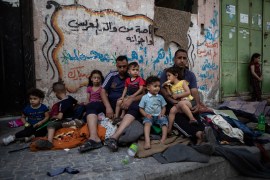 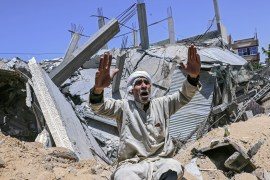 US statement following talks between Pakistani FM Qureshi and US Secretary of State Blinken makes no mention of Gaza.