Gaza City – When Mohammad Saad heard that an Israeli air strike had killed his cousin Reema Saad, he says the news hit the family “like a lightning bolt”.

Reema, 31, her husband Mohammed Telbani, 29, and their two children were in their apartment in Gaza City’s Tel al-Hawa neighbourhood in the early hours of Wednesday when an air strike hit the residential building, destroying their apartment.

Reema, who was four months pregnant, and five-year-old Zeid died immediately, and Mohammed later died in the intensive care unit, but the body of their daughter, three-year-old Maryam, has yet to be recovered from the site of the attack. Saad said the family did not receive any warning before the air raid.

“I’m communicating with the fire department and civil defence crews in Gaza to help us find Maryam and have her rest and be buried near her mother, who would have wanted that,” Saad said.

The day before the air attack had been a joyous one, with Reem visiting her family to congratulate her brother on his engagement. “The next day, she went home and was targeted,” Saad said.

The family is hiding the news of the killings from Mohammed Telbani’s mother, out of fear she may suffer from a heart attack.

Since Israel launched air raids on the besieged Gaza Strip late on Monday, Gaza’s health ministry says at least 113 people, including 31 children, have been killed, and 580 others have been wounded.

At least seven Israelis including a child have been killed in rocket attacks launched by armed groups in Gaza, which is ruled by the Palestinian group, Hamas.

The latest escalation in violence followed weeks of tensions in occupied East Jerusalem over a now-postponed court hearing relating to the forced expulsion of several Palestinian families from their homes in the Sheikh Jarrah neighbourhood.

Frictions in the city also spread to the Al-Aqsa Mosque compound, which Israeli forces raided on three consecutive days during the final week of Ramadan, firing tear gas and stun grenades at worshippers inside the mosque.

Hamas on Monday issued an ultimatum demanding Israel withdraw its forces from the compound, the third holiest site in Islam which is also revered by Jews.

Israel’s military says about 1,600 rockets have been fired from Gaza towards various locations in Israel since Monday.

Its spokesman Jonathan Conricus told reporters on Thursday that attacks on Gaza will continue as Israel prepares for “multiple scenarios”.

“We have ground units that are prepared and are in various stages of preparing ground operations,” he said. The Israeli defence minister, Benny Gantz, approved the mobilisation of 9,000 more reservist troops.

Thursday was the first day of Eid al-Fitr, a religious holiday for Muslims marking the end of the holy month of Ramadan. But instead of joyous celebrations and gatherings for families and friends, funerals were held as Hamas sent more rockets into Israel and Israeli fighter jets continued to hit the besieged enclave, including in Rafah, near the border with Egypt.

In Gaza City, the mourners carried the dead from Al-Omari Mosque on Thursday morning to the graveyard in the far east of the city. Throughout the procession, the sound of bombarding air strikes and rockets firing were heard almost constantly.

Due to the air raids, condolences for those killed were shared only by phone.

Responders continued to pull out bodies beneath rubble Thursday evening. The entire Al Tanani family including four children were recovered from the rubble of their house in Beit Lahia, in northern Gaza.

‘I hope they didn’t feel anything’

Some Palestinians have been sharing the news of their killed family members on social media, noting their status as civilians.

Take a look at israel’s targets: a civilian’s house.
They were murdered here.#GazaUnderAttack pic.twitter.com/Y7rclNWsNu

Bayan AbuSultan, 25, said her cousin Hadeel Arafa, 27, and her 50-year-old aunt, Miami, a mother of four, were killed while preparing for Eid in their house in the Amal neighbourhood of Khan Younis, when an Israeli air strike hit their home at about 3pm on Wednesday.

There was no prior warning of an imminent strike as Miami’s brother was on a call with her a few minutes before the bombing. AbuSultan said that she and Hadeel had been planning to go shopping together after Ramadan as she was supposed to get married a few days after Eid al-Fitr.

The last that she had heard from her cousin was when she shared her Facebook status, praying for those killed.

“Little did she know that soon after we’ll be wishing her exactly the same,” AbuSultan said. “I shiver every time I think of how terrified they were. I hope they didn’t feel anything.”

The Israeli air strikes have hit police headquarters and government buildings, three high-rise buildings, an ice cream factory in the east of Gaza and the Al-Salah school in Deir Al-Balah in the central Gaza Strip.

The Israeli military has said it only targets multi-storey buildings which are “military targets”. Other buildings it has struck are “strategically significant” sites belonging to Hamas, it said.

In a statement published on Tuesday, the Euro-Mediterranean Human Rights Monitor (EMHRM) said that Israel’s “widespread bombardment, including civilian objects without respecting the principle of proportionality … is utterly appalling”.

Israeli forces have “expanded their response to include targeting dozens of civilian objects, women and children and bombing densely populated gatherings, which according to the Rome Statute, is a war crime,” it said, adding that its targeting of civilian objects exceeds military necessities.

Even if there was a military necessity to target certain sites in #Gaza, it is the responsibility of #Israel as the occupying power to comply with the other provisions stipulated by international humanitarian law to avoid harming civilians.

In one of the air strikes, Israeli forces killed Amira Abdel Fattah Subuh, 58, and her son Abd al-Rahman Yusef Subuh, 19, a disabled young man who suffers from cerebral palsy, the group said.

While the Israeli army announced later that it targeted the home of a battalion commander, field investigations confirm that no one was in the targeted flat during the bombing, according to EMHRM.

“This incident is an example of  Israel’s bombing policy that does not consider the principle of proportionality. Israel targets civilian objects deliberately to inflict damage upon victims and leave them with material losses as a form of revenge and collective punishment, prohibited by the rules of international humanitarian law.” 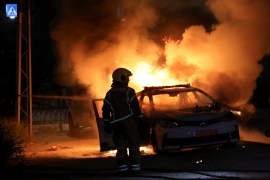 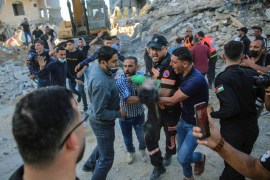 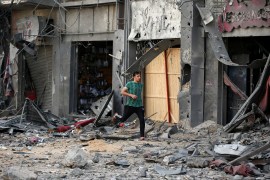 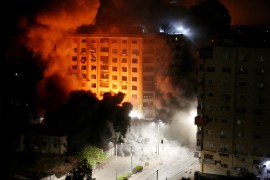 Israel struck three tower blocks in the heart of Gaza City in 24 hours, flattening two and destroying parts of another.