Armenia’s leader has accused Azerbaijani troops of crossing the southern border and trying to stake claim to territory in a new escalation of tensions between the regional foes.

He said their neighbour was trying to “lay siege” to Lake Sev Lich that is shared by the two countries.

“It is an encroachment on the sovereign territory of the Republic of Armenia,” Pashinyan said. “This is an act of subversive infiltration.”

He said Armenian soldiers had responded with “appropriate tactical manoeuvres” but stressed that the latest tensions should be settled through negotiations.

Armenia’s defence ministry said the Armenian side stopped Azerbaijan’s advance and forced its troops to return to their positions.

Azerbaijan’s foreign ministry dismissed the accusations late on Thursday, saying Azerbaijan was enforcing its own border and is committed to easing tensions in the region.

It called Armenia’s reaction to the developments “inadequate” and “provocative”, adding that Azerbaijan’s officials were was in talks with Armenian border guards.

“Measures to strengthen the border protection system implemented within the territorial integrity of Azerbaijan are carried out on the basis of maps available to each of the sides that define the border line between Armenia and Azerbaijan,” the Azerbaijani statement read.

“Since regaining its independence, there has been no state border between the two countries for obvious reasons, and for this reason we speak about the complicated technical process, which is currently accompanied by disagreements between the sides.”

Last year, Armenia and Azerbaijan went to war over the Nagorno-Karabakh region.

The six-week conflict claimed about 6,000 lives and ended after Armenia ceded swaths of territory it had controlled for decades.

The United States – one of the three nations in the so-called “Minsk Group” that leads diplomacy on Nagorno-Karabakh – said on Thursday it was “closely following” the rising tensions.

“We understand communication between the parties is ongoing and urge restraint in de-escalating the situation peacefully,” State Department spokesman Ned Price wrote on Twitter.

Pashinyan has been under tremendous pressure for his handling of the conflict. He resigned in April while staying on in a caretaker capacity, setting the stage for a June 20 parliamentary election aimed at defusing the political crisis at home.

Moscow brokered a peace deal between Armenia and Azerbaijan but tensions persist.

Last month, Yerevan and Baku traded accusations of opening fire in Karabakh and along their shared border.

Ethnic Armenians declared independence for Azerbaijan’s Nagorno-Karabakh region and seized control of the mountainous enclave in a brutal war in the 1990s that left tens of thousands dead and forced hundreds of thousands from their homes. 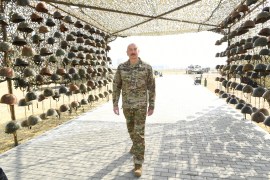 Baku showcases ‘park of trophies’ displaying the helmets of Armenian troops who died in Nagorno-Karabakh conflict. 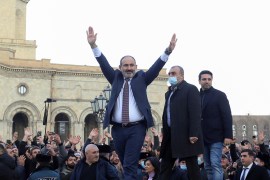 While blamed for defeat in the Nagorno-Karabakh conflict, Pashinyan has mended ties with Putin and could regain trust. 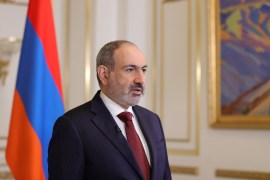 Nikol Pashinyan calls early election due to criticism over his handling of last year’s Nagorno-Karabakh conflict.