Violent confrontations between Palestinian citizens of Israel and Jewish Israelis have resumed in several cities inside Israel as the Israeli military continued air raids on the besieged Gaza Strip and Hamas fired rockets into Israel for a third day on Wednesday.

The crisis, which started with Israeli efforts to displace Palestinian families in occupied East Jerusalem, has sparked intra-communal tensions within Israel, with some Palestinian citizens staging protests in recent days.

Footage of the attack, which was aired live on television, showed a man being forcibly removed from his car and beaten by a crowd of dozens. Al Jazeera’s Harry Fawcett reported that it “looked like an attempted public lynching”.

Video footage on local media also showed dozens of people with black masks ransacking Palestinian stores, with reports saying the Jewish ultra-nationalist attackers had responded to a call issued on social networks by a group known as La Familia. 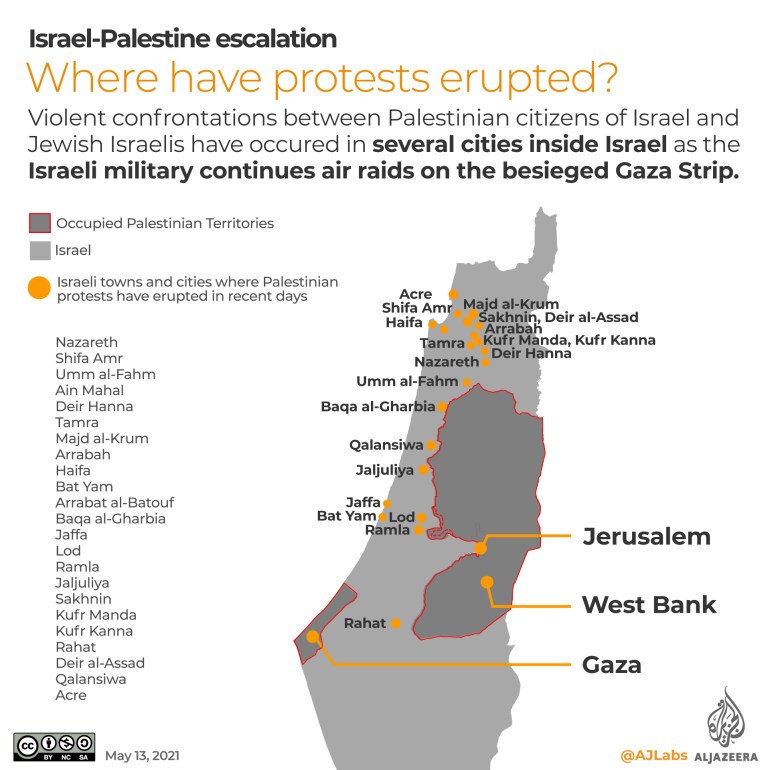 Elsewhere, a video uploaded to social media appeared to show a crowd of flag-waving Israelis attacking a car in the northern city of Tiberias. Israel’s Channel 13 also quoted a senior police officer as saying Palestinian citizens of Israel were suspected of attacking and seriously wounding a Jewish man in Acre, also in the country’s north.

Meanwhile, after a synagogue was torched in Lod, a city some 15km (9.3 miles) from Tel Aviv, Israeli authorities deployed border police and announced a curfew.

“We must not be dragged into provocations and inflicting harm on people or property,” Chief Rabbi Yitzhak Yosef said in a rare public appeal. “The Torah of Israel grants no licence for taking the law into one’s hands and acting violently.”

Palestinian citizens of Israel say the violence of the past two days was not directed at Jews, but rather at religious nationalists with close ties to the Jewish settlement movement who have moved into mixed areas in recent years, pushing Palestinian residents out.

“All across the country, we’ve seen these similar images of Jews and Arabs facing off in the streets,” Al Jazeera’s Fawcett said about the recent confrontations.

“This is a parallel and extremely concerning development for the [Israeli] government, even as it continues to conduct this extensive and accelerating military operation in and around Gaza,” he reported.

Tensions have soared in recent weeks in anticipation of a court ruling on planned forced expulsions of several Palestinian families from their homes in the occupied East Jerusalem neighbourhood of Sheikh Jarrah. The ruling has been postponed.

Violence escalated on Monday after Hamas issued an ultimatum demanding Israel stand down its security forces from the compound. Shortly after the deadline, the Palestinian group, which rules Gaza, fired several rockets towards Jerusalem and later, Israel launched air attacks on the territory.

After police broke up a protest on Monday night in Lod, a young Palestinian resident was shot and killed by a Jewish-Israeli resident. Violence later broke out a day later at the man’s funeral – and spread to other communities inside Israel, including Ramle.

Meanwhile, Israeli Prime Minister Benjamin Netanyahu this week visited Lod and Acre, where he pledged to “stop the anarchy” and restore order “with an iron fist if needed”.

Netanyahu on Tuesday evening authorised the deployment of hundreds of police to Lod and other areas, including paramilitary border police who usually operate in the occupied West Bank.

Palestinian citizens of Israel make up about 20 percent of the country’s population.

While they hold citizenship and have the right to vote, they face widespread discrimination and limited civil, political and socio-economic rights. Many Palestinian communities inside Israel also are under-funded and marginalised.

Ghassan Munayyer, a Lod-based activist, said the veneer of coexistence conceals deeper disparities, including in housing and infrastructure. He compared the city’s Palestinian neighbourhoods to “refugee camps”.

“The Jews love saying there’s co-existence. They go out to eat in an Arab restaurant and they call it coexistence,” he said. “But they don’t see Arabs as equal human beings who have rights that they have to respect.”