By Mohammed Hussein and Alia Chughtai

Medical oxygen has become one of the most important life-saving commodities in the fight against COVID-19 during which patients develop pneumonia and hypoxaemia – a low blood oxygen level.

Dozens of COVID-19 patients in India have died due to the acute shortage of oxygen, bringing the production and supply of this critical medical item into the global spotlight.

When is medical oxygen used? How is it administered? Which countries produce the most of it? And how is it produced? We answer these questions in four graphics.

The impact of COVID-19 on the lungs

The Sars CoV-2 virus in many cases targets the respiratory system, leading to an inflammation of the lungs. In severe cases, this may lead to hypoxaemia, which is the leading cause of death among COVID-19 patients.

A blood oxygen saturation level (SpO2) above 95 percent is a healthy range for children and adults. Oxygen saturation levels below 90 percent are considered dangerous. According to the World Health Organisation (WHO), about 20 percent of COVID patients will require oxygen therapy to prevent respiratory failure. 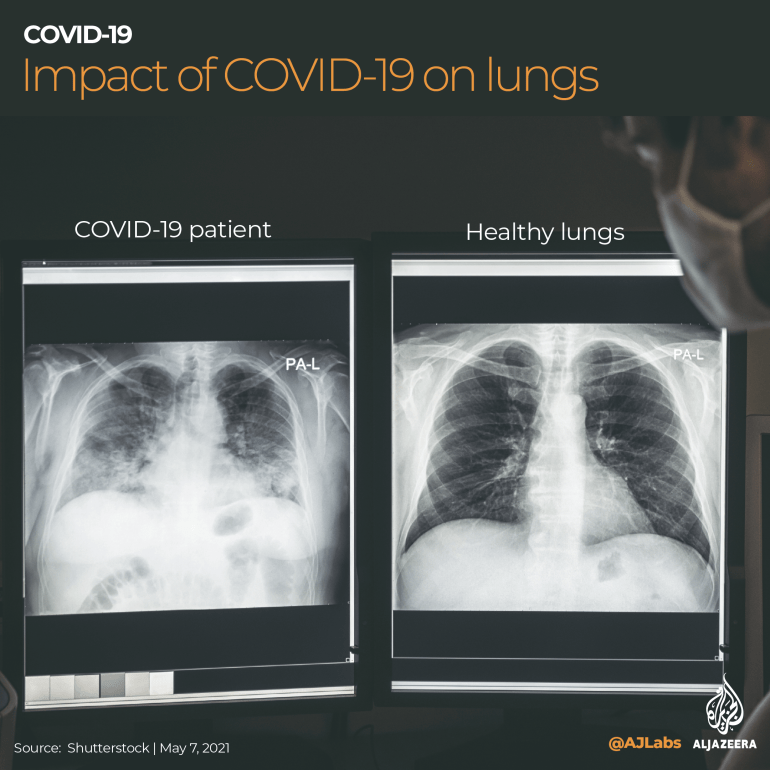 Oxygen can be administered in a variety of ways. For low to moderate oxygen deficiencies, patients can be put on either a nasal cannula – a medical tube that goes through both nostrils – or on a simple or reservoir face mask. In these cases, one to 15 litres (3.3 gallons) of oxygen per minute is delivered to supplement a patient’s regular breathing.

If higher volumes of oxygen are required, patients may then be placed on a high-flow nasal cannula, a Continuous Positive Airway Pressure (CPAP) machine, or a ventilator. In these cases, up to 100 percent of the oxygen a person inhales comes from the oxygen cylinder. In the case of a ventilator, a continuous supply of oxygen may be required to keep a patient alive. 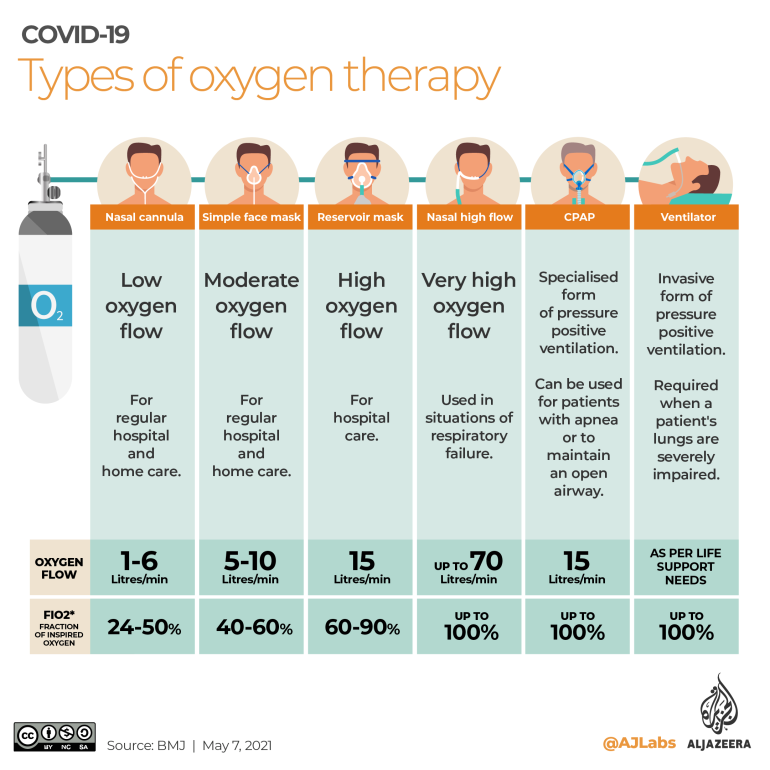 Where does medical oxygen come from?

Several countries, particularly those with low to middle incomes, are facing oxygen shortages. In India, which has seen a record number of cases in the past several weeks, an estimated 17 million cubic metres (600 million cubic feet) of oxygen is required daily.

According to the Indian Ministry of Health, only about seven million cubic metres of oxygen is being produced. This shortfall has meant that thousands of people in critical need of oxygen have been turned away and have died as a result.

In 2019, according to the World Bank, out of 102 countries that are part of the medical oxygen export-import trading chain, 10 countries exported up to 80 percent. Belgium was the leading net exporter at $23.6m, followed by France with 14 percent, then Portugal with 8 percent. 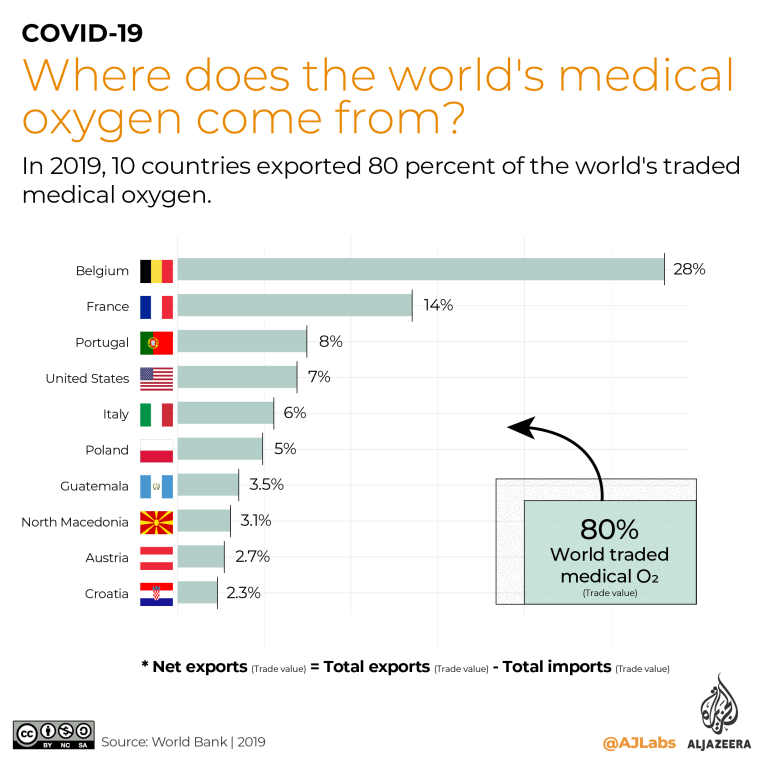 How is medical oxygen produced?

The air we breathe is about 78 percent nitrogen, 21 percent oxygen and 1 percent other gases, including carbon dioxide. Medical oxygen is at least 82-percent pure oxygen and is produced at industrial facilities before being delivered to hospitals in pressurised gas cylinders or in liquid form in large tanks. Over the past 30 years, most medical oxygen has been produced using the economical Pressure Swing Absorption (PSA) process which consists of three main phases:

Pressurisation: Air from the atmosphere is compressed and stored in a high-pressure vessel.

Adsorption: Air passes through molecular sieves where the nitrogen is absorbed by aluminium and silicon compounds known as zeolite. The remaining air is sent through an air buffer tank.

Depressurisation: Air passes through alternating tanks in a series of cycles to remove unwanted gases. The resulting gas is up to 96-percent pure oxygen. This oxygen is stored in a tank and can then be delivered in oxygen cylinders. 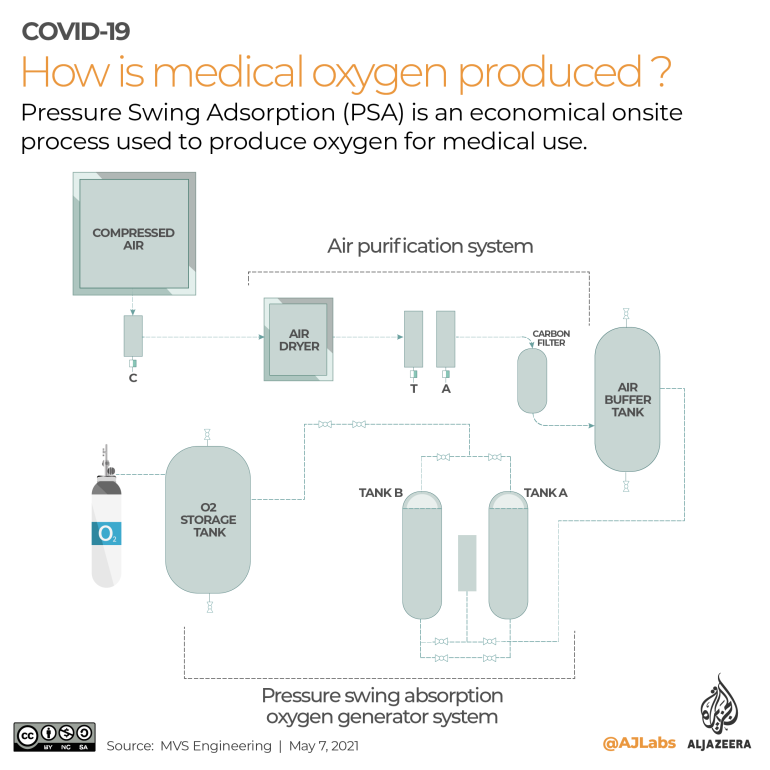