Avhad works as a telephone operator in one of the 24 COVID response “war rooms” in India’s financial capital Mumbai, home to more than 12.5 million people, in the western state of Maharashtra.

As the city was swept by a raging second wave of the virus and cases peaked in April, Avhad remembers handling more than 100 calls a day during his eight-hour shift.

“Every second call would be a distress call,” said Avhad, a civil engineer who became a telephone operator after losing his job in the pandemic.

Coronavirus cases in Mumbai, Maharashtra’s pandemic epicentre, started to peak in February this year. On April 4, the city counted its highest single-day surge of 11,206 new cases.

As cases spiked, hospitals in the city reported shortages of medical oxygen, patients struggled to find beds, and social media was flooded with calls for help.

The “war rooms” – control centres where doctors, medical interns and professionals such as Avhad track hospital beds on a live tracker and allot them to patients, many with depleting oxygen saturation – were at a breaking point.

Over the past 10 days, however, the metropolis has been recording a decline in infections. On Sunday, the city reported 2,395 positive cases, a drop from an average of 7,786 daily cases reported during the month of April.

The city’s COVID war rooms offer a glimpse into the improving situation.

“The panic calls for oxygen beds and ICU beds have reduced considerably,” said Avhad. “Now, we are largely dealing with vaccination-related queries.”

Last week, India’s Supreme Court applauded the management of medical oxygen in Mumbai and recommended that the capital New Delhi replicate the “Mumbai model” to fight the pandemic.

“The Bombay Municipal Corporation is doing some great work, with no disrespect to Delhi. What they are doing, how they are managing, we can learn from them,” the top court said.

So what exactly did Mumbai do differently to manage the oxygen crisis better?

“Our crisis teams networked with hospitals and moved around surplus oxygen from one place to another that was struck by a shortage. We found some hospitals admitting patients beyond their oxygen capacity. They were advised not to do so.”

The city’s civic body installed nearly 24 Liquid Medical Oxygen (LMO) tanks in its COVID-19 facilities, half of which remained unused during the first wave. But this infrastructure came in handy when the second wave hit the city.

During the first wave of coronavirus last year, Mumbai’s oxygen requirement was approximately 210 metric tonnes. It rose to 270 metric tonnes during the peak of the second wave when the city’s active cases hovered between 80,000 and 89,000.

At one point, 168 patients admitted in civic-run hospitals had to be moved to other field hospitals due to oxygen shortages. Many private hospitals also moved patients and limited their admissions.

When Chahal found that oxygen allotted to the city was being diverted to other places, he deputed teams to track oxygen tankers and stationed staff at oxygen cylinder refilling stations.

The city’s model also hinged on the rational use of oxygen and conserving supplies. Hospitals were asked to plug leakages, if any.

The Maharashtra COVID-19 task force recommended stopping the use of High Flow Nasal Oxygen machines that use more oxygen and advised the use of non-invasive ventilation instead.

Mumbai’s active cases have now dropped to 51,165 and the city’s oxygen consumption is about 240 metric tonnes.

Compare this with the situation in New Delhi. On Saturday, the national capital had 87,907 active cases and an available supply of 499 metric tonnes of oxygen in spite of it requesting 700.

Mumbai managed with 270 metric tonnes of oxygen when its active caseload was the same as New Delhi in mid-April. Officials from the Delhi government are now interacting with the civic officials in Mumbai to learn from their experience.

But Chahal said the “Mumbai model” is “not just about oxygen management” but a combination of multiple initiatives that were undertaken since the pandemic hit.

“We could cope with the second wave better because of the systems that were brought in place during the first wave,” he told Al Jazeera.

“It was like creating 24 mini-Mumbai cities. The decentralisation brought ease and efficiency to our functioning,” he said.

The city’s large field hospitals, known as jumbo facilities, that were built last year took a considerable patient load. In addition to the beds in public hospitals, the civic body took more than 80 percent of the beds in private hospitals and allotted them to patients through its war rooms.

The allotment of hospital beds was centralised through the war rooms in order to ensure better triage.

Chahal credits another of his bold decisions – issuing a tender to procure the antiviral drug remdesivir at 300 percent of its cost – with helping to lower cases in Mumbai.

Initially developed for treating Ebola, remdesivir, which is given in an injection form, was repurposed for treating COVID-19. As the caseload increased in India, it was hit by a severe shortage of the drug, leading to SOS calls on social media and black marketing.

“I went ahead with the expensive order because I had to save human lives,” said Chahal.

In anticipation of a third COVID-19 wave, Mumbai has commissioned three more field hospitals. The city administration has also announced that all its hospitals will have their own oxygen generation plants that produce medical-grade oxygen from atmospheric air.

“Our focus is now on creating more oxygen and ICU beds,” said Mumbai’s Additional Municipal Commissioner Suresh Kakani, adding that the lessons learned from the second wave have shown the importance of both.

“It’s hard to compare two distinct cities,” said epidemiologist Dr Jayaprakash Muliyil. “The virus has its own schedule. There will be a difference in the timing of the epidemic. Lockdown restrictions quiet down the virus for the moment, but it will resurface.”

Muliyil said India has to learn its lessons and prepare for the next wave.

“Mumbai is a good example to go by. Its terrific health administration and infrastructure made it possible for them. We did not see any gory pictures coming out from Mumbai.” 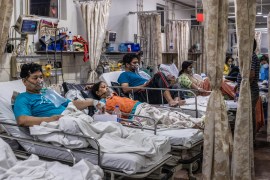 India sees 366,161 new infections and 3,754 deaths, off a little from recent peaks, amid calls for nationwide shutdown. 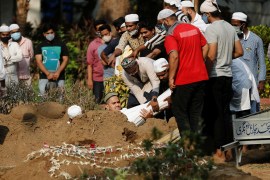 As India records highest daily deaths, Sayyed Munir Kamruddin says he and his colleagues are working around the clock. 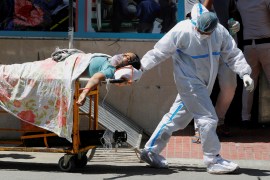 The medical journal said the government of PM Modi needs to ‘own up to its mistakes’ and work to control the virus. 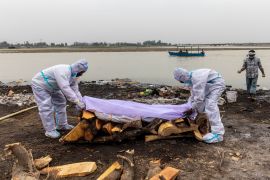