Indonesian authorities have arrested Papuan independence leader Victor Yeimo, a police spokesman said, over accusations that he orchestrated some of the most serious civil unrest in decades in 2019.

Yeimo, who is the international spokesman of the West Papua National Committee, was arrested in the provincial capital of Jayapura on Sunday and is being questioned, Iqbal Alqudusy told the Reuters news agency on Monday.

Police accuse the 38-year-old of being the “mastermind” behind protests that broke out in 2019 and of committing treason, as well as inciting violence and social unrest, insulting the national flag and anthem, and carrying weapons without a permit.

Extremely concerned about detention of #WestPapua pro-independence activist Victor Yeimo. He is at risk of torture or ill-treatment by the Indonesian security forces and must be given access to legal representation immediatelyhttps://t.co/zDppHpTc3R pic.twitter.com/xKLqa0P2BM

Victor Yeimo, a key peaceful grassroot leader who had been in hiding, was just arrested. He is wanted for treason over his role in the 2019 West Papua Uprising. pic.twitter.com/bQHR1aQGq4

His arrest came amid rising tensions in Indonesia’s easternmost provinces, with President Joko Widodo calling for a crackdown after a senior intelligence figure was shot dead late last month.

Emanuel Gobay, one of a group of Papuan lawyers representing Yeimo, said his client had not yet been officially charged.

Treason can carry a sentence of life in jail.

Protests convulsed Indonesia’s provinces of Papua and West Papua, on the island of New Guinea – collectively known as Papua – for several weeks in August 2019.

The sometimes violent unrest erupted after a mob taunted Papuan students in Surabaya, Indonesia’s second city on the island of Java, with racial epithets, calling them “monkeys”, over accusations they had desecrated a national flag.

The 2019 protests also spurred calls for independence from Indonesia.

Papuan separatists have pushed for independence for decades, saying a 1969 vote overseen by the United Nations that brought the region under Indonesian control was illegitimate.

In a development that has alarmed rights activists, Indonesia’s chief security minister has announced that armed Papuan separatists can be legally designated “terrorists”, and prosecuted under the counterterrorism law.

“Since the news broke that he was arrested, many West Papuans have already announced that they will take to the streets to demand his release,” she said. 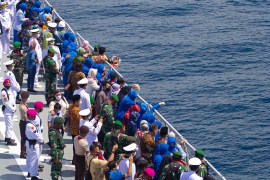 Indonesia says it will salvage submarine that sank off Bali

Grieving relatives cast flowers into the sea to pay their respects to the 53 crew members killed in the disaster. 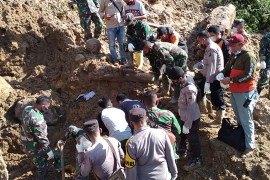 At least three killed in landslides on Indonesia’s Sumatra island

Fears that death toll could rise after heavy rains pounded the area in North Sumatra on Thursday evening. 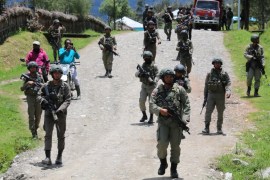 The general was killed during a shoot-out after rebels opened fire at a patrolling unit in the Papuan highlands. 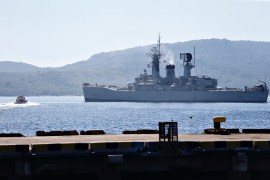 A scan detected the submarine at 850 metres deep – well beyond its survivable limits.