Iran has released a South Korean-flagged tanker it seized and the vessel’s captain amid a dispute over billions in frozen oil funds.

The Islamic Revolutionary Guard Corps seized the Hankuk Chemi in January but the South’s foreign ministry said in a statement on Friday that its detention had been lifted and “the ship departed safely today”.

The ship, with its captain and 12 other crew members on board, left the Iranian port at approximately 6am (013:0 GMT), the South Korean foreign ministry added.

The crew members have stayed on the ship for maintenance purposes, although earlier reports said that the crew had been allowed to leave Iran as early as February.

Iran’s foreign ministry also confirmed the released, saying the prosecutor that had ordered the detention of the vessel granted its captain and the South Korean government’s request to release it after judicial investigations were completed.

The release came amid speculation that Seoul and Tehran are making progress in addressing Iran’s call to unlock its funds of $7bn frozen in South Korea under United States sanctions.

World powers and Iran are also currently engaged in talks in Vienna to revive the nuclear deal, which the US abandoned during the previous administration of former President Donald Trump.

The Hankuk Chemi incident was the first seizure of a big vessel by Iran’s naval forces in more than a year.

The vessel, which was led to Bandar Abbas after being seized, was said to be carrying 7,200 tonnes of ethanol, according to the IRGC Navy.

In December, the governor of the Central Bank of Iran said Tehran has $7bn locked away in South Korea. Iranian Foreign Minister Javad Zarif was later quoted as saying that the amount is closer to $10bn.

Iran has for months been trying to use the money to buy COVID-19 vaccines from COVAX, a global vaccine effort operating under the World Health Organization.

The US imposed harsh economic sanctions on Iran after Trump, in May 2018, unilaterally withdrew from Iran’s 2015 nuclear deal with world powers.

In July 2019, the IRGC seized the British-flagged oil tanker Stena Impero in the Strait of Hormuz for allegedly ramming a fishing boat. They released it two months later.

The IRGC seized at least six other ships in 2019 over alleged fuel smuggling. 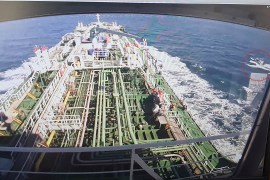 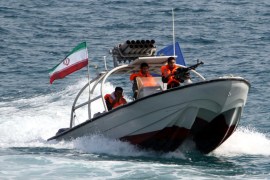 The vessel, which was led to Bandar Abbas after being seized, was said to be carrying 7,200 tonnes of ethanol.

South Korea’s move comes after the US reversed two Trump-era moves against Iran.