The department said reports on Russian movements bordering eastern Ukraine, which have become the latest point of tension in icy US-Russian relations less than three months after US President Joe Biden took office, were “credible”.

Speaking during a press briefing on Monday, State Department spokesman Ned Price said the US would be concerned by any effort by Moscow to intimidate Ukraine whether it occurred on Russian territory or within Ukraine.

The department said it is ready to engage on the situation.

“We’ve asked Russia for an explanation of these provocations,” Price said.

“But more importantly, what we have signaled with our Ukrainian partners is a message of reassurance.”

The comments followed a telephone call on Friday in which Biden reassured his Ukrainian counterpart, Volodymyr Zelenskyy, of “unwavering support” in Ukraine’s confrontation with Russia-backed separatists holding parts of the eastern Donbas region.

Russia on Monday denied that Russian military movements posed a threat to Ukraine and dismissed fears of an expansion even as it warned that it would respond to new Ukrainian sanctions against Russian companies.

Last week, the NATO alliance also expressed concern over what is said was a large Russian military buildup on Russia’s side of the border with eastern Ukraine.

For his part, Zelenskyy has accused Russia of whipping up tensions.

“Muscle-flexing in the form of military exercises and possible provocations along the border is a traditional Russian affair,” the Ukrainian president said in a statement on April 1.

Ukraine, Western countries and NATO accuse Russia of sending troops and heavy weapons to prop up its proxies in Donbas in 2014.

Moscow has said it only provides political and humanitarian support to separatist fighters in what it casts as an internal conflict.

Kremlin spokesman Dmitry Peskov played down the military enlargement last week, saying “it poses no threat to anyone” and that Russia was taking measures to ensure the security of its own borders.

“There is increased activity on the perimeter of Russia’s borders by NATO, other alliances, individual countries – it all obliges us to be vigilant,” he said. 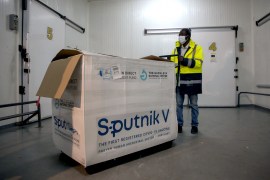 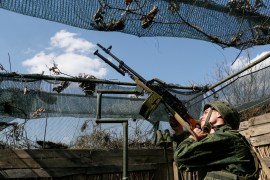 Russia to investigate reported killing of child in Ukraine attack

Russian investigators say a five-year-old child was killed during an assault by Ukrainian government forces. 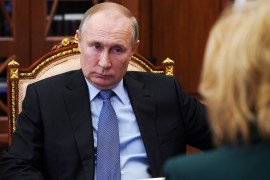 The legislation allows the 68-year-old Russian president the possibility to stay in power until 2036.