Minneapolis Police Chief Medaria Arradondo has testified in Derek Chauvin’s murder trial that the former officer did not act within the police department’s policies and ethics when he placed his knee on Black American man George Floyd’s neck for more than nine minutes.

“Clearly, when Mr Floyd was no longer responsive, and even motionless – to continue to apply that level of force to a person, proned-out, handcuffed behind their back – that in no way shape or form is anything that is by [the] policy,” Arradondo told the court on Monday.

Arradondo’s testimony came on the sixth day of testimony in the trial of Chauvin, who has been charged with murder and manslaughter in the death of Floyd, who was unarmed in May of last year.

Video footage of Chauvin kneeling on Floyd’s neck sparked a nationwide movement for racial justice and an end to police violence against Black people and other people of colour.

Prosecutors on Monday continued to present testimony that the likely cause of Floyd’s death was asphyxiation, or choking, as a result of Chauvin placing his knee on his neck.

In the first week of the trial, prosecutors called 19 people to testify, including 10 who were witnesses at the scene, as well as Floyd’s girlfriend, and paramedics and firefighters who tried unsuccessfully to revive him.

Over three-and-a-half hours of testimony on Monday, Arradondo backed Zimmerman’s assessment and said he “vehemently” disagreed that Chauvin made the appropriate use of force during Floyd’s arrest.

He said officers are trained to treat people with dignity and are sworn to uphold the “sanctity of life”. They are trained in basic first aid and given annual refresher courses, be it in tying a tourniquet to a bleeding gunshot victim or using a naloxone inhaler to reverse an opioid overdose.

Chauvin failed to follow his training in several respects, Arradondo said. He could tell from Floyd’s grimaces that Chauvin was using more than the maximum “light-to-moderate” pressure an officer is allowed to use on someone’s neck.

The officer did not relent in using deadly force even as Floyd fell unconscious and he did not provide the mandated first aid to a dying Floyd, Arradondo said.

“It’s contrary to our training to indefinitely place your knee on a prone, handcuffed individual for an indefinite period of time,” he said.

Al Jazeera’s John Hendren, reporting from Minneapolis, said Monday that Arradondo essentially broke “the blue wall of silence” among police, who typically do not testify against each other.

“He said that that hold was not approved, that it was absolutely not part of police training,” Hendren said. “This police chief was very clear in saying in every step, Derek Chauvin violated police policy, committed excessive force.”

Chauvin, 45, is charged with murder and manslaughter in Floyd’s death May 25. The white officer, a 19-year-veteran of the police force – is accused of pressing his knee into the 46-year-old man’s neck for nine minutes, 29 seconds, outside a corner store where Floyd had been arrested on suspicion of trying to pass a counterfeit $20 bill for a pack of cigarettes.

Before he was pinned to the ground, a frantic Floyd struggled with police who were trying to put him in a squad car, saying he was claustrophobic.

Officers kept restraining Floyd – with Chauvin kneeling on his neck, another kneeling on Floyd’s back and a third holding his feet – until the ambulance got there, even after he became unresponsive, according to testimony and video footage. The officers also rebuffed offers of help from an off-duty Minneapolis firefighter who wanted to administer aid or tell officers how to do it.

The defense has argued that Chauvin did what he was trained to do and that Floyd’s use of illegal drugs and his underlying health conditions caused his death.

In cross-examination, Eric Nelson, Chauvin’s lead lawyer, began with getting Arradondo to say it had been “many years” since he himself had made an arrest. “I’m not trying to be dismissive,” Nelson said.

He also had Arradondo agree with him that a police officer’s use of force is often “not attractive”.

Debbie Hines, a former Washington, DC prosecutor, told Al Jazeera that Arradondo in his testimony had “painted a picture of what the police force should be about”.

“And that’s what this case is about – what should be done and not what often happens. And he stated that police officers have a duty of care to the suspect that they arrest. And that duty is to render aid where aid is necessary – and Chauvin didn’t show the least bit of concern there.”

She added, “The police chief also talked about the sanctity of human life. And that’s very important. Because that’s what is in contrast to what we are seeing – that Derek Chauvin showed no regard for human life with respect to George Floyd.”

Earlier in the day, an emergency room doctor who pronounced Floyd dead after trying to resuscitate him testified that he believed at the time that Floyd most likely had died of suffocation, the Associated Press news agency reported.

Dr Bradford Langenfeld, who was on duty at the Hennepin County Medical Center the day Floyd died, said Floyd’s heart had stopped by the time he arrived at the hospital.

He said paramedics told him they had already tried to revive him for about 30 minutes.

Asphyxiation was “more likely than the other possibilities” as to Floyd’s cause of death, Langenfeld said under questioning by the prosecution.

A Minneapolis coroner and an independent medical examiner had ruled in June 2020 that Floyd’s death had been a homicide.

The Hennepin County Medical Examiner had said Floyd died of “cardiopulmonary arrest”. Forensic doctors who performed the independent autopsy had said the evidence pointed to homicide by “mechanical asphyxia”, meaning from some physical force that interfered with oxygen supply.

Under questioning by Chauvin’s lawyer, Langenfeld acknowledged that fentanyl and methamphetamine – both of which were found in Floyd’s system – can cause hypoxia or oxygen deprivation.

The Hennepin County coroners report, however, had listed fentanyl and methamphetamine use as “significant conditions” but not as a “cause of death”.

Minneapolis police Inspector Katie Blackwell, commander of the training division at the time of Floyd’s death, also took the stand on Monday.

She said Chauvin, whom she had known for about 20 years, received annual training in defensive tactics and use of force and would have been trained to use one or two arms – not his knee – in a neck restraint.

“I don’t know what kind of improvised position that is,” she said, after being shown a photo of Chauvin with his knee on Floyd’s neck.

She said Chauvin also was a field-training officer, receiving additional training so he would know what prospective officers were learning in the academy. 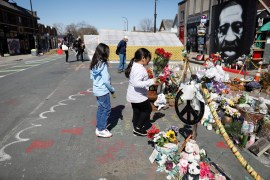 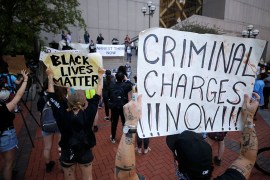 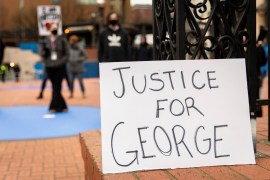 George Floyd’s uncle says the trial is ‘like somebody sticks their hand in your chest and rips your heart out’. 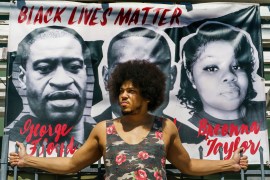 What to expect in week two of the Derek Chauvin trial

Prosecution calls Minneapolis chief of police to testify in murder trial of Chauvin in killing of George Floyd.