India on Friday posted yet another record daily rise in coronavirus cases as hospitals across the country ran out of beds and oxygen.

A United States military plane brought the first emergency supplies as part of a huge international aid operation to help the country battle its devastating surge.

Several Indian states run out of coronavirus vaccines a day before a planned widening of a nationwide inoculation drive, authorities said.

Inoculation centres in the financial capital of Mumbai will shut for three days from Friday because of the vaccine shortage, authorities said.

Delhi’s Chief Minister Arvind Kejriwal urged citizens not to show up at vaccination centres on Saturday, as doses had not yet arrived.

In Karnataka, home to the tech hub of Bengaluru, the southern state’s health minister said its vaccination drive for adults would not begin on Saturday.

Qatar Airways said it will ship medical aid and equipment to India free of charge from global suppliers to support international efforts to tackle the second COVID-19 surge in the country.

The airline intends to transport 300 tonnes of aid from across its global network to Doha where it will be flown in a three-flight cargo aircraft convoy directly to destinations in India where it is most desperately needed.

Akbar Al Baker, Qatar Airways CEO said: “The State of Qatar has a long and special relationship with India, and we have watched with great sorrow as COVID-19 has once again caused a significant challenge to the country.”

Also on Friday, television journalist and senior anchor Rohit Sardana died of COVID-19, leaving “a huge void in the media” according to India’s Prime Minister Narindra Modi, who offered his condolences on Twitter.

Rohit Sardana left us too soon. Full of energy, passionate about India’s progress and a kind hearted soul, Rohit will be missed by many people. His untimely demise has left a huge void in the media world. Condolences to his family, friends and admirers. Om Shanti.

“China is willing to enhance cooperation with India on fighting COVID-19 and provide support and assistance to India,” state television quoted Xi as saying.

Expert: ‘The state has not prepared well enough’

Rijo John, a health economist and adjunct professor at the Rajagiri College of Social Sciences in Kerala said the country did not prepare “well enough” for the second wave.

“India was lucky enough to have a second way, which was delayed compared to many other countries out there, and we had … long time to see what happened to the rest of the world in terms of how severe the second wave was.

“And unfortunately, as a public health researcher, I failed to see the kind of progression that I was expecting the government would be doing in the last year.

“It’s an unfortunate situation. Everybody is responsible. I mean, not just the federal government but also the state governments are responsible to an extent.”

A Malaysian Muslim group praised Muslims who opened mosques in India to be used as healthcare wards as India’s COVID-19 crisis deepens.

Mohd Azmi Abdul Hamid, president of the Malaysian Consultative Council of Islamic Organization, said: “The appreciation was not a display to show off Muslims’ good deeds but an honest duty of Muslims to render help to anyone who is in distress.”

“The Muslim organisations and individuals, who have come forward to help alleviate the growing burden on the country’s healthcare system by offering critical patients oxygen supplies and bed space, is truly commendable,” he said in a statement.

This year’s Twenty20 World Cup could be moved to the United Arab Emirates if the COVID-19 crisis does not subside in India, the country’s cricket board said.

The governing International Cricket Council (ICC) said this month it was sticking to hosting the event in India but had back-up plans, without specifying an alternative location.

“It would be the UAE,” Board of Control for Cricket in India (BCCI) general manager Dhiraj Malhotra told the BBC.

The UK bank Barclays has rushed out 1 million pounds ($1.4m) worth of medical supplies to India in the last week to help communities in the country tackle the surge in COVID-19 cases.

“We are very focused on India right now, which is our second biggest employee location,” Chief Executive Jes Staley told reporters after the bank’s first-quarter results.

Staley said Barclays – which has roughly 20,000 employees in India – had directed money from its charitable funds to partners in India.

An acute shortage of medical oxygen has worsened India’s ferocious second wave of the coronavirus, with hospitals forced to turn patients back as families scramble to arrange oxygen cylinders for their loved ones being treated at home.

In such a scenario, at least two gurdwaras or Sikh temples in and around the capital, New Delhi, have arranged an “oxygen langar” to provide free oxygen to the COVID-19 patients who need it.

Uganda has detected the Indian variant of the coronavirus, igniting fears the East African nation could suffer a resurgence of cases just when its outbreak has waned, a senior health official said.

“Yes, we have got one individual who has that variant,” Pontiano Kaleebu, head of the government-run Uganda Virus Research Institute (UVRI) told Reuters.

The variant, he said, had been detected in recent days on a Ugandan who had returned from a visit to India.

Dentists step up to treat patients in Mumbai

A group of dentists in India’s Mumbai have joined the front-line battle to treat COVID-19 patients.

At NESCO, one of the largest COVID care centres in Mumbai, doctors gather every hour to assess bed availability. All 2,000 beds in the facility are now occupied and they have to constantly move patients who are out of danger from ICU beds and take in those who need critical care.

“Fighting through this pandemic has been a challenge, a challenge in which we have learnt so much,” Dr Sapna Rao said.

French Health Minister Olivier Veran told France Info radio that it was still unclear if available COVID-19 vaccines were effective against the Indian variant, and he added that the danger of this variant must not be underestimated.

France has detected its first three cases of contamination with the B.1.617 variant of the novel coronavirus the country’s Health Ministry said in a statement.

Ukraine bans non-Ukrainian arrivals from India from May 2

Ukraine will impose an entry ban on non-nationals arriving from India from May 2, its deputy health minister said.

Ukraine has reported more than two million COVID-19 cases so far with 44,085 deaths.

Indian scientists and researchers have asked Prime Minister Narendra Modi for access to data that could help research the spread of the coronavirus, news agency Bloomberg reported.

The Indian Council of Medical Research has granular data on all residents who have been tested so far, but the access is restricted.

“The ICMR database is inaccessible to anyone outside of the government and perhaps also to many within the government,” almost 300 scientists wrote.

“While new pandemics can have unpredictable features, our inability to adequately manage the spread of infections has, to a large extent, resulted from epidemiological data not being systematically collected and released in a timely manner to the scientific community.”

Soli Sorabjee, a passionate human rights lawyer, died of COVID-19 on Friday, according to local reports.

He was being treated at a private hospital in New Delhi.

Sorabjee was born in Mumbai in 1930. He started his practice in 1953, and in 1971 he was designated senior counsel by the Supreme Court.

He was the chairman of the UN Sub-Commission on Promotion and Protection of Human Rights from 1998 to 2004, while he was also appointed UN Special Rapporteur for Nigeria in 1997.

All vaccination centres in India’s financial capital of Mumbai have been shut for three days due to a shortage of vaccines, said authorities, as the country posted another record daily rise in coronavirus cases.

India is the world’s biggest producer of vaccines but does not have enough stockpiles to keep up with the second deadly COVID-19 wave, despite Prime Minister Narendra Modi’s government planning to vaccinate all adults starting from May 1. Only about 9 percent of India’s 1.4 billion people have received a vaccine dose since January.

Modi is scheduled to meet cabinet ministers on Friday as the wave of infections cripples the nation’s health system and threatens to affect key businesses as absenteeism grows with staff falling sick or taking leave to tend to sick relatives.

What we know about Indian COVID variant

Scientists are studying what led to an unexpected surge in infections and particularly whether a variant of the novel coronavirus first detected in India is to blame.

Find out the basics here.

India has posted a record daily rise in coronavirus cases of 386,452, while deaths from COVID-19 jumped by 3,498 over the last 24 hours, according to health ministry data.

India has added about 7.7 million cases to its total caseload since the end of February, when its second wave picked up steam, according to a Reuters news agency tally.

US emergency aid arrives in India

The delivery, which flew in from the Travis military base in California, followed talks this week between US President Joe Biden and India’s Prime Minister Narendra Modi.

“The United States is delivering supplies worth more than $100 million in the coming days to provide urgent relief to our partners in India,” State Department spokesman Ned Price said on Thursday.

US officials said the special flights, which will also bring equipment donated by companies and individuals, will continue into next week.

India’s capital territory Delhi has reported its highest ever deaths on a single day due to COVID-19, Indian media reports said.

Government data shows 395 patients died in the last 24 hours in the state, which reported 24,235 new coronavirus cases during the same period. 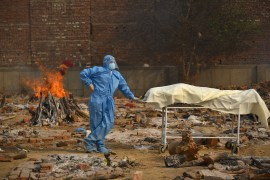 Hospitals and morgues are overwhelmed as India reports another world record number of daily infections. 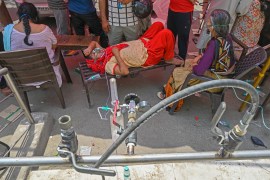 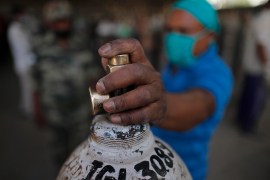 With only one oxygen cylinder and no way to afford another, the family of a cancer patient with COVID face hard choices. 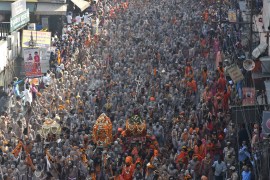