Al Bussaya, Muthanna Province, Iraq – The wind whipped relentlessly across the open deserts of Muthanna province as Ali Thajeel moved his camel herd along the rugged plains in search of greenery.

Decades ago, he remembered, April was a time when the sandy soil turned into grazing land to allow his livestock to gain weight ahead of the scorching summer heat. But in recent years, his camels had to make do with scattered patches of scruffy grass.

“There’s no rain, and the land is dry. The grass has turned into desert. We have to sell some animals to buy food for the rest. This is what life has become,” said Thajeel, his kaffiyeh pulled tightly across his face to shield it from the dry, dusty air.

During our two-day trip across Muthanna’s deserts, nomadic herders painted a grim picture of an increasingly uninhabitable environment, where temperature increases and erratic rains have eroded the sustenance of animals and humans alike.

The ramifications can already be felt across Iraq, with urban areas suffering from more frequent dust storms, while farming communities struggle to cope with irrigation water shortages and rising soil salinity.

But in the country’s inhospitable deserts, where the margin of tolerance for weather fluctuations is razor-thin, climate change is spelling an existential crisis for pastoralist tribes.

The wells that once sustained livestock have long run dry. Rather than depending on natural water sources, nomads rent trucks to fetch water from nearby towns.

“This whole water truck will last just one day,” said Kadhum Adshaan as he emptied its precious contents into a water container for his animals. “Tomorrow, I have to go back for more.”

As we spoke, clouds gathered in what Adshaan hoped would be the first proper downpour this year. His hopes were soon dashed when only a few droplets trickled from the sky, barely enough to wet the ground.

“This summer rain is useless,” he grumbled.

Data obtained from the Iraqi government showed that average yearly rainfall has become more erratic in this area since the 1970s, and that average annual rainfall for the last twenty years was 10 percent lower than in the three decades prior. 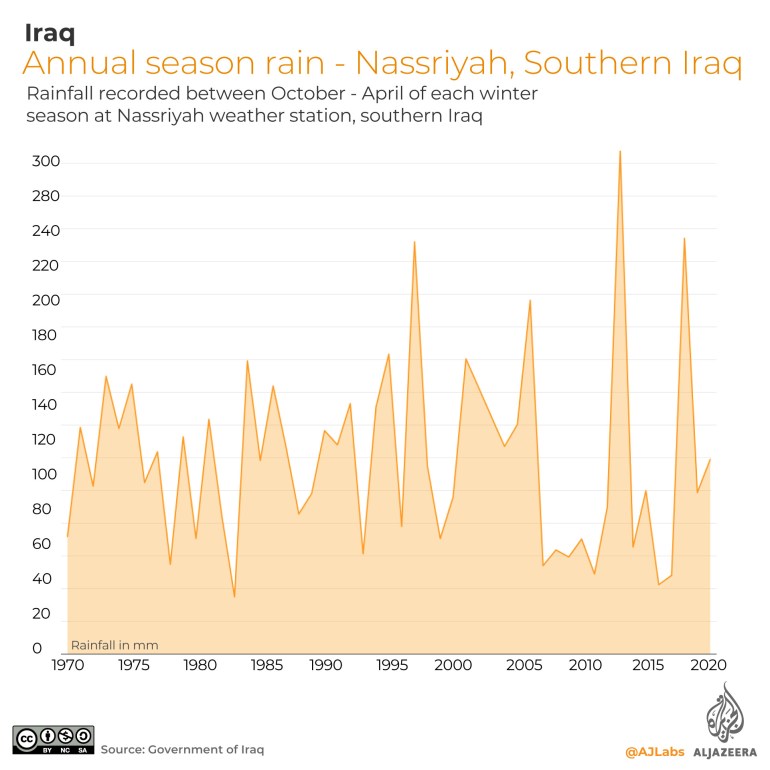 A community under siege

In the past, elders say, several Bedouin families would group together in small, temporary settlements. But with the low density of vegetation, we only found individual tents spread out kilometres apart, as each family requires more land to support their flock.

The lack of greenery also forces herders to migrate longer distances in search of food for their livestock, even as potential grazing land is increasingly limited by investment projects and border closures.

“People quarrel for grass, fighting each other,” said Rahi Khamis, who keeps a herd of 200 sheep. “In the past, there were no problems. Your neighbour was like your brother.”

The summers have become too hot to bear in their traditional, rudimentary tents made of animal fur, pushing many to find reprieve in nearby villages and towns, where they rent farming land for their livestock to feed on.

To pay for water and land use, the herders have no choice but to sell their only asset – their livestock – which has led to a steady decline in herd size.

The growing hardship has driven a wedge between generations, with elders doubling down to preserve their way of life, while youth look to an uncertain future elsewhere.

“I never thought about leaving this life and I never will. I feel comfortable here from the psychological point of view,” said 46-year old Khamis, as he gazed across the open plains. “But the youth don’t obey me. They don’t like this life.”

Khamis’ anger is directed at his 17-year-old son Sajad, who left the family’s modest desert dwelling for a job as a porter in a wholesale market in the nearby city of Nassriyah.

“They say we want to go out, meet people, they want air conditioners and studies. Here, we live without all those things,” said Khamis, who like many others, has no formal education or other source of income.

The exodus of youngsters means those who stay behind must shoulder a greater share of the tiring chores required to maintain large animal herds.

There are no statistics on how many Bedouins left to the cities, but elders estimate only hundreds remained, raising fear that their way of life could disappear within a generation.

‘No one is helping’

Even though Iraq ranks among countries where the impact of climate change is most tangible, the government’s response has been hamstrung by decades of conflict and instability as well as its own oil dependency.

“There isn’t a policy to regard climate change in a systematic way,” Ali Al Saffar, Middle East and North Africa Programme Manager at the International Energy Agency, told Al Jazeera.

“Generally, the relationship between Iraq and broader climate discussions is centred around what will climate change do to our energy markets, what will it do to the demand for oil?”

Iraq’s oil industry also significantly contributes to global warming because its oil fields lack gas capture facilities that would prevent greenhouse gases from leaking into the atmosphere. A recent Bellingcat investigation found that in 2018, the oil fields around Basra flared more gas than all of Saudi Arabia, China, Canada, and India combined.

At the Paris climate summit in 2016, Iraq agreed to a minimum one percent reduction in total emissions by 2035, and a reduction of up to 13 percent if the country received the necessary financial and technical support.

But like many other countries, Iraq is lagging behind on its promises under the Paris agreement, which was weakened by the previous United States administration’s withdrawal, and after the coronavirus diverted attention and funding elsewhere.

“National commitments globally are far behind where the world needs to be to reduce temperature rise to a maximum of two degrees Celsius,” said Sami Dimassi, regional representative for West Asia at the United Nation’s Environment Programme (UNEP).

Last year, UNEP began working with the Iraqi government on climate projections to assess the vulnerability of different communities and come up with adaptation measures.

“[For nomadic pastoralists], it could be shifting grazing patterns to allow regeneration and maybe expanding on the area they’re moving around in, maybe looking at a different composition of livestock,” said Dimassi.

But the nomads, reclusive and distrustful of outsiders, expect little from a government that struggles to deliver most basic services amid pervasive corruption and a painfully cumbersome bureaucracy.

“No one from the government is helping. We depend on ourselves only,” said Kadhum Adshaan.