Some of the most intense fighting in Myanmar since the country’s military seized power in a coup on February 1 erupted in eastern Myanmar near the Thai border early on Tuesday, as ethnic minority Karen insurgents attacked an army outpost.

The clash came as the generals said they would “positively” consider suggestions from the Association of Southeast Asian Nations (ASEAN), which met at a special summit on Saturday. Leaders called for an end to the violence, and urged dialogue with the elected government that was overthrown.

The Karen National Union said its forces had captured an outpost of the Myanmar army close to the border with Thailand, after launching an attack just before dawn.

The camp had been occupied and burned down, the armed group’s head of foreign affairs, Saw Taw Nee, told Reuters news agency. He said there had been fighting in other places too, but did not elaborate. 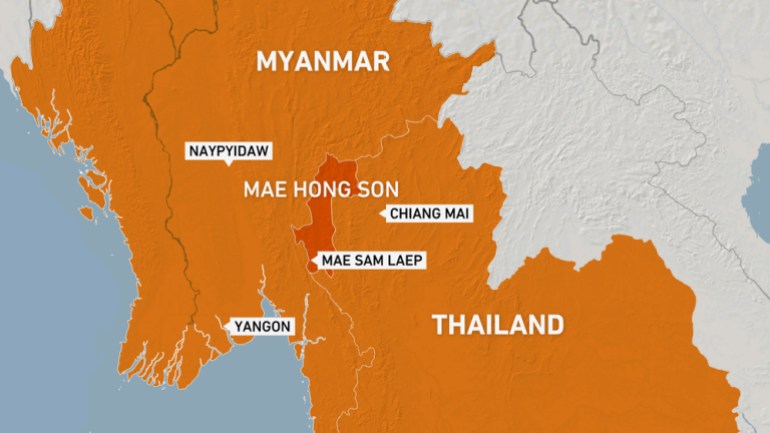 People across the Salween River, which follows the border between the two countries, earlier reported hearing gunfire, while video posted on social media showed fires and smoke rising from the forested hills.

“There has been heavy fighting at the Myanmar army outpost opposite Mae Sam Laep,” a provincial official from the northwestern Thai town of Mae Hong Son told Reuters. “Our security officials are assessing the situation but so far there has been no report of impact on the Thai side.”

One person on the Thai side was mildly hurt, the official said.

Myanmar’s military, known as the Tatmadaw, made no immediate comment.

Fighting in the area has escalated since the generals seized power in a February 1 coup and plunged Myanmar into turmoil. The military sees itself as the only institution that can unite the ethnically diverse country of 53 million.

“This is very concerning,” Al Jazeera’s Scott Heidler, who is in Bangkok, said of the latest escalation. “This is something we have seen going on since the February coup.”

In rare comments on Monday, former US President Barack Obama said he was “appalled by (the) heartbreaking violence” the military had used against civilians who were opposed to its power grab.

Obama, who championed engagement with the military as part of Myanmar’s democratisation during his two terms in office, said he supported efforts by the United States and other countries to sanction the generals and make clear the cost of their actions.

“The military’s illegitimate and brutal effort to impose its will after a decade of greater freedoms will clearly never be accepted by the people and should not be accepted by the wider world,” he said in the comments, which he shared on Twitter.

“Myanmar’s neighbors should recognize that a murderous regime rejected by the people will only bring greater instability, humanitarian crisis and the risk of a failed state.”

The video clip ‘This Is Our Revolution’ was produced by the Kachin Youth in Laiza and calling young generation to make a wise decision to stand on the side of Justice.

“You Have To Make A Strong decision, Do Or Die?”#WhatsHappeningInMyanmar#KIA_KIO#Kachinyouth pic.twitter.com/wQYibiMl86

The country had been relatively calm since the ASEAN meeting in Jakarta, which was attended by army chief Min Aung Hlaing.

The military, in its first official comment on the meeting, said it would give “careful consideration to constructive suggestions”.

“The suggestions would be positively considered if it … serves the interests of the country and was based on purposes and principles enshrined in” ASEAN, it said in a statement published on Tuesday.

Myanmar joined the 10-member organisation during a previous military regime in 1997.

After years of relative quiet, there have been renewed clashes between the army and some of the ethnic armed groups mostly in the country’s border areas.

Some of the armed groups have expressed support for the opponents of the military, whose forces have killed some 753 civilians to try and stamp out the continuing protests, according to the Assistance Association for Political Prisoners, which has been tracking arrests and deaths.

In its latest humanitarian update on the situation in Myanmar, the UN Office for the Coordination of Humanitarian Affairs said that fighting had escalated in Kachin State, Northern Shan State, Kayin State and the Bago Region in the months since the coup.

About 3,000 people crossed the border into Thailand at the end of last month after the Tatmadaw bombed eastern border areas.

An estimated 40,000 people have been forced from their homes as a result of the escalation in fighting, the UN said. Most are from Kayin State.