Beirut, Lebanon – With a presidential election slated for next month, millions of Syrian refugees in Lebanon have been urged to get out and vote.

Syrian state television filmed people registering at the embassy in Lebanon as an “expression of their resilience against unjust Western schemes and sanctions”, according to the reporter.

Parliament announced last week that the presidential election would be held on May 26. According to Syrian state media, 22 people have submitted their nomination requests so far, including incumbent President Bashar al-Assad. Al-Assad is widely expected to win the vote and rule the war-ravaged country for a fourth seven-year term.

A Syrian man at the embassy in Beirut told the state television reporter that holding elections was an achievement that “complements” the Syrian National Army’s reclaiming much of the country. Several other men expressed the same thoughts.

But not all Syrians shared the sentiment.

“The elections are just a vaudeville show,” said Abu Ali al-Hamoui, 39, likening the election to the French farcical theatre genre.

Al-Hamoui told Al Jazeera he refuses to register for the vote as al-Assad is the guaranteed winner. “They indoctrinate you to support the Baath Party ever since you’re in the first grade,” he said.

Once a schoolteacher in his native rural Hama, al-Hamoui now lives in a town in northern Lebanon, a short drive from Tripoli. His family is scattered across Syria and Turkey. He took part in peaceful protests in his city at the onset of the uprising in 2011 – some of the largest in Syria.

“Then we got threats. First, they told me, ‘You are an educated and decent man. Be careful. We’re watching you,’” he said.

He lived through the siege of Hama that summer and chose to stay. However, after the authorities pulled him over at a checkpoint to notify him he would be called up for conscription soon, al-Hamoui decided it was time to leave.

President al-Assad won the last presidential elections in 2014 with 88.7 percent of the vote. His runner-up endorsed al-Assad during the campaign. In Lebanon, thousands of Syrians gathered at the embassy to cast their vote, many overtly showing their loyalty to al-Assad.

This time, Syrian refugees and expatriates can also register through a Google form shared through their embassies’ social media channels, which requires the information found on their identity cards, their town or city of origin, mobile phone number, parents’ names, and where they live in their current country of residence.

Refugees and expats are not eligible to run for president, however, as they have not been living in war-torn Syria over the past 10 consecutive years.

Western governments and political opponents of al-Assad and the Syrian government have denounced the upcoming presidential elections as a sham and called for a political solution to the conflict first. A US State Department spokesperson and the French foreign affairs ministry told Al Jazeera they do not believe the elections will be free or fair.

They highlighted UN Security Council Resolution 2254, which passed with no objections back in December 2015. It outlines a transitional plan that would include an end to hostilities, a UN-mandated political process, and redrafting the country’s constitution before holding elections.

Haya Atassi of the Syrian civil rights group Syrian Association for Citizens’ Dignity said even those interested in voting fear surveillance and reprisals at the hands of the government.

“Many Syrians are afraid to go to the embassy – especially in Lebanon. You don’t know if your papers could be confiscated,” Atassi told Al Jazeera. “People are afraid to pass through checkpoints, so how can they go to election centres?”

Atassi and her colleagues surveyed 500 displaced Syrians in late 2020 in Syria, Lebanon, Turkey, and across Europe to gauge their views about elections. The results showed that while most supported the vote, they were not convinced they will be free and fair. More than 80 percent said they would not feel safe walking into a Syrian embassy to cast their ballot.

Journalist Hoda al-Khatib, 25, left Syria in 2012 to study at a Lebanese university, and would frequently visit her family on long weekends and holidays. However, after producing a documentary about the uprising in late 2020, al-Khatib said goodbye to her family and friends – knowing she might never see them again.

“Over the past four or five years, I worked on Syria without ever putting my name out there as a journalist,” she told Al Jazeera. “I eventually realised that I had to speak about it. It was a scary decision.”

Al-Khatib unsurprisingly opted out of registering to vote, saying it “won’t make a difference”.

“If anything, they’ll just put me on their radar and cause more problems for someone from my family there,” she said. “It’s like signing up to criminalise yourself.”

Judging by her last visit to Syria, Al-Khatib said she believes the amount of self-censorship is also proof the elections will not be free and fair. “The regime has created this culture of terror. People don’t talk about politics. Everything is on the down low, and everyone is afraid of each other.” 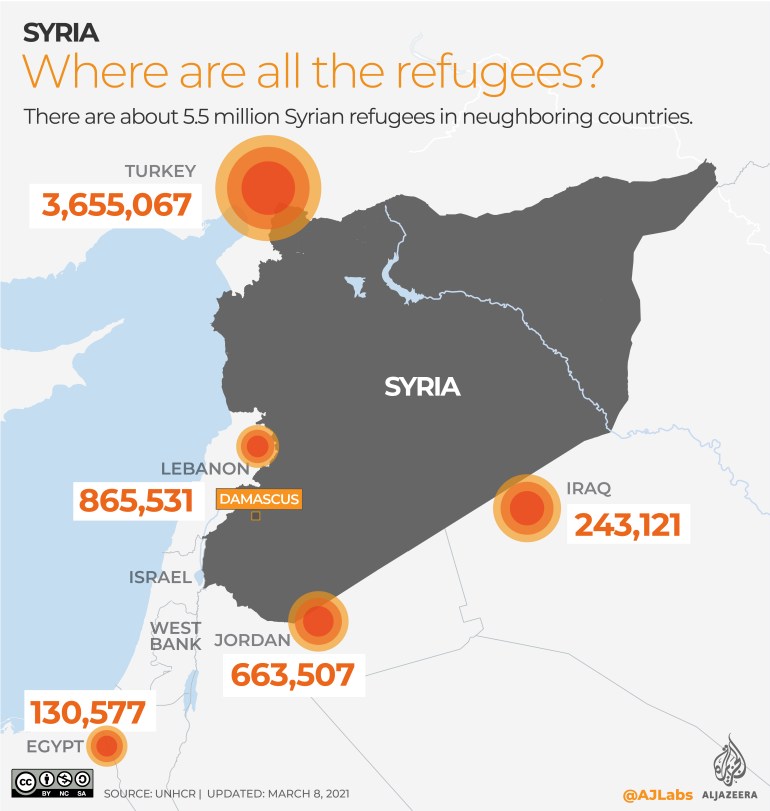 Hostilities in Syria have significantly reduced and the government has been able to reclaim much of the country, minus areas in the north controlled by a variety of armed opposition groups.

In Lebanon, at least 90 percent of Syrian refugees live in poverty, and about half struggle to access an adequate amount of food. That being said, many do not trust claims that returning to Syria will guarantee them the security and safety they desire.

“Back in Hama, the situation is bad: no electricity, no water,” Abu Ali al-Hamoui said. “We had basic infrastructure even before the revolution and relied heavily on agriculture – but now we’re going back to the primitive.”

Al-Hamoui’s friends and family told him that crime is rampant, and the Syrian National Army is forcefully conscripting many young men.

“Every returnee is a potential detainee,” Atassi said. “Many Syrians who fled the country did so ‘illegally’, so in theory they have committed a crime.”

Atassi said the elections will only legitimise the Syrian government in its current form and overshadow barriers for refugees to return such as a $100 entry fee and a 2018 law allowing the government to repossess large swaths of land and real estate.

“If you go back, no one can save you. It’s up to you, your luck, and if you have enough money to go back,” she said.

For those reasons, many Syrians feel taking part in the election could pose a risk and potentially expedite a forced return. A week ago, Denmark announced it would send 500 refugees it hosts back to Syria.

“If you’re just a man who is my age, you’re at risk because you’re avoiding mandatory military conscription,” al-Khatib said. “We were never allowed to criticise Bashar [al-Assad] – imagine voting against him. We learned our nine-year-long lesson.”