Israeli police on Sunday removed barricades from near the Al-Aqsa Mosque compound in occupied East Jerusalem, in a move apparently aimed at easing tensions after days of violent confrontations.

The barricading of the area near the Damascus Gate in East Jerusalem’s walled Old City – a popular gathering place for Palestinians during the holy month of Ramadan – was partly blamed for several nights of tensions.

Israeli police said the barriers were put in place as part of coronavirus restrictions.

The decision came “following consultations with local leadership, religious leadership, situation assessments, while taking into consideration the shop owners who need to make a living, and in order to lower the level of violence,” an Israeli police spokesman told AFP news agency.

“Our forces are still deployed on the ground, and we won’t let violence resurge,” the spokesman said.

Violent clashes erupted on Thursday night after the arrival of far-right Israeli groups at the end of a march during which they harassed Palestinians and chanted “Death to Arabs”.

Hundreds of Palestinians have been wounded and dozens of others arrested in several days of violence.

Hundreds of Palestinians held celebratory rallies in the plaza, watched over by police.

They chanted celebratory remarks and waved Palestinian flags before minor scuffles erupted when Israeli police attempted to confiscate the flags.

But the plaza remained open, with police maintaining a heavy presence in the area into the early hours of Monday.

Samir Gheith, a 66-year-old Palestinian from Jerusalem, said people had been looking forward to gathering at Damascus Gate during Ramadan after it was closed last year due to coronavirus restrictions.

“I think they don’t want to see us be happy,” he told AFP, referring to the initial decision to barricade the plaza.

“But then they came to understand that they needed to put a stop to all these tensions,” he said.

The Palestinian leadership wants East Jerusalem to be the capital of their future state. Its fate has been one of the thorniest issues in the peace process, which ground to a halt more than 10 years ago.

Ahmad Tibi, a member of the Israeli parliament with the Joint List, the Palestinian-majority electoral alliance, said on Monday that placing barricades in the Old City was a mistake from the start.

In a statement he said the decision to reopen the gates is correct, but “they should stop attacking the Palestinians”.

The events in Jerusalem also led to an escalation in the besieged Gaza Strip.

While Palestinians in Gaza staged demonstrations in solidarity with those in Jerusalem, the armed wing of Hamas – the group that governs the enclave – warned Israel “not to test” its patience.

Overnight Friday into Saturday, several rockets were fired from Gaza towards Israel. The Israeli military said it had intercepted some rockets fired from the Strip by its air defences and launched air attacks targeting Hamas positions in the strip.

Hamas did not claim responsibility for the rockets but Israel considers the group responsible for all fire emanating from the enclave, which remains under a strict Israeli land, sea and air blockade since 2007.

On Monday, Hamas spokesman Hazem Qassem said that the removal of the barricades demonstrated the  Palestinian people’s ability to “defy, resist, and impose their will on the occupier”.

“Our unity … and resistance in all its forms, will continue to be a guarantee of our ability to act on national issues in the face of the occupation,” he added.

Meanwhile, Israel on Monday said it has closed the fishing zone off the coast of Gaza – home to 2 million people – until further notice.

It had earlier reduced the extent of the fishing zone to just 9 nautical miles offshore from 15 nautical miles in retaliation for the launch of rockets from the Palestinian enclave.

In practice, Israel only allowed fishing up to 12 nautical miles until 2006, when the fishing zone was reduced to six and later to three.

Israel maintains a heavy naval presence, restricting any traffic in and out of the enclave as well as the distance Gaza’s fishermen can travel to fish, severely affecting the livelihoods of some 4,000 fishermen and at least 1,500 more people involved in the fishing industry. 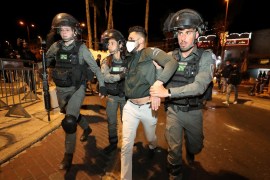 At least 105 Palestinians wounded in clashes in occupied East Jerusalem that ensued after march by far-right Israelis. 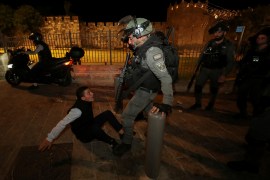 Scuffles in Jerusalem in second night of violence

US President Joe Biden calls for calm as he denounces rhetoric of ‘extremist protestors’ who targeted Palestinians. 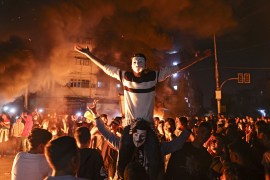 More arrests in Jerusalem as rockets fired from Gaza 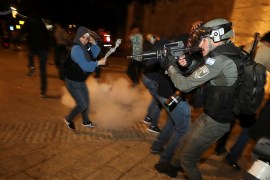