A Libyan cabinet meeting in the city of Benghazi was postponed after gunmen loyal to renegade military commander Khalifa Haftar prevented a government delegation from entering the city.

The delegation – which was forced to fly back to the capital Tripoli – was planning to prepare for the first visit to Benghazi by Dbeibeh since he assumed office in March. The meeting planned for Monday aimed to demonstrate the unity government’s progress in ending years of division between warring factions.

One source, who spoke on condition of anonymity, told Al Jazeera the delegation included a number of security officials, the prime minister’s bodyguards and other government staff.

Mohamed Hamouda, a spokesman for Dbeibeh’s interim government, said in a social media post on Sunday the planned visit to the country’s east had been postponed, but he provided no details.

Preparations were under way to reschedule the trip, Hamouda said.

Dbeibeh had previously announced his intention to hold cabinet meetings in different cities across the country, most notably in Benghazi – Libya’s second-largest city and one of Haftar’s strongholds.

The incident underscores the continued friction between rival camps in Tripoli in the west and Benghazi in the east – the stronghold of Haftar’s Libyan National Army (LNA).

Rival administrations were formed in the west and east in 2014, further dividing a country already beset by chaos and violence that followed the 2011 NATO-backed uprising against leader Muammar Gaddafi.

Dbeibeh was appointed in March to lead the new Government of National Unity (GNU) through a UN-facilitated process aimed at bringing peace and stability to Libya with the reunification of state institutions and an election in December.

The GNU was approved by the eastern-based parliament and the Tripoli and Benghazi administrations, which peacefully handed over their powers. Until Sunday’s incident, Tripoli-based GNU ministers and other officials were able to visit Benghazi freely.

The war-torn North African country faces a myriad of challenges.

Last week, Dbeibeh met displaced people in Tripoli who fled Benghazi and his comments to them reportedly angered factions in the east. Some protesters rallied against Dbeibeh there on Sunday.

Dbeibeh’s visit to Benghazi on Monday was to have been the first by a Tripoli-based prime minister in years, a moment intended to encapsulate a rare opportunity to end its conflict. 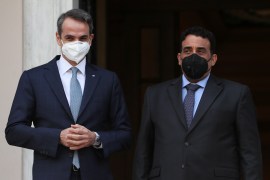 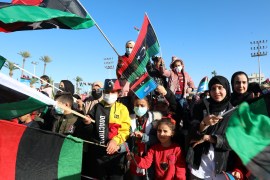 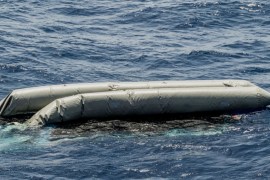