The daily coronavirus death toll and number of infections in India – in the grip of a rampaging second wave of the pandemic – have passed new world records as the government battled to get oxygen supplies to hospitals overwhelmed by the hundreds of thousands of new daily cases.

Authorities scrambled anew on Saturday to supply medical oxygen to Indian hospitals where COVID-19 patients were suffocating amid low supplies.

India has hit a rate of one COVID-19 reported death every four minutes in New Delhi as the capital’s underfunded health system buckled.

Queues of COVID-19 patients and their fearful relatives were building up outside hospitals in big cities across India, the new world pandemic hotspot which has now reported nearly one million new cases in three days.

Another 2,624 deaths, a new daily record, were reported in 24 hours, taking the official toll to nearly 190,000 since the pandemic started.

A further 346,786 new cases were also reported, taking India’s total past 16.6 million, second only to the United States.

Many experts are predicting the current wave will not peak for at least three weeks and that the real death and case numbers are higher.

Stung by criticism of its lack of preparation before the new wave of infections, the government has deployed military planes and trains to get oxygen from the far corners of the country to New Delhi.

TV news channels showed an oxygen truck arriving at New Delhi’s Batra Hospital after it issued an SOS saying it had 90 minutes of oxygen left for its 260 patients.

“Please help us get oxygen, there will be a tragedy here,” Delhi Chief Minister Arvind Kejriwal appealed to Prime Minister Narendra Modi in a news conference on Friday.

The city’s government said it would begin setting up buffer stocks of oxygen to speed supplies to hospitals when they are within hours of running out.

“We were using about 8,000 litres of oxygen per day during the period, but then unfortunately, the last few days it has been reduced to around 2,000 or 1,500 litres per day that is coming in, with the result that patients are getting in great trouble,” he said.

Kaul added that suppliers of oxygen to Batra for the last 30 years were unresponsive.

“They have put off their telephone calls, we can’t email them. Obviously, they don’t have any oxygen.”

“Our supply was delayed by seven-eight hours on Friday night and the stock we received last night is only 40 percent of the required supply,” the newspaper quoted the hospital’s medical superintendent, Dr DK Baluja, as saying.

Crematoriums across Delhi said they were full and asked grieving families to wait.

One charity has set up an overflow crematorium in a car park, with makeshift funeral pyres built to deal with the mounting deaths.

Volunteers have come together in cities across the country to help patients and their families through social media and other networks.

Inayat Singh Kakar, a citizen volunteer based in Delhi, told Al Jazeera requests from patients included information on issues such as oxygen availability, accessing ambulance services and the availability of hospital beds.

“Despite the government setting up information portals to keep people updated with real-time information like bed availability, these portals have not really been functioning … there’s very little coordination between hospitals themselves,” she told Al Jazeera.

Kakar said the situation was “extremely dire” and more desperate this year than when the pandemic first started.

“Last year when we were getting, you know, calls for help, it was one person or two people in a household who were infected. But this year entire households are being affected by COVID-19.”

“The fact that Twitter has become the national COVID-19 helpline is telling,” Kakar added.

India has also been trying to acquire oxygen from overseas.

Al Jazeera’s Elizabeth Puranam, reporting from the capital, said so far many countries around the globe expressed support for India’s fight against the recent COVID-19 crisis and were looking for ways to help the country.

“The scale of the crisis in India perhaps has not been seen anywhere else since the start of the pandemic,” she said.

“India has asked its external affairs ministry, with all of the embassies overseas, to source and import 50,000 metric tonnes of oxygen to save people’s lives. Its defence ministry is also airlifting 23 mobile oxygen generation plants from Germany.

“The US Chamber of Commerce has asked the Biden administration to free millions of doses of the Oxford-AstraZeneca vaccine, which is in storage in the US, and ship them to India as well as countries like Brazil hit hard by the pandemic.”

The government has pressed industrialists to increase the production of oxygen and other life-saving drugs in short supply.

The crisis is also being felt in other parts of India, with several hospitals issuing public notices that they do not have medical oxygen.

Local media reported fresh cases of people dying in the cities of Jaipur and Amritsar.

One “oxygen express” carrying 30,000 litres for hospitals arrived in Lucknow at dawn on Saturday, where armed guards were waiting to escort trucks to hospitals.

Lucknow has been one of the worst-hit cities, with hospitals and crematoriums inundated with patients and bodies, and officials said the liquid oxygen would only be enough for half a day’s needs.

Health experts said India became complacent in the winter, when new cases were running at about 10,000 a day and the pandemic seemed to be under control, lifting restrictions that allowed for the resumption of big gatherings.

Others said it could also be a more dangerous variant of the virus coursing through the world’s second most populous country where people live in close proximity, often six to a room.

“While complacency in adhering to masks and physical distancing might have played a role, it seems increasingly likely that this second wave has been fuelled by a much more virulent strain,” wrote Vikram Patel, professor of global health at Harvard Medical School, in the Indian Express.

WHO emergencies director Mike Ryan said reducing transmission in India would be a “very difficult task” but the government was working on limiting mixing between people, which he said was essential. 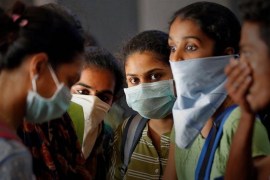 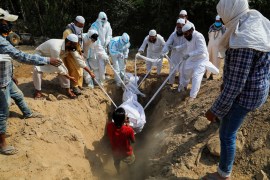 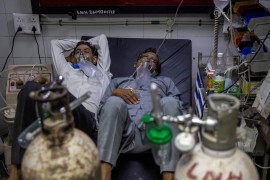 India set another record for COVID cases on Friday, with reports of bodies piling up at crematoriums and burial grounds. 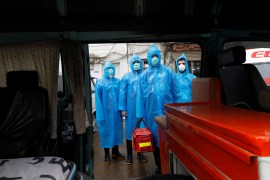 Edhi Foundation writes to Modi, offering to send ambulances and medical staff to help its neighbour fight the virus.